That Patriotic Apple Pie Is Less Likely to be Frozen

Frozen cakes and pies declined 2.4 percent from 2009-2014 as consumers focus on gourmet flavors and shift towards viewing pies and cakes as an indulgent snack. According to Mintel research, 41 percent of consumers claim to eat prepared snacks between meals. 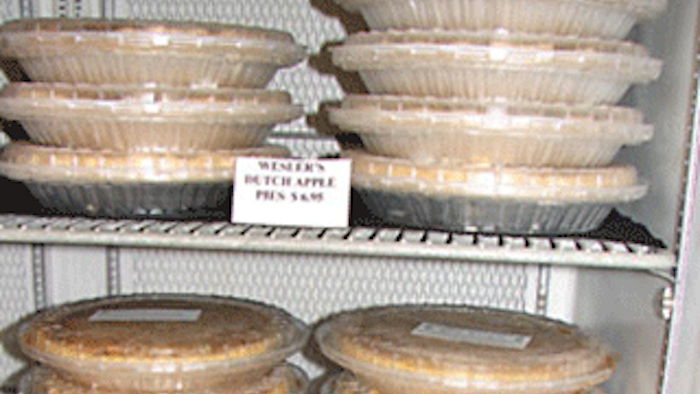 CHICAGO (PRNewswire) —Few things are more American than baseball, blue jeans and apple pie, just so long as that apple pie isn't frozen. While total retail sales of prepared cakes and pies grew 24 percent from 2009-14 to reach $11.2 billion, frozen and refrigerated cakes and pies was the only segment to decline (2.4 percent), as consumers focus on fresh flavors and shift towards viewing pies and cakes as an indulgent snack. In fact, according to new Mintel research, some 41 percent of consumers claim to eat prepared cakes and pies as a snack between meals, a higher percentage than many other occasions, including for a special occasion dessert (18 percent).

In-store baked cakes and pies are driving the category with sales representing more than half of the overall category (52 percent), followed by shelf-stable cupcakes and brownies at 23 percent. Nearly half of consumers who eat prepared cakes and pies (46%) view them as an indulgence and 42 percent indicate they are open to trying new flavors of these items. Some 61 percent agree gourmet or premium products are worth paying more for, including 72 percent of those aged 25-34.

"The snacking mindset has permeated the dessert segment, as people are mindful of what they eat, but at the same time, want to indulge and treat themselves as well," comments Mintel food analyst Amanda Topper. "Much as we've seen with the high-end cupcake and donut trends, consumers are willing to pay a little bit extra for a small indulgence made with quality ingredients. Since almost two-thirds value taste over nutrition and more than two-thirds would like to see more flavor variety, this presents an opportunity to offer more unique, high-quality offerings, especially to younger consumers who are more brand loyal and willing to pay the price premium."

Private label represents the largest category market share at 38 percent, a larger share than the market share of all five brand leaders combined.  The majority of sales within the prepared cakes and pies category are in supermarkets, which make up 65.8 percent of the market. Men are significantly more likely than women to eat prepared cakes and pies as part of, or in place of, a meal. Some 24% eat them as part of breakfast, and 25 percent eat them as part of lunch, while 13% use them as a meal replacement altogether. Women are significantly more likely than men to eat them as a dessert (75 percent, compared to 66 percent of men).

"Over two-third of consumers have eaten some type of RTE cake or pie within the past six months, and the majority are open to experimenting with flavors," notes Amanda. "To that end, they can stay interested with hybrid flavors, such as sweet and salty options, or seasonal and limited-edition varieties. Natural ingredients, without additives or preservatives, are also important to consumers who buy prepared cakes and pies, so manufacturers should focus on promoting the quality of their ingredients, and promote them via easy-to-read ingredient lists. At the end of the day, people are willing to indulge, but they just want to make sure the calories are worth it."