Dynamic Dim Sum in the Land of Barbecue

Bo Lings, which opened in 1981 and began dim sum service in 1987, for years has drawn out-the-front door weekend lines for dim sum at its location in the former Kansas City Board of Trade building a couple blocks from Kansas City's Country Club Plaza. 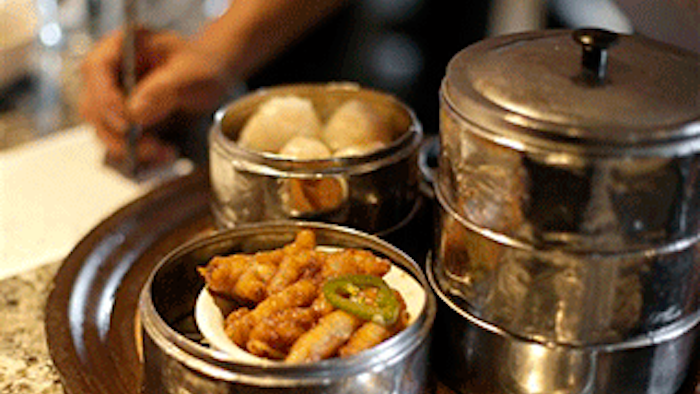 KANSAS CITY, Mo. (AP) — Yes, even in the Land of Barbecue, there are other artery-challenging options beyond the slab.

The weekend crowds at Bo Lings Chinese restaurant have long suggested that plenty of people in this barbecue fumes-driven metro often prefer their pork steamed amid shrimp in a dumpling, diced in rice noodles or laced with barbecue sauce and stuffed into a fluffy, white steamed bun.

Bo Lings, which opened in 1981 and began dim sum service in 1987, for years drew out-the-front door weekend lines for dim sum at its location in the former Kansas City Board of Trade building a couple blocks from Kansas City's Country Club Plaza. Owners Richard and Theresa Ng, who in 2008 were named Restaurateurs of the Year by the Greater Kansas City Restaurant Association, moved about two years ago to their current larger spot in the high-traffic, touristy Plaza, an outdoor shopping and entertainment district.

The new Bo Lings has more seating, ultra-modern decor and a revamped menu that in addition to traditional Chinese fare, also includes sushi, a bakery and an elaborate happy hour.

But it's the dim sum that draws in the crowds.

Dim sum diners at Bo Lings range from families who gather in large, multi-generational groups and linger for a few hours over pots of jasmine tea while they collect stacks of small dim sum plates and chase their small children around the room to couples in tiny booths who move in and out in a matter of minutes once their preferred carts make it to their vicinity.

Despite the crowds, the Bo Lings dim sum carts usually manage to wend their way through the tables and booths in steady streams, plying patrons with steamy selections including siu mai (shrimp and pork dumplings), roast duck, fried rice noodles, garlic cucumbers, rice porridge, pan-fried shrimp and chive dumplings and tofu with shrimp. Every now and then, a favorite item — like the barbecue pork buns, of course — may run low, but it can help to ask a server to grab some from the kitchen. They'll often oblige.

It can be wise to arrive at 11 a.m. when the cart service begins to avoid the later rush, and Sundays are often more crowded than Saturdays.

Bo Lings, which does a brisk take-out service, too, has a few other locations around Kansas City, but only offers weekend push cart dim sum on the Plaza and at its suburban Kansas City location in Overland Park, Kansas. Bo Lings at the City Market near downtown has limited dim sum offerings on its daily menu.

And, if the craving resurfaces, each Bo Lings is likely only a short hike from at least one barbecue spot.