Lake Huron is fertile fishing territory for the first time since the chinook salmon numbers nosedived in the early 2000s. Native fish species, such as walleye and lake trout, that had been kept down by the alewife-salmon dominance are bouncing back. 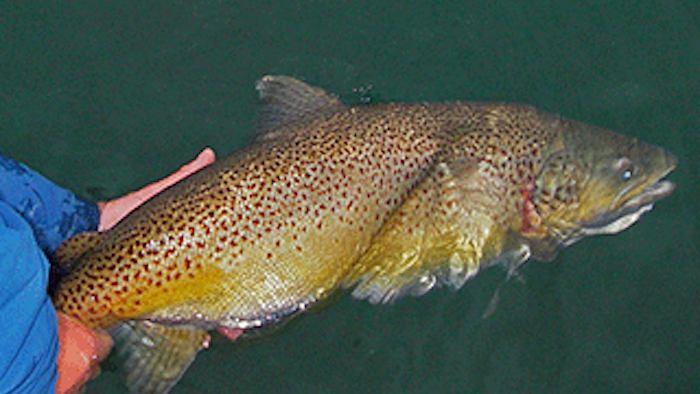 TRAVERSE CITY, Mich. (AP) — More than a decade after its prized chinook salmon crashed, Lake Huron is fertile fishing territory once more, with fast-growing populations of native species such as walleye and lake trout, biologists say. Now the challenge is convincing anglers to take the bait.

Sport fishing on the second-largest of the Great Lakes in terms of surface area lags far behind its heyday, when chinook were plentiful following their introduction in the 1960s, according to the Michigan Department of Natural Resources. Anglers loved the big fish's feisty spirit and came from across the U.S. to do battle with "king salmon," which often weigh up to 40 pounds and exceed three feet in length.

But chinook numbers nosedived when their main prey, the alewife, collapsed in the early 2000s, which scientists attributed to invasive zebra and quagga mussels that arrived from Europe in cargo ship ballast tanks. The filter-feeding mussels gorged on phytoplankton — microscopic plants at the base of the aquaticfood chain — causing alewives to go hungry.

So thorough was the stripping of Lake Huron that its water clarity exceeded that of Lake Superior for the first time on record, said Gary Fahnenstiel, senior scientist with Michigan Technological University's Great Lakes Research Center.

It was a devastating blow to charter boat skippers, marinas, tackle shops and related businesses. A study by Michigan State University and Michigan Sea Grant found the number of Lake Huron charter excursions declined by half between 2002 and 2009. Terry Walsh, president of the Michigan Charter Boat Association, says the number of vessels for hire operating on the lake has plummeted.

But there's a silver lining: Native fish species that had been kept down by the alewife-salmon dominance are bouncing back.

"We've got a really interesting, diverse fishery," said Frank Krist, chairman of the Lake Huron Citizens Advisory Committee. "The walleye fishing in Saginaw Bay is some of the best ever. It's just unbelievable this year."

The alewife, a small forage fish, is an exotic species that found its way into the Great Lakes more than a century ago. It became so abundant that during periodic die-offs, beachgoers were greeted with stomach-turning mounds of rotting carcasses that had washed ashore.

The Michigan DNR began stocking Lakes Michigan and Huron with chinook and coho salmon in the 1960s to get the alewife under control. It was a resounding success, boosting a Great Lakes sport fishing industry with an estimated annual value of $7 billion.

But Lake Huron's native fish were the losers. Alewives feasted on walleye babies, keeping their numbers down. Lake trout's reproduction was hobbled by an enzyme that weakened their eggs — an enzyme that came from alewives, on which the trout fed.

With the alewife crash, its victims are surging — to the point that the DNR has ended walleye stocking and may do likewise with lake trout, said Todd Grischke, Lake Huron basin coordinator. Atlantic salmon, steelhead trout and smallmouth bass are also on the rise.

"There are many species of fish to catch and their populations are very good," Grischke said. "No, it's not chinook salmon ... but there is some fantastic fishing to be had."

Still, it appears that many anglers remain unconvinced. Surveys at key ports along the coast show that use of Huron for fishing — based on a statistic known as "angler hours" — has declined by about 77 percent from its peak.

Walsh, who has guided anglers on the lake for more than 35 years, said many still have "salmon syndrome."

"If they can't catch the big kings, the interest isn't there quite like it used to be," he said.

Another problem is competition from Lake Michigan, where the salmon fishery is stronger and coastal tourist cities are bigger, offering more options for vacationing families.

"Lake Huron is kind of the ugly sister while Michigan is Cinderella," Walsh said.

Ed Retherford, another veteran charter caption who operates out of Presque Isle near the lake's northwestern end, says there's reason for optimism. His customers are still landing chinook, though not as many as before, and walleye fishing is gaining popularity.

"I'm still pretty busy," Retherford said. "I had a boat breakdown last year and was thinking of giving it up. Now I'm going hot and heavy again."