The sale to JBS SA, the parent of JBS USA Holdings Inc., which owns Pilgrim's Pride, is expected to be completed by the end of the year. News of the $575 million sale comes after Tyson's announcement earlier this month of a $7.75 billion deal to buy Hillshire Brands Co. 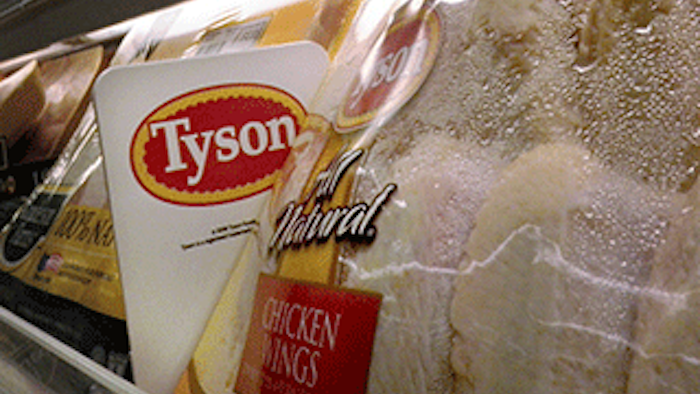 SPRINGDALE, Ark. (AP) — Tyson Foods plans to sell its poultry businesses in Mexico and Brazil for $575 million in cash to help pay debt from its recently announced acquisition of Hillshire Brands.

The Springdale, Arkansas, meat processor said Monday that it still plans to expand its international operations, especially in Asia, but the businesses it will sell didn't have the scale to gain leading positions in their markets. Tyson made the announcement the same day it reported fiscal third-quarter earnings that climbed more than 4 percent but missed analyst expectations.

Tyson Foods Inc. said it expects the sale of its Mexico and Brazil operations to JBS SA will be completed by the end of the year. JBS SA is the parent of JBS USA Holdings Inc., which owns Pilgrim's Pride. Tyson's Mexican business will be acquired through Pilgrim's Pride.

Tyson's Mexico and Brazil operations employ more than 10,000 people combined. Tyson said the new owners expect to maintain all operations and labor contracts in both countries.

Tyson, which employs about 115,000 people globally, said last week it would close three U.S. plants that have struggled financially. Those plants are located in Cherokee, Iowa; Buffalo, New York; and Santa Teresa, New Mexico. They employ a total of 950 workers.

The company said the action will enable it to move some of the operations and equipment at the plants to other, more cost-efficient Tyson plants.

Company shares slipped 53 cents, or 1.3 percent, to $39.01 in premarket trading Monday about an hour and a half before the market opening. The stock had increased $6.08, or 18 percent, to $39.54 since the beginning of the year through Friday's close, while the Standard & Poor's 500 index has increased 7 percent.

Video shows them physically overwhelming security guards.
May 9th, 2022
Follow Us
Most Recent