Photo of the Day: A Foodie Hotel

The Epicurean Hotel is a $35 million, 137-room hotel that revolves around food. There's an 80-seat restaurant, patisserie, culinary theater, wine store, rooftop bar and cooking classes in a theater that looks like it's a Food Network set. 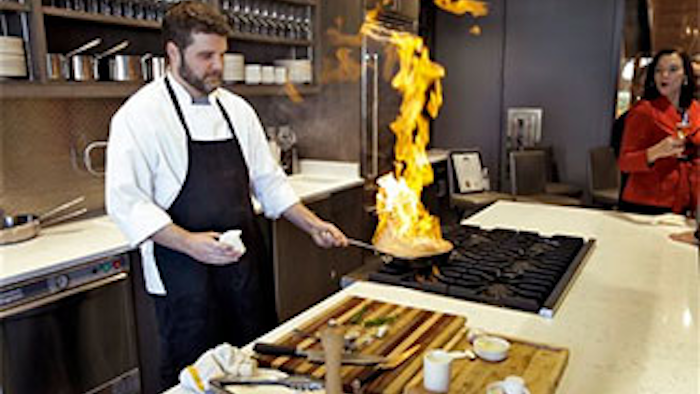 (AP) — This Dec. 17, 2013 photo shows Executive Chef Chad Johnson cooking a steak during a tour of the new Epicurean Hotel in Tampa, Fla.

TAMPA, Fla. (AP) — In the past, the Tampa Bay region hasn't been high on a foodie's travel bucket list.

Sure, there are some tasty Cuban sandwiches in Tampa and fresh grouper in restaurants along the Gulf of Mexico.

The Epicurean Hotel, a $35 million, 137-room hotel, opened Tuesday, Dec. 17. The entire concept revolves around food: There's an 80-seat restaurant, patisserie, culinary theater, wine store, rooftop bar and cooking classes in a theater that looks like it's a Food Network set. While a vacation centered around food is nothing new in Napa wine country, rustic Vermont or romantic Tuscany, it's a fresh idea in Florida.

Guests have personal pantries in their rooms stocked with gourmet goodies, including chocolate and sea salt caramels, prosciutto, goat cheese and bottles of wine — including a handout that explains which wines go best with each snack.

The decor is also food-themed. Paintings of fruit grace the walls, cookbooks line bookshelves in the lobby and pillows on the hotel beds depict utensils. An 8-foot-high knife and fork rest in a corner and in a hallway, two vertical, living herb gardens are a lush addition.

Even the hotel's employees, who have dubbed themselves "Epicureans," feel like they have a culinary responsibility.

"They are lovers of food and wine and will curate the experience for our guests," said Joe Collier, president of Mainsail Lodging and Development Group.

The Tampa-based Mainsail partnered with the owner of the city's best-known restaurant — Bern's Steak House — to develop the boutique Epicurean hotel. Bern's is across the street from The Epicurean, and Collier said that he expects guests to eat at the restaurant, drink at the hotel's bar, sleep at the hotel, then enjoy other food-related activities the following day.

Bern's, which was opened in Tampa in 1956 by Bern Laxer and is now owned by his son, David Laxer, boasts one of the largest wine lists of any restaurant in the world. TV chef Rachel Ray named it the best steak house in the U.S., and Wine Spectator Magazine has given it a "Grand Award" each year since 1981.

The restaurant's expertise in wine will be shared across the street in the hotel, where a wine and spirits store is nestled on the first floor. It's next to the culinary theater, which already has a calendar of events ranging from "The Universe of Krug Champagne" to "Tea and Chocolate Pairing."

"Education and culinary growth have always been a big part of my family," said Laxer.

Classes aren't only for hotel guests, and neither is the rooftop bar, with its views of downtown Tampa.

During Tuesday's opening party, the city's movers and shakers sipped champagne and cheered when The Epicurean's executive chef Chad Johnson sautéed a slab of steak on the culinary theater's Viking stovetop. (The hotel restaurant also has a second, massive Viking stove, which cost $175,000).

Meanwhile, throughout the hotel, workers busily placed flatscreen TVs in rooms, wheeled pallets of doors into the spa and unwrapped chaise lounges on a patio deck. Only about 35 rooms were open as of Tuesday, but Norwood Smith, Mainsail's vice president of sales and marketing, said more rooms are coming on line every day. The hotel is booked solid for New Year's Eve, he said.

The hotel is part of Marriott International's Autograph Collection, and has a ballroom and space for weddings or business meetings. Room prices range from $200-$300 a night.

The patisserie will be open by mid-January, the spa will do business by the beginning of February, and a lavish grand opening party with celebrity chef Norman Van Aiken is scheduled for Jan. 17-19.