Quinetum is a cordial from Hendrick's Gin. Don't feel bad if you've never heard of it. That's kind of the idea. Quinetum is sold exclusively to a few bars around the country. And Hendrick's isn't the only brand making a pitch to the cocktail cognoscenti. 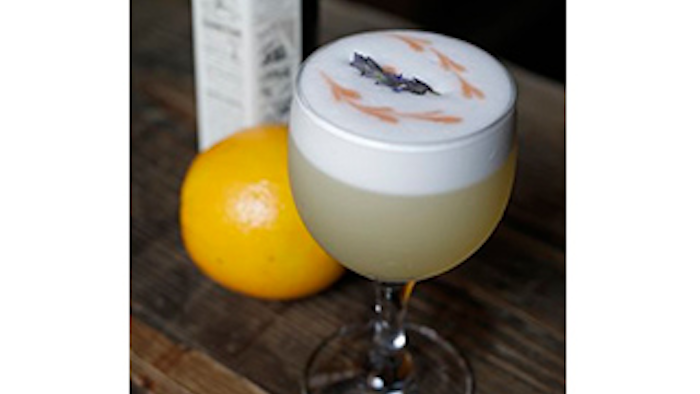 (AP) — In this photo taken Wednesday, Oct. 30, 2013, a drink called the Heironymous Sour, made with Quinetum, a new quinine cordial by Hendrick's Gin, is shown at the Rickhouse bar in San Francisco.

SAN FRANCISCO (AP) — There's something different about the gin and tonics they mix at Rickhouse bar on San Francisco's Kearny St. And it tastes a lot like... exclusivity.

Its real name is Quinetum, but its game is selling customers on the idea of seeking out bars that serve up cocktails with hard-to-find ingredients.

Quinetum is a cordial from Hendrick's Gin. Don't feel bad if you've never heard of it. That's kind of the idea. Quinetum is sold exclusively to a few bars around the country. And Hendrick's isn't the only brand making a pitch to the cocktail cognoscenti. Tanqueray Gin last year reintroduced its Malacca version marketed nearly exclusively to bars, and Absolut has its Absolut Craft, a collection designed exclusively for bartenders.

"Everybody likes to feel like the thing that's sitting in front of them that they just paid money for is special," says Justin Burrow, proprietor of Captain Foxheart's Bad News Bar & Spirit Lodge in Houston, which has Tanqueray's limited production Malacca gin in the bar.

"If you can tell them that they're drinking something that maybe only 20 percent of the drinking population is getting to try, that adds value in the eyes of the consumer," he says. "It makes them happy."

Malacca, based on an old recipe by company founder Charles Tanqueray, was first introduced in general release in the '90s but was dropped as the company focused on Tanqueray 10. But bartenders, including Burrow, began asking for a re-release as their supplies dwindled. "It made the best Tom Collins. It did things that the London Dry gins wouldn't do," says Burrow.

A batch of 100,000 bottles was made and though some of those bottles were allocated to stores, most was earmarked for bartenders.

Hendrick's Quinetum, meanwhile, is available at about two dozen bars around the country. And at Rickhouse, you need to know to ask for it. The cordial, released this year, was created by Hendrick's Gin Master Distiller Lesley Gracie, who was inspired by the work of Thomas Whiffen, a mathematician and chemist who promoted the use of quinine in the 19th century.

"The thought was to make something that is entirely complementary to Hendrick's Gin so that both of the liquids elevate each other into great cocktails," says Jim Ryan, Hendrick's brand ambassador.

Only 4,000 bottles were made in the first batch, with 2,400 going to the United States. The cordial, 4 percent alcohol by volume, contains cinchona succirubra bark (the source of natural quinine), orange blossom, wormwood and holy thistle, as well as lavender and orange distillates.

It's meant to be used as an ingredient, not drunk alone, and can be used to kick up a cocktail or, for a low-alcohol option, simply mixed with ice, soda and a garnish of lime.

Drinking a limited edition liquor means that you can't, in most cases, try this at home. But cocktail connoisseur Gary Regan, better known as "gazregan" and author of "The Joy of Mixology," is fine with that. "I like the idea of sipping something that I'll never be able to sip again. The limited edition part of this equation, for me I find that it's just romantic."