Picking a bourbon isn't the one-two-three choice it used to be. There's been a boom in brands, especially from small, premium producers, not to mention a flood of new styles. Will you go for a barrel-aged version? Honey flavored? How about a bourbon that's been aged at sea? 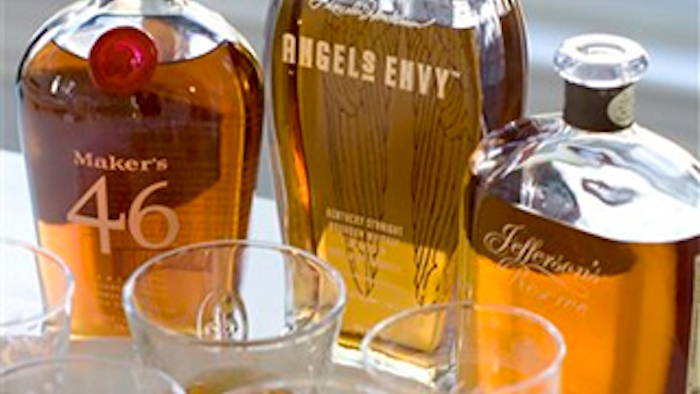 Picking a bourbon isn’t the one-two-three choice it used to be. There’s been a boom in brands, especially from small, premium producers, not to mention a flood of new styles. (AP Photo/Matthew Mead)

(AP) — Picking a bourbon isn't the one-two-three choice it used to be. There's been a boom in brands, especially from small, premium producers, not to mention a flood of new styles. Will you go for a barrel-aged version? Honey flavored? How about a bourbon that's been aged at sea?

No doubt about it, bourbon is branching out.

"The biggest thing right now is people are looking to stand out," says Andrew Abrahamson, general manager of the Seven Grand Downtown LA whiskey bar. "Before it was all about brand loyalty. Now, the consumer base is looking for something new, something different and something really cutting edge."

By law, bourbon, a type of whiskey, must be produced in the United States, made of a grain mix of at least 51 percent corn, distilled at less than 160 proof, made without additives save for water to reduce proof where necessary, and aged in new, charred white oak barrels. A minimum of two years aging is required to call the liquor "straight bourbon."

It's at the barrel level that a lot of the innovation is occurring.

Some of the extra touches producers are trying include selling single-barrel bourbons, made as the name suggests from a single barrel rather than being a blend of many. A popular way to enjoy this trend is to visit the distillery and pick out your own barrel. Abrahamson does this at Seven Grand, sending the staff out to pick their favorite barrels. The result is a slight price break and a chance to offer customers something unique.

Another, smaller, trend is the practice of finishing off standard bourbons in different types of barrels, like Angel's Envy, which is finished in ruby port wine casks. Meanwhile, Maker's Mark has Maker's 46, which is aged in barrels containing seared French oak staves. And Woodford Reserve has its Double Oaked bourbon, which is made as a standard bourbon, then put into a second barrel.

And, like vodka, bourbon has been getting in on the flavor craze with honey probably the most popular. But other flavors are available, too, such as the black cherry infused bourbon from Red Stag by Jim Beam.

The growing popularity of bourbon is not an overnight thing, points out Mike Veach, bourbon historian at the Filson Historical Society in Louisville, Ken., and author of "Kentucky Bourbon Whiskey: An American Heritage."

Several factors are at play, he said via email, including the growth of super-premium brands as well as the craft distilling movement, increased interest in bourbon tourism, and the role of social media in publicizing bourbons in ways that weren't possible 25 years ago.

In 2012, nearly 17 million 9-liter cases of bourbon were sold in the United States, generating more than $2.2 billion in revenue for distillers, according to the Distilled Spirits Council of the United States, with the strongest growth at the high end of the market.

"We grew 70 percent last year and we could be growing at that pace again this year if we didn't have out-of-stock situations, which is mainly due to our growth," he says.

Zoeller has been trying new things with his product, including putting barrels on a friend's ship and having them aged at sea for four years. The result, called Jefferson's Ocean and released in very small quantities, was a darker, more complex spirit as sugars caramelized in the barrel and the liquor sloshed around, in constant contact with the wood, he said. Now, he has ships going around the world including a batch that went in and out of the Panama Canal.

Bourbon has changed a lot in the past decade, and so has its audience, says Zoeller.

"There's so much information so readily available," he says. "They know how much goes into it. They know about the different char levels in the barrels, they know about aging it in different locations, they know what types and grains and percentages. It's amazing. It's fun."