Shareholders of Smithfield Foods Inc. on Tuesday approved a plan to sell the world's largest pork producer and processor to a Chinese company. 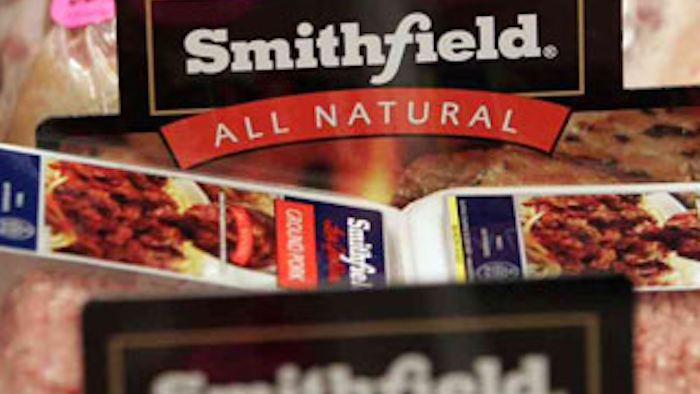 RICHMOND, Virginia (AP) — Shareholders of Smithfield Foods Inc. on Tuesday approved a plan to sell the world's largest pork producer and processor to a Chinese company.

The Smithfield, Virginia-based company said more than 96 percent of the votes cast during a special meeting in Richmond were in favor of Shuanghui International Holdings Ltd.'s $34 per share offer, or $4.72 billion in cash.

The deal, which is expected to close Thursday, will be the largest takeover of a U.S. company by a Chinese firm, valued at about $7.1 billion including debt. Its sale to Hong Kong-based Shuanghui comes at a time of serious food safety problems in China, some of which have involved Shuanghui, which owns food and logistics enterprises and is the largest shareholder of China's biggest meat processor.

"We will cease to be the company you saw in the past," Smithfield's CEO Larry Pope told shareholders. "This does not mean the company goes away, the company just enters into a new phase and a new era of its life."

Smithfield's shares rose to a penny to $33.99 in morning trading Tuesday, just short of the buyout offer.

Smithfield Foods, whose brands include Armour, Farmland and its namesake, was founded in 1936 and has grown to annual sales of $13 billion and has about 46,000 employees.

Pork producers such as Smithfield have been caught in a tug of war with consumers. The company needs to raise prices to offset rising commodity costs, namely the corn it uses for feed. But shoppers are still extremely sensitive to price changes in the current economy. By raising prices, Smithfield risks cutting into its sales should consumers cut back or buy cheaper meats, such as chicken. In 2009, Smithfield Foods posted its first annual loss since 1975, and lost money again in 2010, but has since rebounded.

Pope noted that the industry has been stagnant and the ability to grow has been tough. The deal, he said, gives the whole industry an opportunity to grow.

"The times for this company and the future, I think are very bright," Pope said. "It's the same old Smithfield, but better."

Smithfield has said that the buyout and China's growing demand for pork will be a boon for American agriculture and an opportunity to export to new markets. Smithfield's existing management team will remain in place and Shuanghui also will honor labor agreements with Smithfield workers. Shareholders also on Tuesday approved retention bonuses for the company's executives.

The acquisition highlights what could be growing interest in American food by Chinese consumers. Foreignfood, such as milk powder from New Zealand and vegetables from neighboring Asian countries, is prized by Chinese consumers because of the frequent domestic food safety scandals.

In one of the most notorious incidents, six babies died and 300,000 were sickened in 2008 from drinking infant formula and other dairy tainted with the industrial chemical melamine. And Shuanghui's reputation was battered in 2011 when state broadcaster CCTV revealed its pork contained clenbuterol — a banned chemical that makes pork leaner but can be harmful to humans.

Earlier this month, a U.S. committee that reviews mergers between American and overseas companies for national-security implications cleared the deal.

Some U.S. lawmakers have questioned the sale, even convening a Senate Agriculture Committee hearing in July to discuss the deal.

At the time, Committee Chairwoman Debbie Stabenow, a Michigan Democrat, said the sale raised many questions, including the impact on food safety and security. She also said the precedent-setting transaction prompts reservations about the government review process of foreign acquisitions of U.S. companies.

"Smithfield might be the first acquisition of a major food and agricultural company, but I doubt it will be the last," said Stabenow.