Large swaths of New York City's normally robust, trend-setting restaurant scene were hobbled this week by the storm, some by flooding, others by days without power — and thus refrigeration. Daniel Boulud's DBGB Kitchen & Bar, Tom Colicchio's Craft and Colicchio & Sons, Mario Batali's massive culinary landmark Eataly — all struggled to reopen days after the onset of the storm. 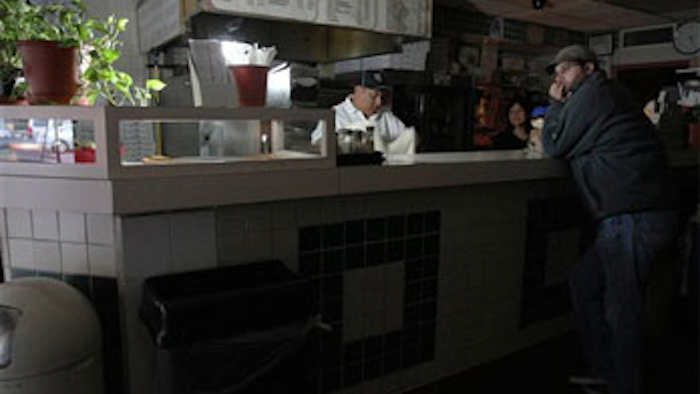 As the epic storm barreled down on Manhattan, Tinari's basement refrigerators were stacked high with beef spareribs, pork tenderloin, scallops, imported Gorgonzola. By Monday, relief that her 28-seat restaurant had been spared any flooding quickly turned to loss.

"When we got there, you could already smell the stuff in the refrigerators," she said during a telephone interview Friday.

The trick was turning loss into silver lining. With battery-powered lights strung up over her gas stove, Tinari worked with what little she could salvage or buy — bread, cheese, onions and potatoes, mostly — to restore some semblance of normalcy. By 1 p.m. Thursday, she was open for business. Albeit limited.

Grilled cheese sandwiches with apples and caramelized onions. Egg drop soup. Mulled ciders. Beer. And everything on the menu was $5.

"We just wanted to offer warm, homey, delicious stuff so people could come in and either eat or get drunk," she said with a laugh.

Large swaths of New York City's normally robust, trend-setting restaurant scene were hobbled this week by the storm, some by flooding, others by days without power — and thus refrigeration. Daniel Boulud's DBGB Kitchen & Bar, Tom Colicchio's Craft and Colicchio & Sons, Mario Batali's massive culinary landmark Eataly — all struggled to reopen days after the onset of the storm.

But even those spared the storm's direct wrath were challenged.

For much of the week, the city's public transit system was crippled, leaving even restaurants with electricity struggling to get workers to the job. David Burke, the man behind more than half a dozen restaurants including Fishtail and David Burke Kitchen, put some employees up at hotels in order to keep them on the job.

Burke, who estimates he lost at least $35,000 worth of food across his restaurants, said he and his staffs quickly created a triage system, shuttling food from restaurants closed or evacuated to those that still had power.

In the midst of it all, his chefs have been making soup and sandwiches for emergency responders. And this weekend, they will use a company truck to begin regular deliveries of sandwiches to residents and emergency workers on Staten Island, with plans to expand to other hard hit areas as needed.

At the critically acclaimed West Village hotspot Tertulia, Seamus Mullen has been balancing his own storm challenges — no flooding, but also no power — with trying to help others, even delivering ice to other restaurants.

"We've been open every night. I've been getting black market dry ice and getting bags of regular ice from anyone I can to keep our product from spoiling," Mullen said Friday. "We've been opening just by candlelight. And just two burners in the kitchen and a limited menu. I've got all my cooks wearing flashlights."

Mullen also has joined forces with a trio of other high-wattage chefs — George Mendes of Aldea, Marco Canora of Hearth and Andrew Carmellini of Locanda Verde — to launch the charity NYC FoodFlood to help feed those affected. The charity kicks off with a $300-a-plate fundraising dinner at Aldea on Wednesday. The money will be used to rent and staff a food truck to bring meals to the storm-struck outer boroughs.

Eddie Huang, the force behind the cultishly popular Baohaus on the Lower East Side, decided to quite literally wait out the storm. After feeding his staff and sending them home with as much food as they could take, he shut down to wait for power to be restored.

"It's been really tough, but I think it's a situation where doing less is more," he said, noting it would have taken hours for some of his staff to get to work had he tried to open. "We tried to go get ice, but by the time you get back you're tired as hell, your staff is exhausted, and why? So you can ice things until Friday and then do it again?"

At superstar pizza shop Motorino East Village — whose website announced "WE'RE OPEN! No electricity, no problem." — the pizza rolled on.

Thanks to the shop's wood-fired oven and plenty of candlelight, manager Charlie Marshall says they were able to reopen. The challenge was getting out the word. Marshall said most people assumed they were closed.

"So we got some sidewalk chalk and wrote 'We're open!' signs with arrows pointing to us" on sidewalks in a several block radius, said Marshall, adding that sales on Friday were donated to the Red Cross.

Still, some worry about the long term toll on the industry and its workers. Beyond the initial loss of product and damage to property, the ongoing lack of business doesn't lessen the need to pay overhead. And hourly employees don't get paid if they can't get to work, or if there is no work to get to.

Max Falkowitz, editor of the restaurant-centric website Serious Eats: New York, urged people to patronize restaurants as much as possible, saying in a post on Friday that "eating out right now is essentially an act of public service."

Still, Mullen was optimistic. "It's going to take a while for business to return to normal. But New York restaurants are really resilient. Some restaurants won't make it, but I'm confident most of us will."