Amazon kicked off its first day as the owner of Whole Foods by slashing prices, adding its logo on signs and setting up a stand of "farm fresh" Amazon Echo voice-assistant devices by store entrances. It's just the first taste of the moves the e-commerce giant will make at the organic grocer. 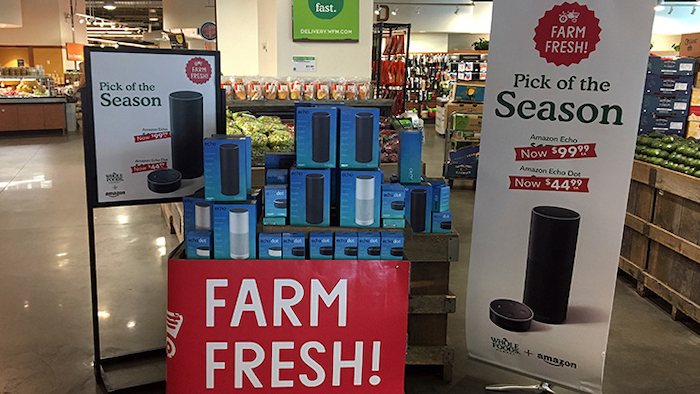 Amazon's Echo and Echo Dot appear on sale at a Whole Foods Market in New York, Monday, Aug. 28, 2017. Amazon has completed its $13.7 billion takeover of organic grocer Whole Foods, and the e-commerce giant is wasting no time putting its stamp on the company. Prices were lowered; Whole Foods brands will soon be on Amazon's site; and Amazon's Prime members could soon get discounts at Whole Foods. The deal could also spur changes in the wider grocery industry. (AP Photo/Joseph Pisani)

NEW YORK (AP) — A half-gallon of milk was 50 cents cheaper at a Whole Foods in New York. Ground beef was down by $2 a pound. And an organic avocado cost a buck less.

Amazon kicked off its first day as the owner of Whole Foods by slashing prices, adding its logo on signs and setting up a stand of "farm fresh" Amazon Echo voice-assistant devices by store entrances. It's just the first taste of the moves the e-commerce giant will make at the organic grocer after it completed the $13.7 billion deal on Monday.

More changes are coming: The company aims to make Amazon Prime the rewards program at Whole Foods and some Whole Foods products will show up on Amazon's site. The deal could also spur big changes in how people shop for groceries overall.

Here's what you need to know:

WHAT WILL CHANGE FOR SHOPPERS

Whole Foods had been just starting to test a loyalty program. But soon, shoppers at all stores will be able to tap Amazon's $99-a-year Prime program to get discounts at stores. And they will eventually be able to buy some Whole Foods products from Amazon.com. Lockers will be added in some locations so Amazon shoppers can pick up e-commerce orders or return items they don't want.

Amazon said those changes were just the beginning, but didn't give details on what more is coming. Those who watch the industry expect Amazon to push further into grocery deliveries, among other things. Whole Foods stores can serve as new distribution points for the AmazonFresh delivery service, allowing Amazon to expand where it offers home deliveries. That could include an expansion of ready-to-cook meal packages it's been testing in selected markets, including Seattle.

WHAT AMAZON WANTS FROM WHOLE FOODS

The deal gives Amazon more than 465 physical stores in the U.S., Canada and the U.K. Before the acquisition, Amazon had a small brick-and-mortar presence with less than a dozen bookstores, a prototype convenience store in Seattle and pickup locations in some cities near college campuses. The tie-up may also give the Seattle-based company valuable data on how people shop in stores, where the vast majority of retail sales still take place. Amazon is an expert in using data on past purchases and browsing to offer suggestions that might make people buy more, and could start applying that in stores as well as online.

Whole Foods, meanwhile, gets to exhale. Before the deal, the chain was under intense pressure from shareholders to improve its financial results and figure out how to stop customers from going to lower-priced supermarkets to buy natural foods. Whole Foods CEO John Mackey, who will stay in that role, said Amazon's history of innovation could transform Whole Foods from "the class dunce" to "valedictorian."

WHAT IT MEANS FOR THE COMPETITION

Shares of supermarkets took a hit when the deal was announced in June, and again when Amazon said last week that it planned to cut prices at Whole Foods. Rivals are scrambling to keep up: Kroger is testing online grocery delivery in several cities. And Walmart, the nation's largest grocer, is expanding its online grocery ordering and store-curb pickup to more stores. Last week, Walmart said it is joining forces with Google to let customers order goods with their voice on Google-run smartphones and other devices.

HOW THE DEAL WENT THROUGH

Despite Amazon's dominance online, Walmart remains the leading retailer overall, with more than three times Amazon's retail revenue. A union that represents food-industry workers had asked the Federal Trade Commission to examine the deal carefully, saying it could hurt competition, but the U.S. regulator didn't see it that way. The FTC said last week that it conducted an investigation to see if the acquisition lessened competition and "decided not to pursue" the matter. Typically, deals that bring two direct competitors together raise flags with regulators, but Amazon — despite its online dominance — doesn't currently have a big groceries business.