NEW DELHI (AP) — India is rejoicing over news that Prime Minister Narendra Modi has brokered deals with U.S. officials to bring New Delhi closer to its long-held dream of joining an elite group of nations allowed to control the global trade in nuclear materials, equipment and technology. ... 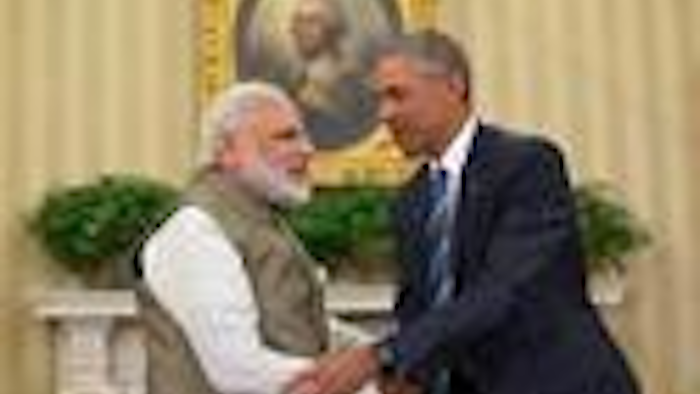 NEW DELHI (AP) — India is rejoicing over news that Prime Minister Narendra Modi has brokered deals with U.S. officials to bring New Delhi closer to its long-held dream of joining an elite group of nations allowed to control the global trade in nuclear materials, equipment and technology.

Newspapers have run daily front-page stories heralding progress on the nuclear front after President Barack Obama came out in support of Indian membership in the Nuclear Suppliers Group, which led other nations including Mexico and Switzerland to suggest they, too, were on board. Diplomats in Vienna suggested Thursday that India is closer than ever to joining the NSG, despite never fulfilling the requirement of signing a global treaty aimed at preventing the proliferation of nuclear weapons and weapons technology.

But would India's entry into the club make any difference? Some analysts say no, at least not from a technical standpoint.

India has already managed to secure access to nuclear fuel and technology to build power plants it says it needs to boost energy capacity and drive economic growth for the nation of 1.25 billion people.

Analysts say joining the NSG is chiefly a matter of pride and desire to be taken seriously by some of the world's most powerful nations. Since prompting international technology sanctions and limits on exports by conducting nuclear tests in 1998, India has been eager to gain legitimacy as a nuclear power.

"In practical terms, there is nothing extra that the NSG will give India other than a seat at the nuclear high table," said Rakesh Sood, a retired diplomat closely associated with India's nuclear negotiations over the past decade.

India already has deals with more than eight countries for supplies of uranium, and has signed agreements for reactors with France, Russia and the United States.

This week's reported nuclear breakthroughs were seen as a major point of progress for Modi, who has placed new urgency on India's nuclear ambitions with the aim of vastly expanding atomic power to account for about half of the country's total electricity supply by 2050.

Nuclear power is one way India, the third-biggest emitter of greenhouse gases, could cut its emissions and reduce air pollution from coal-fired power plants.

India scored a major victory in 2008, under Modi's predecessor, by securing a waiver from Washington allowing it access to nuclear technology and fuel despite its refusal to sign the Nuclear Non-Proliferation Treaty. But progress in deals to build new nuclear plants since then has stalled.

For months, Indian officials have crisscrossed the globe to gather support for New Delhi's entry into the NSG, the 48-member group that controls access to technology used in making atomic weapons.

Ironically, the group was set up in response to India's own clandestine nuclear test in 1974, which made New Delhi something of a pariah in the West. Joining the club requires the unanimous approval of all members.

Analysts said Modi is anxious to secure NSG membership while Obama is still in office, after years of receiving support from his administration.

"It's a matter of timing. A crescendo is building up; now is the time to clinch it," said Sheel Kant Sharma, a former Indian ambassador to Vienna, Austria. "Tactically and strategically it's time for India to be on the side of those who control technology."

This week, Obama hailed India's membership in the Missile Technology Control Regime, a group that restricts the export of missiles and their delivery systems.

Officials also reported progress in resolving an impasse over an Indian liability law passed in 2010 that makes builders of nuclear plants in India financially responsible for any accidents that might occur, with efforts to negotiate a multimillion-dollar insurance fund to cover any accidents.

The workaround solution seems to be ameliorating concerns; the Toshiba-backed U.S. energy giant Westinghouse Electric Co. said this week it is finalizing a contract to build six nuclear reactors in southern India.

India continues to refuse to sign the nonproliferation treaty, arguing that it is discriminatory since it defines nuclear weapon states as those that tested nuclear devices before January 1967 — which would disqualify India from ever becoming a member.

Nevertheless, Obama called on governments participating in the NSG to support India's application to the group when it meets later this month in Seoul, South Korea.

On Thursday, two diplomats at an NSG meeting in Vienna said resistance from New Zealand, Ireland, Turkey, South Africa and Austria had softened, though China remained opposed. The diplomats demanded anonymity in exchange for speaking to The Associated Press because they were not authorized to talk about the substance of the closed session.

India's admission to the nuclear club is further complicated because Pakistan, its archrival, also wants to join. On Thursday, the Dawn newspaper in Islamabad reported that the Pakistani government had formally asked the Obama administration and Congress for their support.

Indian analysts said China may be persuaded to ease its position if it is offered something in exchange, for example, being allowed to join the Missile Technology Control Regime. Its 2004 application for membership was denied on suspicion that some Chinese companies were secretly supplying missile technology to North Korea.

"It is possible China may now seek some kind of bargain, whereby it is given entry to the MTCR in return for letting India get into the NSG," Praveen Swami said in the Indian Express newspaper.