Myanmar Villagers Remain in Standoff Over Mine

Villagers refusing to leave their homes for the expansion of a Chinese-backed copper mine in northwestern Myanmar remained in a tense standoff with security forces for a second day Tuesday, with two reported hurt. The confrontation left one woman dead Monday when guards and police fired at the protesting villagers. 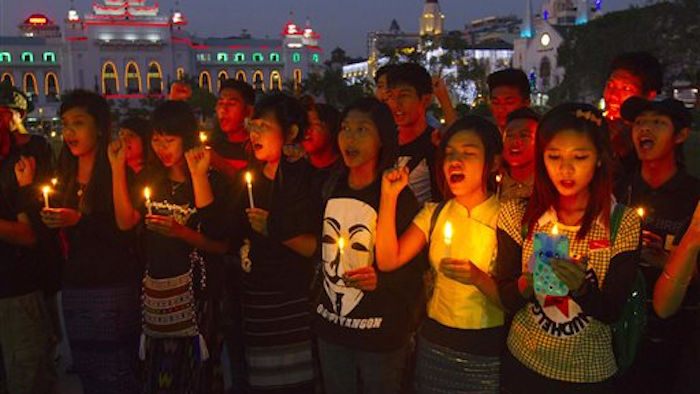 YANGON, Myanmar (AP) — Villagers refusing to leave their homes for the expansion of a Chinese-backed copper mine in northwestern Myanmar remained in a tense standoff with security forces for a second day Tuesday, with two reported hurt.

The confrontation, which left one woman dead Monday when guards and police fired at the protesting villagers, is the latest in a string of land disputes since a nominally civilian government was elected in 2011 and accelerated opening up the economy to foreign investors.

Han Win Aung, an activist, said about 1,000 police and security guards and more than 200 Chinese workers at the Letpadaung mining project have surrounded several villages where residents refused to leave.

He said two villagers suffered gunshot wounds Tuesday morning, though his account could not be independently confirmed. Neither police nor mining company officials were immediately available for comment.

The state-run Myanma Ahlin daily reported Tuesday that one villager was killed and 20 other people, including 11 policemen, had been injured in Monday's melee when police fired shotguns several times to disperse a crowd of villagers trying to stop an attempt to fence off land for the mining project. It said some villagers had fired slingshots.

A public relations officer from China's Wanbao Mining Copper Ltd., a partner in the mine, expressed sorrow for the death of the villager. Cao Desheng said that most villagers in the area had agreed to move out to make room for the mining project.

"We have made amazing progress in building trust with the community but we are so sorry that this incident has happened," Cao said.

Villagers say thousands of acres (hectares) of farmland have been seized to allow for the mine's expansion. Critics claim the mine causes environmental problems.

Work at the mine was temporarily halted and the mining contract renegotiated so that millions of dollars went toward community development projects and to pay compensation to villagers. Although production was resumed after the company paid compensation to some villagers, others refused to take the money and insisted that they would hold on to their land.

Khin San Hlaing, a lawmaker from the opposition National League for Democracy party, scolded the mining company for continuing to try to fence off the area Tuesday, and said it should stop all work and meet with villagers to resolve the problem.