Once Vilified, BP Now Getting Credit For Gulf Tourism Boom

Visitors bob in surf where oil once washed in, and some restaurants have 90-minute waits for dinner on the weekend. 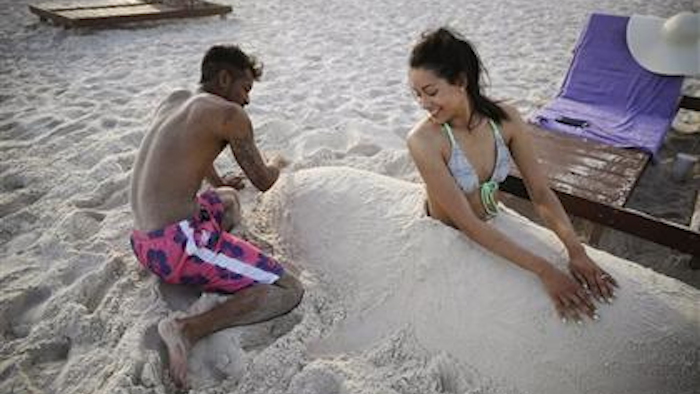 ORANGE BEACH, Ala. (AP) — Fallout from the oil spill that left Gulf Coast beaches smeared with gooey tar balls and scared away visitors in 2010 is being credited, oddly, with something

no one imagined back then: An increase in tourism in the region.

Five years after the BP disaster, the petroleum giant that was vilified during heated town hall meetings for killing a way of life is now being praised by some along the coast for spending more than $230 million to help lure visitors back to an area that some feared would die because of the spill.

Questions remain about the long-term environmental impacts of the BP disaster, with a report released just last week finding a definite link between the spill and a record die-off of the bottlenose dolphins that tourists love to spot along the northern Gulf Coast. Pockets of oil still blot the sea floor and spots along Louisiana's coast.

Meanwhile, many are still wrangling with BP over spill-related claims. Attorneys for businesses and individuals claiming damages from the spill announced a $211 million settlement last week with Transocean Ltd., owner of the failed Deepwater Horizon drilling rig.

Yet, at the same time, parking lots are full outside the same coastal hotels and condominium towers that struggled for business and slashed prices while crude was pouring into the gulf off Louisiana's coast in 2010.

Visitors bob in surf where oil once washed in, and some restaurants have 90-minute waits for dinner on the weekend. Tourist business has doubled in Alabama's largest beach towns since before the spill, officials say, and Pensacola Beach, Florida, is so clogged with visitors that traffic is a primary problem.

Many attribute the change in large part to the millions of dollars that BP spent on tourism grants and advertising that promoted the Gulf Coast nationwide to people who previously didn't even realize that Alabama and Mississippi had coastlines.

"I've traveled as recently as the spring to California and there were people there who were saying, 'Hey, I saw those commercials about Alabama," said coastal condominium developer Bill Brett. "I really think those commercials helped."

Brett is an owner of Brett/Robinson Real Estate, where he said business is up about 30 percent since the year before the spill. The company has developed 19 buildings with more than 3,200 condo units on the Alabama coast, including one that was finished with a $37 million settlement from BP after the spill.

The tourism surge isn't happening in a vacuum: Many U.S. attractions have seen big increases during the same period as the economy recovered following the 2008 financial crisis and Americans returned to the road.

The theme parks of Orlando, Florida, helped draw a record 62 million visitors to the city last year, and the U.S. Travel Association expects Americans to spend about 5 percent more this Memorial Day than last.

But back in 2010, there were questions and fears over whether the tourist economy of the northern Gulf Coast would ever recover from the spill. Residents feared that images of oil-soaked birds and blackened beaches would permanently change travel patterns and leave towns like Gulf Shores, Alabama, and Destin, Florida, as the forgotten coast.

Ted Scarritt, who offers tourist cruises in Orange Beach aboard his 53-foot catamaran "Wild Hearts," remembers crying and praying while the spill was happening. Scarritt, who also owns a beach service company, purchased the sailboat only months before the spill and had to keep it out of the oil-marred waters that summer.

Today all that seems like a bad, distant dream as he watches clear gulf waters slide past the hull during an afternoon of sailing off Alabama's coast.

Picking up shells in the surf at Pensacola Beach, Autumn Ventling of Nashville, Tennessee, didn't realize the spill ever occurred; she was just 18 at the time. Today, she said the white-sand beach and emerald-colored water appear beautiful, just like so many other beaches on the Gulf Coast.

Part of that is because of a massive cleanup program BP conducted on beaches after the spill. For months, big machines with metal sifters dug deep to remove remaining mats of tar from the sand, which was then spread back on the seashore.

While the cleanup work was going on, BP was also shelling out cash to revive tourism.

BP spokesman Jason Ryan said the company provided $179 million in tourism promotion grants to the gulf states of Alabama, Florida, Louisiana and Mississippi, and it aired commercials nationally touting the region as recently as early 2013. The company hasn't disclosed the cost of the spots, he said.

But under an agreement with plaintiff's attorney who sued over the spill, BP provided another $57 million for private groups and government to promote tourism and seafood on the Gulf Coast.

The rebound has been a relief to people like Jeanne Dailey, owner of Newman-Dailey Vacation Rentals in Destin.

During the long summer of 2010, Dailey spent many sleepless nights fearing oil would wash ashore and kill the tourism business. The Destin area never got the heavy patches of oil that polluted Alabama beaches, Mississippi coastal islands and the boot of Louisiana, but the perception that the entire coast was coated in oil prompted hundreds of vacationers to cancel travel plans, she said.

"Once I made peace with the fact that I might have to declare bankruptcy, things started to get better," she said.