Things to Know About The California Oil Spill

Cleanup crews continued to mop up oil-stained beaches along California's Central Coast two weeks after an onshore underground pipeline ruptured, leaking thousands of gallons of crude into the Pacific. 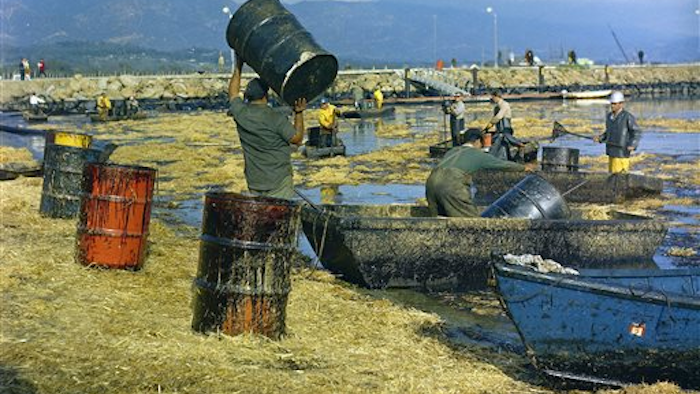 The May 19 spill occurred along the same stretch of Santa Barbara County coast as the devastating oil platform blowout in 1969 that galvanized the environmental movement.

While the impacts of the latest spill have been far less severe, the episode has angered conservationists and residents who lived through the earlier disaster.

Here are some things to know about the oil spill and the aftermath:

HOW DID THE SPILL HAPPEN?

A 24-inch pipeline that delivers crude oil from offshore drilling rigs to refineries inland ruptured and leaked for several hours before firefighters stopped the flow.

Up to 101,000 gallons of oil escaped including an estimated 21,000 gallons that washed into a storm drain and flowed out to sea. The spill quickly stretched 9 miles along the coast, forcing the closure of two state beaches and prompting a fishing ban.

Before the spill was discovered, an employee with Plains All American Pipeline noticed problems with the pipeline and remotely shut it down.

Last week, a section of the ruptured pipeline was excavated for testing to determine the cause of break â a process that could take months.

HOW IS THE CLEANUP GOING?

The task of cleaning up the mess has come under fire from environmentalists and lawmakers who questioned whether enough was done early on to contain the damage.

In a letter last week to the Pipeline and Hazardous Materials Safety Administration, U.S. Sens. Barbara Boxer and Dianne Feinstein of California labeled the response to the spill "insufficient." The senators questioned why it took Plains about 90 minutes after the spill to alert a clearinghouse that coordinates agencies in an emergency. They also questioned whether enough workers were mobilized to tackle the spill.

The Coast Guard defended the early response, saying it took some time to ramp up because crews had to parachute in from all over the state and country.

"We had people on the ground on day zero â people who were actually physically doing things to prevent the worsening of the spill," said Coast Guard Capt. Jennifer Williams.

About 1,150 workers currently are involved in the cleanup that includes removing tar and oil from sand and rocks and collecting oil-covered seaweed and kelp on the beach. About a dozen ships deployed to skim oil from the ocean have recovered nearly 12,000 gallons of oily water mixture.

WHAT'S THE IMPACT TO WILDLIFE?

Wildlife officers have recovered 168 birds and marine mammals coated in oil since the spill. About half were found dead including brown pelicans, sea lions and dolphins.

The toll on wildlife is relatively small compared to the 1969 spill that spewed more than 3 million gallons of oil into the ocean, killing thousands of seabirds and other animals.

ARE THE TAR BALLS SIGHTINGS RELATED TO THE SPILL?

Several days after the spill, tar balls and blobs of oil washed up on beaches in Los Angeles and Ventura counties. Beaches were temporarily closed as workers scooped up the oily goo.

Investigators are analyzing samples to determine if the oil is related to the Plains spill to the northwest or whether it's an excess of the natural seepage that can occur in the region.

WHO PAYS FOR THE CLEANUP?

The cost of the cleanup has not been released, but authorities have said the pipeline operator would foot the bill. The company also set up a claims process for people and businesses affected by the spill.