Two activists spent about six hours Friday suspended from the anchor chain of a Royal Dutch Shell support ship docked north of Seattle to protest the petroleum giant's plans to drill for oil in the Arctic Ocean. 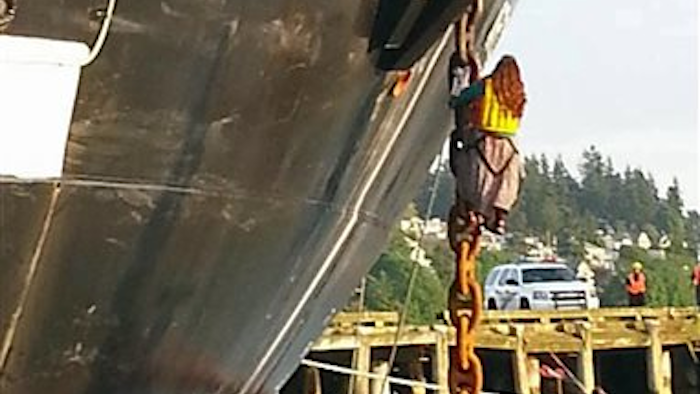 BELLINGHAM, Wash. (AP) — Two activists spent about six hours Friday suspended from the anchor chain of a Royal Dutch Shell support ship docked north of Seattle to protest the petroleum giant's plans to drill for oil in the Arctic Ocean.

The protesters sitting in cloth slings attached themselves around 3:30 a.m. to the anchor chain of the American Trader at the Bellingham harbor. A spokeswoman for the group said they were comfortable, in good spirits and excited to be there.

The Coast Guard reported they helped Bellingham Police remove the protesters around 9:30 a.m. Friday and then the police arrested them for trespassing.

This is the second Arctic drilling protest in the Bellingham harbor in about a month. The oil company's proposal also has drawn large protests in Seattle, where a drill rig is being prepared to explore for oil off Alaska this summer.

Sawyer Joy and Erika Osland, both students at Western Washington University, said they were trying to raise awareness about the hazards of Arctic drilling and climate change.

"People need to step up and put a stop to this madness," Osland said in a statement. "If not us, who? If not now, when?"

Two other protesters attached themselves to a different Shell support ship late last month for the better part of a weekend. They voluntarily left their perch with the help of the Coast Guard after days aboard.

The agency has initiated penalties against some protesters over violating the 100-yard safety zone around the Arctic Challenger.