The lawsuit accuses the companies of allowing drilling too close to the mostly underground salt mountain where Texas Brine had pumped water to get brine for refineries. 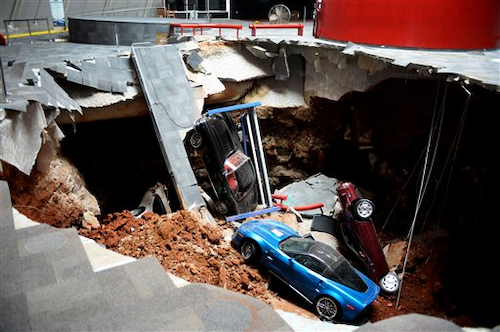 NEW ORLEANS (AP) — The company blamed for a 31-acre sinkhole that forced 350 rural Louisiana residents out of their homes has sued Occidental Petroleum Corp., claiming that negligent drilling and production contributed to the damage.

Texas Brine Co. LLC says Occidental and Oxy USA Inc. should have to cover more than $100 million in damages that Texas Brine has paid or will have to pay.

Occidental did not immediately respond to a request for comment on the lawsuit, filed Thursday in Assumption Parish.

The lawsuit accuses the companies of allowing drilling too close to the mostly underground salt mountain where Texas Brine had pumped water to get brine for refineries.

Texas Brine alleges that oil and gas production from a reservoir near its cavern reduced pressure and weakened the cavern wall.

Both Texas Brine and Occidental are based in Houston.

Louisiana Office of Conservation scientists have said that Texas Brine's years of brine mining hollowed out a cavern that got too close to the outer face of the Napoleonville salt dome. Eventually, they said, the weak spot broke and surrounding water and muck filled the cavern.

The sinkhole's formation also cracked open natural deposits of methane gas that posed an explosion risk to homes if the invisible and odorless gas built up inside or under the homes, the scientists said.

Spokesman Sonny Cranch says he was not able to get a total spent so far on mitigation.