A new kind of subatomic particle called the pentaquark has been detected for the first time, the European Organization for Nuclear Research said Tuesday. 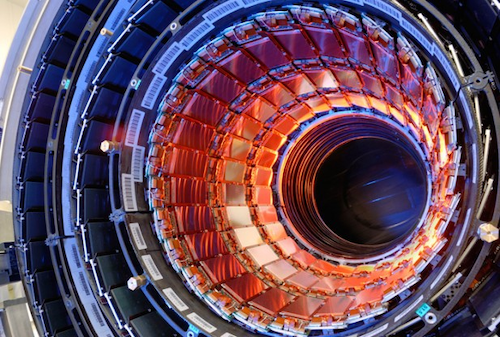 BERLIN (AP) — A new kind of subatomic particle called the pentaquark has been detected for the first time, the European Organization for Nuclear Research said Tuesday.

The lab, known by its French acronym CERN, said the findings were made by a team of scientists working on the LHCb experiment, one of the four at its Large Hadron Collider.

The existence of pentaquarks was first proposed in the 1960s by American physicists Murray Gell-Mann and Georg Zweig. Gell-Mann, who received the Nobel Prize in 1969, coined the term "quark" to describe the building blocks that make up hadrons — subatomic particles such as the proton and the neutron.

Until recently, only hadrons with two or three quarks had been found. In recent years, physicists have seen evidence of hadrons made up of four quarks, called tetraquarks.

Previous claims to the detection of pentaquarks, containing four quarks and an anti-quark, have been refuted. But experts said the new results from CERN, which have been submitted to the journal Physical Review Letters, appear credible.

"It is indeed compelling, in part because of the clarity of their experimental data, but also because I can't find a viable alternative explanation," said Eric Swanson, a theoretical physicist at the University of Pittsburgh.

Swanson, who wasn't involved with the LHCb experiment, said proof of the existence of pentaquarks would be a major boost for physics.

"Every particle we're aware of, except for a few oddballs, is made up of quark and anti-quark, or three quarks. That's what builds up the mass of the universe, what makes you and me and the Earth and the sun," he said. "This, if verified, should be the beginning of a whole new form of matter."

Guy Wilkinson, a spokesman for the LHCb experiment team, said studying pentaquarks may help scientists to better understand "how ordinary matter, the protons and neutrons from which we're all made, is constituted."

The discovery would be the second major find at the Large Hadron Collider, which is used by physicists from around the world. The collider was instrumental in the discovery of the Higgs boson, a subatomic particle that had long been theorized but never confirmed until 2013.

The collider is housed in a 27-kilometer (16.8-mile) tunnel beneath the Swiss-French border near Geneva. It was recently given a $150 million upgrade that allows atoms to be smashed together with even greater force, allowing it to recreate conditions similar to those during the earliest moments of the universe.

CERN likened previous attempts to prove the existence of pentaquarks to looking for silhouettes in the dark, "whereas LHCb conducted the search with the lights on, and from all angles."