A coalition of environmental groups is supporting Duke Energy's effort to dismiss part of long-running lawsuit over pollution leaking from the company's coal ash dumps. 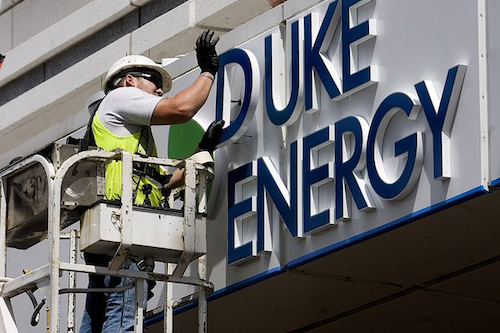 The Southern Environmental Law Center filed Wednesday in support of Duke's motion to a North Carolina judge pledging that the company will dig up and remove all ash from pits at half of its 14 coal-fired power plants in the state.

"For years now, our clients have pressed Duke Energy to clean up all its contaminated coal ash sites," said D.J. Gerken, senior staff attorney for the environmental legal group. "It is good news that Duke Energy has now publicly committed to do the right thing at half of its coal plant sites in North Carolina. We will keep working to make Duke Energy finish the job by cleaning up its remaining unlined coal ash sites in way that protects our communities and clean water."

Duke's remaining seven coal-fired plants in the state are not subject to any cleanup deal. North Carolina lawmakers approved new legislation last year requiring Duke to address pollution leaking from all of its coal ash dumps by 2029, but that potentially includes capping the dumps with plastic and leaving the ash in place.

A message left for Duke was not immediately returned Wednesday.

The seven plants that would be cleaned up under the proposed court order include: Asheville, Riverbend in Mount Holly, Sutton in Wilmington, Cape Fear in Moncure, H.F Lee in Goldsboro, Weatherspoon near Lumberton and Dan River in Eden.

The proposed court order also would address the source of contamination for communities near and downstream from the seven sites, Gerken said.

The complaints, filed last year under the federal Clean Water Act, accuse Duke of contaminating rivers and groundwater used as sources of drinking water by hundreds of thousands of people.

Coal ash contains numerous chemicals that are toxic to humans and wildlife, including arsenic, lead, chromium and thallium.

Duke's 33 unlined ash pits across the state have been under intense scrutiny since a February, 2014, spill at a power plant in Eden coated 70 miles of the Dan River in gray sludge.

But environmental groups said the new law didn't go far enough, and they pointed to what they describe as the state's long history of lax enforcement of clean water regulations that should have required Duke to clean up its mess years ago.

Prosecutors said that Duke's illegal pollution had been going on as far back as 2010.

The Charlotte-based company pleaded guilty in May to nine criminal violations of the federal Clean Water Act for pollution at its coal-fired plants in Eden, Moncure, Asheville, Goldsboro and Mount Holly.

As part of a negotiated settlement with federal prosecutors, Duke agreed to pay $68 million in fines and $34 million on environmental projects and land conservation that will benefit rivers and wetlands in North Carolina and Virginia.

In March, the state Department of Environment and Natural Resources fined Duke $25 million for groundwater contamination that has been seeping for years from the Sutton plant's unlined dumps.

The company is appealing the state fine, which it says is excessive.