The state Public Utilities Commission is considering whether to approve for the second time in just over five years construction of the South Dakota portion of the long-delayed Keystone XL oil pipeline. 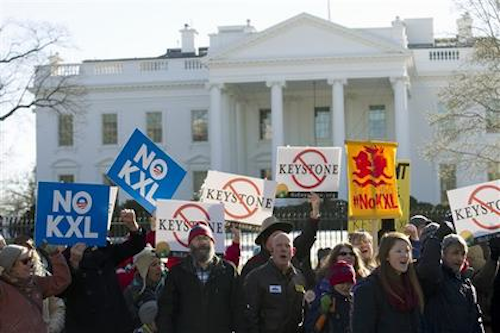 PIERRE, S.D. (AP) — The state Public Utilities Commission is considering whether to approve for the second time in just over five years construction of the South Dakota portion of the long-delayed Keystone XL oil pipeline.

The commission hearing process began Monday and is scheduled to stretch until Aug. 4. The state initially authorized TransCanada Corp.'s project in 2010, but permits must be revisited if construction doesn't start within four years. The commission is now considering the firm's guarantee that it can complete the project while meeting the conditions of the 2010 approval.

Commission Chairman Chris Nelson has said it's unlikely the panel will come to a final decision at the hearing.

The project has prompted opposition from Native American tribes, some landowners and environmental groups who are concerned the pipeline could contaminate water supplies and contribute to pollution.

Supporters argue that the pipeline will be a boon for the country and will create construction jobs and boost tax collections in South Dakota. Corey Goulet, president of Keystone Projects for TransCanada, said in a Monday statement that "Keystone XL was a good project for South Dakotans in 2010 and it is an even better project today."

William Taylor, an attorney for TransCanada, said that the project continues to meet the conditions on which the permit is based.

John Harter, a Tripp County landowner whose property is crossed by the pipeline, said the project endangers the public for monetary gain.

"TransCanada has no answer to how they will clean up a spill into our aquifer," Harter said. "The permitting for this route is ignorant, greed-filled and for this I hold you ... liable."

South Dakota is one of several fronts where TransCanada is stalled in getting approval for the pipeline, which would go from Canada through Montana and South Dakota to Nebraska, where it would connect with existing pipelines to carry more than 800,000 barrels of crude oil a day to refineries along the Gulf Coast. It could also transport some crude from the Bakken oil field.

The pipeline proposed in 2008 has not received the required approval from President Barack Obama and is also delayed by a Nebraska court case from landowners who oppose it.