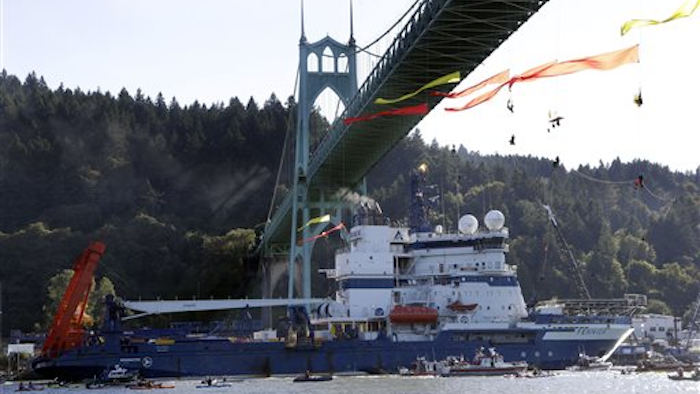 A total of seven protesters have now been fined for interfering with the safe operations of a vessel, Petty Officer 1st Class George Degener said.

They can either pay the mandatory minimum fine or pursue an appeal before a hearing officer.

The icebreaker Fennica was leaving Portland last month when 13 protesters suspended themselves from St. Johns Bridge over the Willamette River to try to block its departure to the Arctic. Activists in kayaks also blocked the ship.

Portland police and the U.S. Coast Guard eventually cleared a path for the ship.

Greenpeace spokeswoman Cassady Sharp said the organization has not been officially notified about the fines and was working with an attorney to confirm them.

"Greenpeace was totally prepared to face the legal consequences of the protest in Portland," Sharp said. "So we completely stand by our actions to stop Shell from drilling in the Arctic."

The Fennica has joined other vessels in the Shell flotilla as the company searches for oil in the Arctic.

Earlier this month, Shell applied to amend its federal exploratory drilling permit to allow drilling into oil-bearing rock. The company had been banned from such drilling until equipment was not on hand to handle a possible well blowout.

That equipment was on the Fennica, which was repaired in Portland after it sustained hull damage July 3 in the Aleutians Islands.

Arctic offshore drilling is strongly opposed by environmental groups that say the industrial activity will harm wildlife and delay a transition to renewable energy.