Down to just one full-time employee, Taylor Energy Company exists for only one reason: to fight an oil leak in the Gulf of Mexico that has gone largely unnoticed, despite creating miles-long slicks for more than a decade. 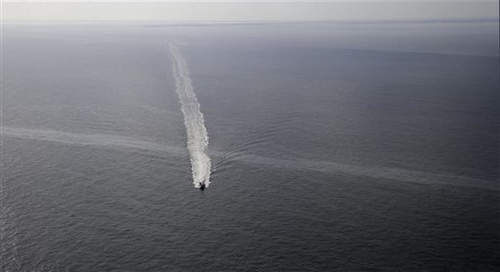 OVER THE GULF OF MEXICO (AP) — Down to just one full-time employee, Taylor Energy Company exists for only one reason: to fight an oil leak in the Gulf of Mexico that has gone largely unnoticed, despite

creating miles-long slicks for more than a decade.

The New Orleans-based company has downplayed the leak's environmental impact, likening it to scores of minor spills and natural seeps that the Gulf routinely absorbs.

But an Associated Press investigation has revealed evidence that the spill is far worse than what Taylor — or the government — has publicly reported. Presented with AP's findings, the Coast Guard provided a new leak estimate that is about 20 times greater than one recently touted by the company.

Outside experts say the spill could be even worse — possibly one of the largest ever in the Gulf, albeit still dwarfed by BP's massive 2010 gusher.

The roots of the leak lie in an underwater mudslide triggered by Hurricane Ivan's waves in September 2004. That toppled Taylor's platform and buried 28 wells under sediment about 10 miles off Louisiana's coast at a depth of roughly 475 feet. Without access to the buried wells, traditional "plug and abandon" efforts wouldn't work.

The Coast Guard said in 2008 the leak posed a "significant threat" to the environment, though there is no evidence oil from the site has reached shore. Ian MacDonald, a Florida State University biological oceanography professor and expert witness in a lawsuit against Taylor, said the sheen "presents a substantial threat to the environment" and is capable of harming birds, fish and other marine life. Even after spending tens of millions of dollars to contain and stop the leak, Taylor says nothing can be done to completely halt the chronic oil sheens.

Last year, the company presented federal regulators with a proposed "final resolution." While the details remain under wraps, it contends experts and government officials agree that the "best course of action ... is to not take any affirmative action" due to the possible environmental risks.

The government has allowed the company to shield other spill-related information from public scrutiny — all in the name of protecting trade secrets.

"The Taylor leak is just a great example of what I call a dirty little secret in plain sight," said SkyTruth President John Amos, a geologist whose environmental watchdog group has monitored the slicks by satellite.

Amos estimates that between 300,000 and 1.4 million gallons of oil has spilled from the site since 2004, with an annual average daily leak rate between 37 and 900 gallons. The government has given much smaller estimates, from an average of 22 gallons per day in 2008 down to an average of 12 gallons per day over roughly the next five years. In a February court filing, Taylor said experts concluded last year that the sheens contained an average volume of less than 4 gallons per day.

But the AP's review of more than 2,300 pollution reports since 2008 found they didn't match official accounts of a diminishing leak. In fact, the reports show a dramatic spike in sheen sizes and oil volumes since Sept. 1, 2014. That came just after federal regulators held a workshop to improve the accuracy of slick estimates reported by a Taylor contractor and started sending government observers on the monitoring flights.

When presented by AP with evidence of the spike, the Coast Guard attributed it to an improved method for estimating the slicks from the air — with the clear implication that far more oil had been spilling for years than had been reported.

After initially providing AP with an outdated, lower estimate, the Coast Guard then disclosed a new estimate — that approximately 16,000 gallons of oil have been spotted in slicks over the past seven months. That is roughly six times higher than its 2013 estimate, of about 4,500 gallons a year, and 20 times higher than the figure cited by Taylor in a Feb. 19 court filing.

A Taylor spokesman declined to comment on AP's findings.

Five years ago, it took 87 days for BP to cap its blown-out Gulf well and halt the worst offshore oil spill in the nation's history. The disaster exposed weaknesses in the drilling industry's safety culture and gaps in its spill response capabilities.

Taylor's leak — at a site once operated by BP — provided earlier evidence of how difficult it can be for the industry to prevent or stop a spill in an unforgiving environment. But the company has balked at sharing information that could help other offshore operators prepare for a similar incident, saying it's a valuable asset.

Whether it can profit from any industry innovations is debatable. The company sold all its offshore leases and oil and gas interests in 2008, four years after founder Patrick Taylor died.

"It's not normal to have a spill like this," said Ken Arnold, an industry consultant. "The whole thing surprises me. Normally, we fix things much more quickly than this."