Board Urged to Adopt Buffers Between Homes, Oil Drilling

Farmers and environmentalists urged Montana regulators to establish buffer zones around homes to protect them from oil and gas drilling. 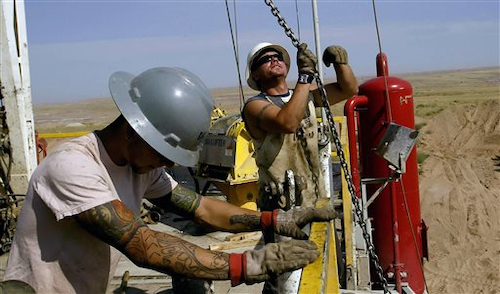 BILLINGS, Mont. (AP) — Farmers and environmentalists urged Montana regulators on Wednesday to establish buffer zones around homes to protect them from oil and gas drilling. But energy industry representatives say such a move isn't needed and would put large areas of the state off-limits to development.

North Dakota, Wyoming and Colorado require companies to keep drilling activities at least 500 feet from occupied dwellings. Montana has no such rule.

Linda Nelson, who chairs the state Board of Oil and Gas Conservation, said the panel will decide in August whether it wants to pursue the matter. That came after board members heard almost two hours of testimony during a special session on whether to require so-called setbacks for drilling.

Homestead-area farmer Dale Nelson said a 1,000-foot setback would protect his family from the potential dangers posed by oil wells around his property. Nelson said he spent 30 years as a firefighter and during that time dealt with at least three oil well fires caused by lightning.

"The toxic smoke that comes out with a fire, there's nothing you can do with it," Nelson said. "Do you want your grandkids around something like that?"

Other landowners raised concerns about noise and trash that comes from active well pads, and wastewater from drilling that could contaminate their drinking wells.

Denying oil companies access often is not an option: Many farms in Montana and elsewhere in the West occupy split estates, meaning the land and any underlying minerals have different owners. In such cases, mineral owners can lease their property to energy companies that then gain the right to drill for oil or gas.

Yet industry backers said oil companies frequently work directly with landowners to address their concerns about the proximity of wells. That can include negotiations over payments for access. Montana residents also have the option to contest any well that's proposed and request a hearing on it.

"These are problems that don't occur very often, and the public has the right to come and address the board," said Richard Beatty of Great Falls, a longtime oil and gas attorney. "I don't see the problem being one that would require a bunch more rules."

Mark Metz, with Houston-based Oasis Petroleum Inc., said buffer zones would have prevented the drilling of many wells that are now producing oil and gas in Montana.

A buffer rule proposed during the 2015 Legislature died in the Senate Natural Resources Committee. The bill from Sen. Mary McNally, a Billings Democrat, would have prohibited drilling within 1,000 feet of homes and water wells.