With a key safety vessel repaired and in northern waters, Royal Dutch Shell PLC has applied to amend its federal exploratory drilling permit to allow drilling into oil-bearing rock in the Arctic Ocean off Alaska's northwest coast. 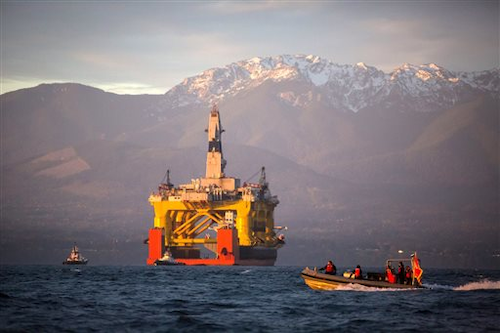 ANCHORAGE, Alaska (AP) — With a key safety vessel repaired and in northern waters, Royal Dutch Shell PLC has applied to amend its federal exploratory drilling permit to allow drilling into oil-bearing rock in the Arctic Ocean off Alaska's northwest coast.

Shell last month received permission to begin some drilling at two sites in the Chukchi Sea but was banned from digging into petroleum zones roughly 8,000 feet below the ocean floor.

The federal Bureau of Safety and Environmental Enforcement limited the permit then because equipment was not on hand to handle a possible well blowout.

The equipment is on the Fennica, a leased Finnish icebreaker that suffered hull damage July 3 as it left Dutch Harbor, a port in the Aleutians Islands.

They also say that drilling in U.S. Arctic waters, which the government estimates holds 26 billion barrels of recoverable oil, will delay a transition to renewable energy.

The Fennica's main job for Shell is to carry and maneuver a capping stack, a roughly 30-foot device that can be lowered over a wellhead to act like a spigot to stop a blowout. For Shell to drill into oil-bearing rock, the Bureau of Safety and Environmental Enforcement requires that the capping stack be pre-staged and available for use within 24 hours.

The Fennica was repaired at a Portland, Oregon, shipyard. On July 30, Greenpeace USA protesters with climbing gear hung from St. Johns Bridge over the Willamette River and prevented the vessel from leaving.

Activists in kayaks also blocked the ship. Portland police and the U.S. Coast Guard eventually cleared a path for the Fennica.

Shell on Thursday applied to drill into oil-bearing rock, said Shell spokesman Curtis Smith. The Fennica on Monday was north of the Bering Strait near Point Lay, Alaska.

The Fennica should arrive in the drilling area on Tuesday, Smith said.

Shell has two drill vessels at its Burger Prospect about 70 miles off Alaska's northwest coast. The Polar Pioneer, a semi-submersible drilling unit, leased from Transocean Ltd., has completed what's called a mud-line cellar — a 20-by-40-foot hole at the top of the well that will hold a blowout preventer.

The second drill rig, the Noble Discover, is moored 8 miles away over a second well site. It cannot drill simultaneously. Federal rules protecting walrus prohibit drilling at two sites within 15 miles of each other.

The Noble Discoverer, Smith said, is in position to begin drilling when the exploratory well beneath the Polar Pioneer is closed.

The permit requires Shell to end drilling by late September.