Schweitzer Elected Chairman of Stillwater Board

Former Montana Gov. Brian Schweitzer said Monday that he is "focused like a laser" on improving the Stillwater Mining Co. after being elected chairman of the board — but he also isn't ruling out a potential U.S. Senate run, saying he's good at "keeping a couple of balls in the air." 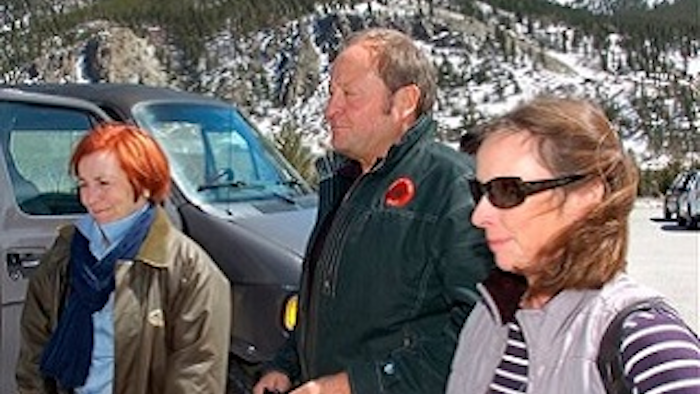 HELENA, Mont. (AP) — Former Montana Gov. Brian Schweitzer said Monday that he is "focused like a laser" on improving the Stillwater Mining Co. after being elected chairman of the board — but he also isn't ruling out a potential U.S. Senate run.

The Democrat told the Associated Press in an interview that he has always been good at "keeping a couple of balls in the air."

Schweitzer was among four new board members elected earlier this month after he led a group of shareholders unhappy with current management at Montana's largest publicly traded company. The company announced Monday that he will also chair the board — ousting former chairman, and CEO, Frank McAllister.

Schweitzer clashed with McAllister over the course of the takeover battle. McAllister will continue as President and CEO of the company during an interim period while the board seeks a candidate to succeed him. He said in a statement from the company that he enjoyed his 12 years as chairman.

Schweitzer said his job as chairman will be to represent shareholders. The former governor, who left office in January due to term limits, aggressively maneuvered during the takeover on a platform critical of the company's 2011 decision to pay $450 million for a vast reserve of copper in Argentina. He and a New York hedge fund campaigned against alleged mismanagement by McAllister, who is also on the board and was among four members re-elected.

Schweitzer said the focus will now be to improve efficiency and profitability at the company's palladium and platinum mines in Montana's Beartooth Mountains, the only such mines in the United States.

Schweitzer has become the undeclared Democratic front-runner in next year's contest for the Montana Senate seat since Max Baucus announced his retirement. There has been some speculation that Schweitzer — a rabble-rousing populist who often takes pragmatic stances on hot-button issues — could entertain a longshot bid in the 2016 Democratic presidential primary.

In the interview, Schweitzer also weighed in on national politics by mocking the Department of Justice's secret seizure of two months of reporters' phone records by jokingly calling the AP a "terrorist organization," and earnestly lauding an idea to give student loans at the same low interest rates the government gives big banks.

"I am able to keep more than one ball in the air. When I was governor I was pretty good at also running my ranches," Schweitzer said. "If I decided to run for something, depending on what I run for, I wouldn't be sworn into until January 2015 or even later if I run for something else.

"I am not going to put my life on hold until then."

Schweitzer said political decisions will be made later as he focuses on the mining business in the short term.

"Certainly over the next month or more I will be focused like a laser and learning everything I can about corporate governance at the Stillwater mine, working with management, working to increase production on a daily and weekly basis, increasing efficiencies," Schweitzer said.

The company's stock price rose slightly on the news Monday.

Securities filings with federal regulators show Schweitzer has bought 33,000 shares of Stillwater common stock, worth about $425,000 based on its Monday price on the New York Stock Exchange. He started buying the stock soon after leaving office in January.

Stillwater has a market value of $1.5 billion and employs more than 1,600 workers at its two mines in the Beartooth Mountains and a smelter and metals recycling plant in Columbus.

McAllister was bringing in about $5 million a year over the last years in the dual role of chairman and CEO. Schweitzer said it will be up to the board's compensation committee to recommend how much to pay whoever fills those two positions now that they have been separated.

It's uncertain if that will change under the company's new leadership.