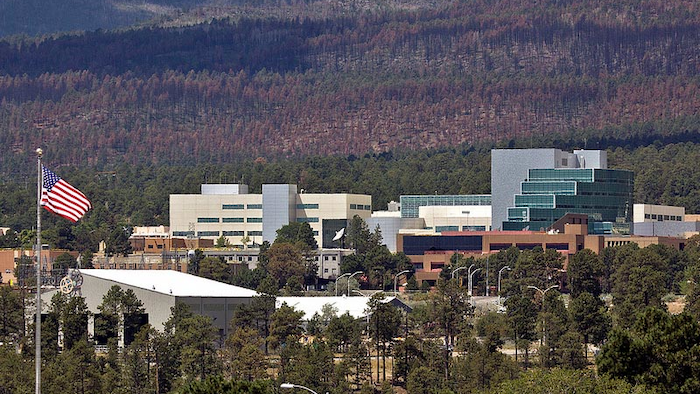 The Department of Energy and the operator of the Waste Isolation Pilot Plant near Carlsbad in southeastern New Mexico say they have signed an agreement with Waste Control Specialists to truck the waste to its site in Andrews County.

The agreement will help Los Alamos meet a June deadline for getting the last of thousands of barrels of plutonium-contaminated clothing, tools, rags and other debris off its northern New Mexico campus before wildfire season hits its peak.

The waste, which is shipped and stored in huge sealed canisters, would come back to New Mexico for final disposal once the Waste Isolation Pilot Plant reopens.

"We are pleased that WCS is in a position to provide temporary storage for this waste while the WIPP is shutdown," said Waste Control Specialists President Rod Baltzer. "This will allow the Los Alamos National Laboratory to meet its goal of having this material removed by this summer so it can no longer be threatened by wildfires. WCS has never had a wildfire because all surrounding areas are covered with asphalt and caliche roadways. In addition, the waste will be in storage facilities that have sprinkler system, and in the event of an emergency, WCS has its own fire truck on site."

But not everyone applauded the plan. Watchdog Greg Mello of the Los Alamos Study Group says that shipping the waste twice increases the chance of an accident because it has to be loaded and unloaded twice. And he notes that "there is essentially no danger of wildfire, the surrounding vegetation having been burned."

The West Texas site has in the past taken some less toxic waste from Los Alamos, but the Waste Isolation Pilot Plant is the nation's only permanent repository for low-level radioactive waste from nuclear weapons facilities.

Waste Control Specialists is licensed to take radioactive materials such as uranium, plutonium and thorium from commercial power plants, academic institutions and medical schools, as well as some DOE waste. It is also the burial ground for dirt from a Hudson River Superfund site that's tainted with PCBs, or polychlorinated biphenyls.

Chuck McDonald, a spokesman for the plant, said federal officials are working with regulators at the Texas Commission on Environmental Quality to make sure that storing the Los Alamos waste is allowable under its permits.

The state of New Mexico pressured Los Alamos to get the waste off its campus in the northern New Mexico mountains following a massive 2011 wildfire that lapped at the edges of lab property. The waste from decades of bomb building has been stored outside on a mesa. Following the Waste Isolation Pilot Plant shutdown, the state and Sen. Tom Udall, D-N.M., emphasized that the deadline was non-negotiable.

"Removing waste from the mesa in Los Alamos before fire season is critical to ensure safety in the greater Los Alamos community," Udall said in a statement Thursday. "I'm pleased we have a temporary solution that will ensure there will not be any significant disruption in cleanup efforts."

Los Alamos spokesman Matt Nerzig said the lab's target date to resume shipments is April 1. He said Los Alamos anticipates about 140 more shipments to clear the remaining 20 percent of the waste over the next three months.

The plant has been closed ever since, and officials are working on plans to get underground to figure out what caused the leak and the extent of contamination.

A team that investigated the truck fire last week issued a report that cited a series of shortcomings in safety training, emergency response and oversight. It is unclear, however, if the fire and leak are related.

And because no one has yet been inside the half-mile deep mine since the leak, there are no estimates on how long the plant might be shuttered for cleanup.

Richard Dolgener, the county judge for Andrews County, said the DOE has had the West Texas plant "on the drawing board" as a contingency to the nuclear waste dump for about 10 years.

"I guess they're going to execute it," he said

Cyrus Reed, spokesman for the Lone Star Chapter of the Sierra Club, questioned whether temporary means one year or 100 years.

Waste Control Specialists, he said, is "becoming a catch-all site for anyone's problem."