Fukushima Study: Think About The Unthinkable

A U.S. science advisory report says a key lesson from Japan's Fukushima nuclear accident is that the nation's nuclear industry needs to focus more on the highly unlikely but super-serious worst case scenarios. 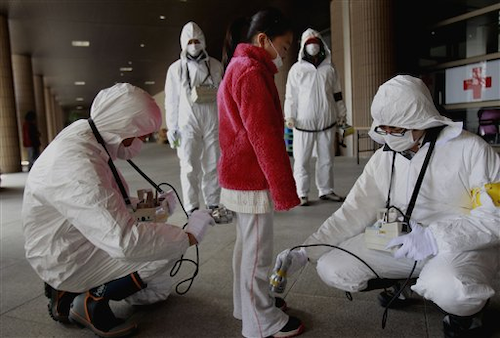 WASHINGTON – A new congressionally mandated report from the National Academy of Sciences concludes that the overarching lesson learned from the 2011 Fukushima Daiichi nuclear accident is that nuclear plant licensees and their regulators must actively seek out and act on new information about hazards with the potential to affect the safety of nuclear plants.  The committee that wrote the report examined the causes of the Japan accident and identified findings and recommendations for improving nuclear plant safety and offsite emergency responses to nuclear plant accidents in the U.S.

The accident at the Fukushima Daiichi plant was initiated by the Great East Japan Earthquake and tsunami on March 11, 2011.  The earthquake knocked out offsite AC power to the plant, and the tsunami inundated portions of the plant site.  Flooding of critical equipment resulted in the extended loss of onsite power with the consequent loss of reactor monitoring, control, and cooling functions in multiple units.  Three reactors -- Units 1, 2, and 3 -- sustained severe core damage, and three reactor buildings -- Units 1, 3, and 4 -- were damaged by hydrogen explosions.  Offsite releases of radioactive materials contaminated land in Fukushima and several neighboring prefectures, prompting widespread evacuations, distress among the population, large economic losses, and the eventual shutdown of all nuclear power plants in Japan.

Personnel at the Fukushima Daiichi plant responded to the accident with courage and resilience, and their actions likely reduced its severity and the magnitude of offsite radioactive material releases, the committee said.  However, several factors relating to the management, design, and operation of the plant prevented plant personnel from achieving greater success and contributed to the overall severity of the accident.

Nuclear plant operators and regulators in the U.S. and other countries are taking useful actions to upgrade nuclear plant systems, operating procedures, and operator training in response to the Fukushima Daiichi accident.  As the U.S. nuclear industry and its regulator, the U.S. Nuclear Regulatory Commission (USNRC), implement these actions, the report recommends particular attention to improving the availability, reliability, redundancy, and diversity of specific nuclear plant systems:

To further improve the resilience of U.S. nuclear plants, the report also recommends:

Until now, U.S. safety regulations have been based on ensuring plants are designed to withstand certain specified failures or abnormal events, or “design-basis-events”-- such as equipment failures, loss of power, and inability to cool the reactor core -- that could impair critical safety functions.  However, four decades of analysis and experience have demonstrated that reactor core-damage risks are dominated by "beyond-design-basis events,” the report says.  The Fukushima Daiichi, Three Mile Island, and Chernobyl accidents were all initiated by beyond-design-basis events.  The committee found that current approaches for regulating nuclear plant safety, which have been based traditionally on deterministic concepts such as the design-basis accident, are clearly inadequate for preventing core-melt accidents and mitigating their consequences.  A more complete application of modern risk-assessment principles in licensing and regulation could help address this inadequacy and enhance the overall safety of all nuclear plants, present and future.

The Fukushima Daiichi accident raised the question of whether offsite emergency preparedness in the U.S. would be challenged if a similar-scale event -- involving several concurrent disasters -- occurred here.  The committee lacked time and resources to perform an in-depth examination of U.S. preparedness for severe nuclear accidents.  The report recommends that the nuclear industry and organizations with emergency management responsibilities assess their preparedness for severe nuclear accidents associated with offsite regional-scale disasters.  Emergency response plans, including plans for communicating with affected populations, should be revised or supplemented to ensure that there are scalable and effective strategies, well-trained personnel, and adequate resources for responding to long-duration accident/disaster scenarios.  In addition, industry and emergency management organizations should assess the balance of protective actions -- such as evacuation, sheltering-in-place, and potassium iodide distribution -- for affected offsite populations and revise the guidelines as appropriate.  Particular attention should be given to protective actions for children, those who are ill, and the elderly and their caregivers; long-term social, psychological, and economic impacts of sheltering-in-place, evacuation, and/or relocation; and decision making for resettlement of evacuated populations in areas that were contaminated by radioactive material.