Worried about getting a fair shake from investigators, Duke Energy is asking a judge to shield its records from North Carolina regulators and environmental groups while a federal criminal probe is ongoing. 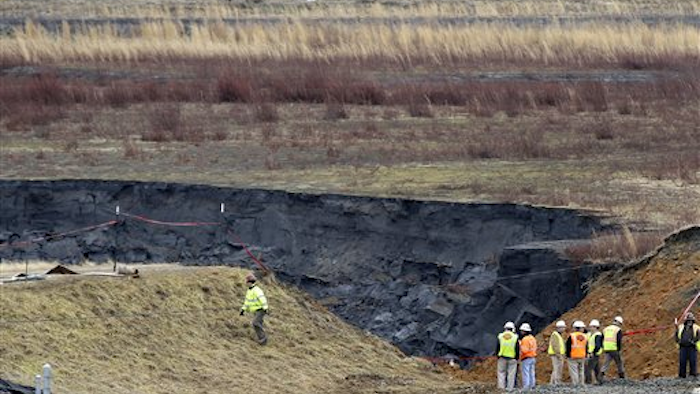 CHARLOTTE, N.C. (AP) — Worried about getting a fair shake from investigators, Duke Energy is asking a judge to shield its records from North Carolina regulators and environmental groups while a federal criminal probe is ongoing.

In a court motion, a defense lawyer for Duke argued that turning over records demanded as part of state lawsuits over the company's coal ash dumps could hurt the investigation's integrity, especially if the documents were to become public.

Federal prosecutors have issued at least 23 subpoenas as part of a widening criminal probe triggered by the Feb. 2 spill at Duke's plant in Eden, which coated 70 miles of the Dan River in toxic sludge. Duke has received two of the subpoenas, which order the company to provide reams of documents to a grand jury that has convened in Raleigh.

Federal investigators are looking at whether the company received preferential treatment from the state environmental agency. Duke has nearly three dozen other ash pits spread out at 14 coal-fired power plants across the state.

"Duke Energy strongly denies that it has in any way knowingly violated any law or committed any crime," says the motion, filed last week. "The government of the United States has the right to investigate the matters involved in these cases and Duke Energy intends to cooperate fully in that investigation so that it may receive a fair and unbiased assessment of its actions. This cannot occur if the proceedings of the grand jury and material provided to it are made a part of discovery in these cases."

The state court cases at issue deal with environmental violations at Duke plants near Charlotte and Asheville.

Working on the behalf of a coalition of citizens groups, the Southern Environmental Law Center tried to use the U.S. Clean Water Act to sue Duke last year in federal court over groundwater pollution leeching from its coal ash dumps.

The state Department of Environment and Natural Resources instead used its authority to issue violations and take the case to state court, quickly negotiating a settlement that would have fined Duke $99,111 with no requirement that the $50 billion company clean up its pollution. The citizens groups protested, calling it a "sweetheart deal" intended to protect Duke from possibly harsher federal penalties.

The agency asked a judge to dismiss that agreement last week, saying it now intends to move forward in court. The citizens groups have intervened in the case, meaning they will have access to documents Duke would provide.

In its motion, Duke said it wants to keep the records under wraps to "preserve the integrity" of the federal grand jury investigation and said the documents could be "publicized and disseminated through the media." If that happened, the company's lawyers said "the ability of Duke Energy to receive a fair and unbiased investigation into its action would be irrevocably compromised."

"They are using the fact that they are caught up in a federal criminal investigation related to their coal ash storage as an excuse to try to postpone the enforcement of the law against them," he said. "It's exactly backward from how you think the law would operate."

In the last month, state regulators have issued nine environmental violations against Duke because of the spilland issues at other plants. The latest was Friday for a crack in a dam at a coal ash dump in Moncure, where regulators say Duke illegally pumped 61 million gallons of contaminated water into the Cape Fear River. Coal ash is known to contain numerous chemicals that are highly toxic to people and aquatic life, including arsenic, lead and mercury.

The state ordered Duke to take steps to ensure the earthen dam's stability. Duke has said it finished emergency repairs Monday to the dam that holds back millions of tons of coal ash.

Also Friday, state environmental officials said they had detected high levels of the poisonous element thallium leaking from a coal ash dump at Duke's Cliffside Steam Station in the western part of the state.

Though the specific reading was not disclosed, the state said its testing showed thallium at a level exceeding that considered safe for surface waters leeching from Duke's dump into the Broad River. A sample collected farther downstream from the plant also detected thallium, though at a level within safety standards, according to the agency.