The Intergovernmental Panel on Climate Change, or IPCC, will meet next week in Berlin to chart ways in which the world can curb the greenhouse gas emissions that scientists say are overheating the planet. 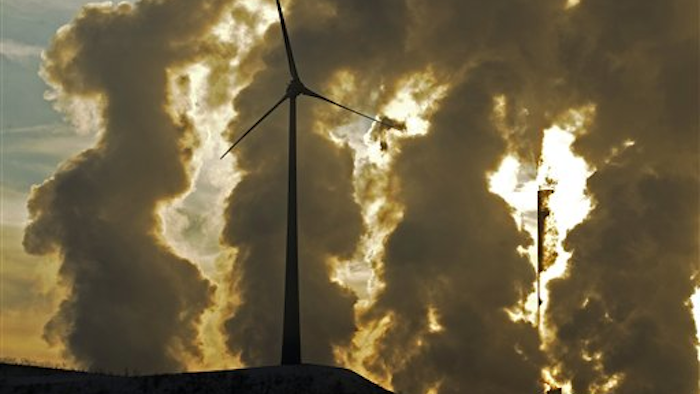 BERLIN (AP) — After concluding that global warming almost certainly is man-made and poses a grave threat to humanity, the UN-sponsored expert panel on climate change is moving on to the next phase: what to do about it.

The Intergovernmental Panel on Climate Change, or IPCC, will meet next week in Berlin to chart ways in which the world can curb the greenhouse gas emissions that scientists say are overheating the planet.

It is also trying to give estimates on what it would cost.

In the third report of a landmark climate assessment, the IPCC is expected to say that to keep warming in check, the world needs a major shift in investments from fossil fuels — the principal source of man-made carbon emissions — to renewable energy.

"Underlying this report is a lot of technical analysis of the different solutions, for example wind energy, solar, better energy efficiency and what is the cost of that," said Jake Schmidt, international climate policy director at the National Resources Defense Council, a Washington-based environmental group. "And there will also be some discussions of how deep global cuts are needed to put us onto these different climate trajectories."

A leaked draft of the report sent to governments in December suggests that in order to keep global temperature increases below 2 degrees Celsius (3.6 F) by the end of the century — the stated goal of international climate talks — emissions need to fall by 40-70 percent by 2050.

Investments in fossil fuels such as oil and coal would have to drop by $30 billion a year, while spending on renewables would have to go up by $147 billion annually, according to the draft.

That message is likely to face opposition from the fossil fuel industry and countries that depend on it.

Earlier this week, Exxon Mobile said the world's climate policies are "highly unlikely" to stop it from selling fossil fuels far into the future.

That contrasted with a message from U.N. climate chief Christiana Figueres, who told oil and gas industry officials in London on Thursday that three-quarters of the fossil fuel reserves still in the ground needs to stay there for the world to achieve the 2-degree target.

"We must look past the next quarter, past the end of the decade, into the second half of the century by which time the global economy must be carbon neutral," Figueres said.

The alternative plan to mitigate climate change would involve coming up with new ways to scrub carbon out of the atmosphere or prevent too much sunlight from being trapped in the atmosphere by greenhouse gases.

Known as geoengineering, ideas floated from time to time include dropping tons of iron into the ocean to make carbon-munching algae bloom or putting an umbrella in space to shield us from the sun.

Many scientists and campaigners believe such ideas are unlikely to work.

"My own scientific point of view is that it's too dangerous," said Bill Hare, lead author of the IPCC's 2007 report on mitigation. "It's got to be assessed though. You can't just ignore it."

Opponents say possible disastrous side effects from geoengineering could include a change in the monsoon pattern or a widening of the ozone hole that could threaten the lives of millions.

Observers will be watching for how much attention the IPCC gives to the issue when they wrangle over the wording of the final report next week in Berlin. The draft mentions it only briefly.

The two previous reports in the IPCC's first comprehensive assessment of climate since 2007 said it's 95-percent certain that climate change is man-made and highlighted the damage it is projected to inflict on economies, crops and human health.

The latest report also focuses on the costs associated with keeping warming below 2 degrees C. The draft projects consumption losses of 1-4 percent by 2030. That number is highly uncertain, though, and may be changed or deleted altogether in Berlin.

Another controversial part of the report is the one dealing with who should pay for efforts to curb climate change — an issue that's at the heart of U.N. negotiations on a new global climate agreement, set to be adopted by 2015. Poor and middle-income countries say they need more help from rich countries to switch to low-carbon energy sources.

The IPCC, which is a scientific body, tries to steer clear of politics, but notes that mitigation could involve financial transfers "in the order of hundreds of billions of dollars per year before mid-century."

By most measures, the West, which underwent industrialization earlier, has historically pumped more carbon into the atmosphere than newly emerging economies such as China, which has the world's highest carbon emissions.

"The main bone of contention will be how the cost is factored and how it's shared across the world," said Schmidt, of the National Resources Defense Council. "We're making decisions now that are building out our potential carbon infrastructure for decades. You can turn some of that off but there's a cost and implication for society in the future."