Supreme Court opinions are rarely susceptible to the kind of fact-checking that reporters usually employ on politics. But Justice Antonin Scalia's hearty dissent in an environmental case this week contained such a glaring error of fact — misreporting an earlier case in which Scalia himself wrote the majority opinion — that the justice changed the opinion. 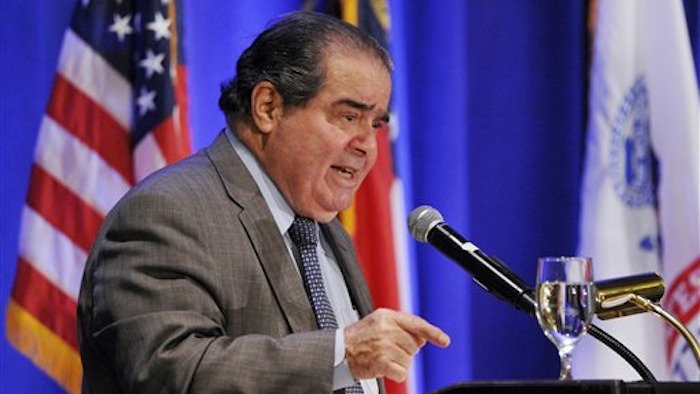 WASHINGTON (AP) — Supreme Court opinions are rarely susceptible to the kind of fact-checking that reporters usually employ on politics. But Justice Antonin Scalia's hearty dissent in an environmental case this week contained such a glaring error of fact — misreporting an earlier case in which Scalia himself wrote the majority opinion — that the justice changed the opinion. The court quietly posted the corrected version on its website without notice.

With the flourish that is typical of his prose, Scalia launched a lengthy attack on the Environmental Protection Agency and his colleagues on the court who ruled that the EPA has the authority to put in place a regulation aimed at reducing air pollution from power plants that the wind carries into other states. Scalia took the unusual step of reading a summary of his dissent in court Tuesday.

The mistake in Scalia's opinion concerned one section of about a page and a half in which he contended that the EPA was again asking for the authority to weigh costs against benefits in determining how large a reduction in emissions it mandates. "Plus ça Change: EPA's Continuing Quest for Cost-Benefit Authority," read the section heading. "Plus ça change" is the start of a French phrase that means "the more things change, the more they stay the same."

Scalia went on to say the case "is not the first time EPA has sought to convert the Clean Air Act into a mandate for cost-effective regulation." He cited as authority the high court's 2001 decision in Whitman v. American Trucking Associations, in which the court said that such an analysis was not allowed under a section of the landmark anti-pollution law. The author was Scalia.

The problem is that it was the trucking group, not the EPA, that wanted the agency to use a cost-benefit analysis.

Among those who first pointed out the problem were law professors Jonathan Adler of Case Western Reserve University and Dan Farber of the University of California at Berkeley.

Adler called the mistake merely "noticeable." Farber called it "a cringe-worthy blunder," ''hugely embarrassing" and doubly so because Scalia wrote the opinion he mistakenly cited for support.

By Wednesday morning, when The Associated Press called up the opinion online, the offending passage had been revised, as well as drained of its color. In place of the French title was the heading, "Our Precedent." The paragraphs that follow now faithfully recite the facts of the earlier case.

In lower federal courts, corrections often are formally noted, but not at the Supreme Court.

One reason the change may have been made without calling attention to it is that each Supreme Court opinion contains a notice that it is subject to revision before publication in the compilation of court decisions known as the United States Reports. The note asks readers to notify a court official "of any typographical or other formal errors" so that corrections may be made.