Testing EPA Power On The Chesapeake

A case before the 3rd U.S. Circuit Court of Appeals in Philadelphia asks whether the Environmental Protection Agency went too far in negotiating a 2010 agreement that sets pollution limits on the nation's largest estuary. 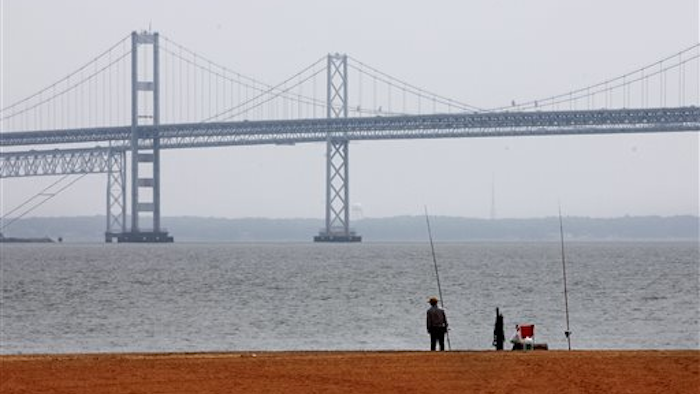 WASHINGTON (AP) — Maryland is joining three other jurisdictions in supporting the Obama administration's plan to clean up the Chesapeake Bay watershed, seeking to counter an election-year legal challenge by farmers and 21 attorneys general that could shape future U.S. environmental policy.

The case before the 3rd U.S. Circuit Court of Appeals in Philadelphia asks whether the Environmental Protection Agency went too far in negotiating a 2010 agreement that sets pollution limits on the nation's largest estuary.

The last of the legal briefs in the case were submitted late Monday. Maryland Attorney General Douglas Gansler argues that the cleanup is making progress and shouldn't be derailed by outside states with no interest in the Chesapeake Bay and its watershed. Signing onto his brief are Delaware and the District of Columbia; Virginia earlier had submitted a separate brief in support. That means four of the seven bay jurisdictions who consented to the EPA cleanup in 2010 are now defending the plan in court.

"This lawsuit attacks our efforts to restore the health of the Chesapeake Bay and strengthen its crucial economic value," Gansler said. "Maryland must preserve its partnership with an effective EPA to safeguard our environment and sustain the thousands of jobs supported by the bay."

Among the other states which agreed to the Chesapeake plan, West Virginia is now opposing the cleanup, joining 20 other states who filed briefs against the EPA plan. Pennsylvania and New York are staying silent in the litigation.

"We've developed our plan in consultation with other states and the EPA, and we will continue to work with local governments, the agriculture community and other stakeholders to successfully implement our plan," said Eric Shirk, spokesman for the Pennsylvania Department of Environmental Protection.

It's the latest sign of political division over EPA's authority under the federal Clean Water Act, coming in a midterm election year. Earlier this month, a group of GOP senators urged the Obama administration to reconsider EPA plans to regulate many of the nation's streams and wetlands.

Oral arguments are expected this summer, with a ruling afterward.

At issue is a federal-led effort to restore the 64,000-square-mile Chesapeake watershed by 2025. In 2009, President Barack Obama issued an executive order for a bay restoration after decades of state inaction, prompting the EPA to seek agreements with six states and the District of Columbia that set standards to reduce nitrogen, phosphorus and sediment that drain from rivers into the bay.

Farm runoff such as animal waste and fertilizer had created "dead zones" in the bay where nothing lives. It has taken a toll on marine life such as the bay's signature blue crab, according to the EPA.

The multistate agreement was challenged in 2011 by the American Farm Bureau Federation, which pointed to economic consequences for industry groups and the potential for the EPA to improperly seek new restrictions. Citing excessive power, the Farm Bureau also argued that the EPA lacked authority to establish pollution limits for states upstream of the Chesapeake Bay watershed — Pennsylvania, New York and West Virginia.

Last September, U.S. District Court Judge Sylvia Rambo in Harrisburg, Pa., ruled in favor of the EPA, finding that the Chesapeake plan was not a violation of the Clean Water Act because the states had voluntarily agreed to it.

Farmers and 21 attorneys general are now appealing that ruling. They say ratification of the Chesapeake plan will lead to similar EPA efforts to reduce pollution from Midwest farms into the Mississippi River Basin, which spans 31 states from Canada to the Gulf Coast. The EPA has said it has no current plans to establish new pollution limits in the Mississippi region.

Cary Coglianese, a law professor at the University of Pennsylvania, says the appeals court ruling could go a long way in shaping environmental policy. "A win will keep intact the EPA's policy approach, while a loss would not only have an effect on the Chesapeake but similar policies in other parts of the U.S."