China and the United States took small steps toward their shared goal of fighting climate change, but the world's No. 1 and No. 2 carbon emitters remain significantly apart over a wider global plan to cut emissions. 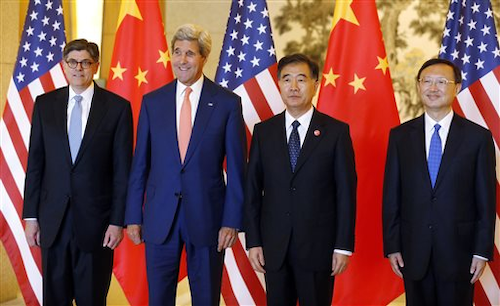 BEIJING (AP) — China and the United States took small steps toward their shared goal of fighting climate change on Wednesday, but the world's No. 1 and No. 2 carbon emitters remain significantly apart over a wider global plan to cut emissions.

China's chief climate official Xie Zhenhua said China should not be subject to the same rules for greenhouse gas emissions as the United States and other rich countries, signaling that Beijing will oppose any attempt to impose them at next year's world climate conference.

The U.S. special envoy Todd Stern said Washington favors every country deciding what it is capable of doing, instead of being categorized either as a developed country or a developing country in deciding how much a country should contribute to reduce climate change.

Asked how receptive the Chinese were to this idea, Stern said: "It's one of those conversations that just goes on and on, doesn't stop."

For years, the United States and China have been at odds over how much each country should contribute to reducing climate change. China insists as a developing country it shouldn't be held to the same stringent emissions caps as the rich world. The U.S. says that means failing to sufficiently address the problem given that China has significantly surpassed the U.S. as the world's biggest emitter of carbon dioxide, the heat-trapping gas that is a byproduct of burning coal, oil and gas.

Climate change activists complain that both countries have failed to take adequate steps to curb emissions. President Barack Obama recently announced a plan to cut by 30 percent greenhouse gas emissions from existing power plants, but set a deadline of 2030, by which time researchers say the amount of carbon dioxide in the atmosphere will already have caused drastic changes to the planet.

Xie and Stern made their remarks as Chinese and American officials — led by U.S. Secretary of State John Kerry and Treasury Secretary Jacob Lew — are meeting in Beijing for annual strategic and economic talks that aim to forge a more cooperative relationship between the world's two largest economies.

The difference on the global plan aside, the two countries announced Wednesday eight joint projects aimed at capturing and storing carbon, and setting up more efficient energy grids.

They also agreed to stronger fuel efficiency standards for cars and trucks and to study gas use in industrial boilers.