Rescue workers searched the smoldering ruins of a fertilizer plant Thursday for survivors of a monstrous explosion that leveled homes and businesses in every direction across the Texas prairie. As many as 15 people were feared dead and more than 160 others injured. 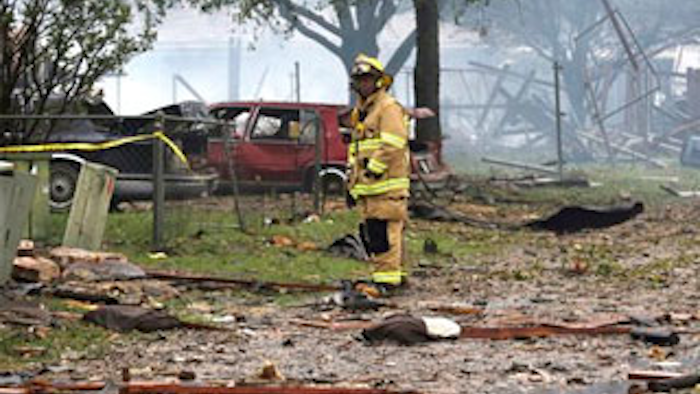 WEST, Texas (AP) — Rescue workers searched the smoldering ruins of a fertilizer plant Thursday for survivors of a monstrous explosion that leveled homes and businesses in every direction across the Texas prairie. As many as 15 people were feared dead and more than 160 others injured.

Daybreak revealed a breathtaking band of destruction extending from the West Fertilizer Co. in this small farming community about 20 miles north of Waco. The thunderous blast shook the ground with the strength of a small earthquake and could be heard dozens of miles away.

Searchers "have not gotten to the point of no return where they don't think that there's anybody still alive," Waco police Sgt. William Patrick Swanton said. He did not know how many people had been rescued.

There was no indication the blast, which sent up a mushroom-shaped plume of smoke and left behind a yawning crater, was anything other than an industrial accident, he said.

The explosion rained burning embers and debris down on terrified residents. It leveled a four-block area around the plant, badly damaging or destroying up to 75 houses, a 50-unit apartment complex, a middle school and a nursing home.

Morning revealed a landscape wrapped in acrid smoke and strewn with the shattered remains of buildings, furniture and personal belongings. The force of the explosion sheared away the entire front of the apartment complex, leaving behind twisted beams, shattered windows and great heaps of broken wood. Cars were battered as if a tornado had spun through town.

Firm information was difficult to come by in the hours after the blast, and entry into the town was slow-going as the roads were jammed with emergency vehicles. Authorities themselves had trouble entering the heart of the blast zone.

"It's still too hot to get in there," said Franceska Perot, a spokeswoman for the Bureau of Alcohol, Tobacco and Firearms, said Thursday morning.

Among those believed to be dead were three to five volunteer firefighters. The many injuries included broken bones, cut and bruises, respiratory problems and minor burns. Five people were reported in intensive care.

In the hours after the blast, residents wandered the dark, windy streets searching for shelter. Among them was Julie Zahirniako, who said she and her son, Anthony, had been at a school playground near the plant when the explosion hit.

The explosion threw her son four feet in the air, breaking his ribs. She said she saw people running from the nursing home, and the roof of the school lifted into the sky.

William Burch and his wife, a retired Air Force nurse, entered the damaged nursing home before first-responders arrived. They searched separate wings and found residents in wheelchairs trapped in their rooms. The halls were dark, and the ceilings had collapsed. Water filled the hallways. Electrical wires hung eerily from the ceilings.

"They had Sheetrock that was on top of them. You had to remove that," Burch said. It was "completely chaotic."

Authorities said the plant made materials similar to those used in the 1995 Oklahoma City bombing.

The fertilizer used in that attack, ammonium nitrate, makes big explosions, be they accidental or intentional said Neil Donahue, professor of chemistry at Carnegie Mellon University. It also was used in the first bombing attempt at the World Trade Center in 1993.

Ammonium nitrate is stable, but if its components are heated up sufficiently, they break apart in a runaway explosive chemical reaction, said Neil Donahue, professor of chemistry at Carnegie Mellon University.

"The hotter it is, the faster the reaction will happen," Donahue said. "That really happens almost instantaneously, and that's what gives the tremendous force of the explosion."

West Mayor Tommy Muska told reporters that his city of about 2,800 people needs "your prayers."

At the Hillcrest Baptist Medical Hospital in Waco, elderly people were wheeled in on stretchers. A man in a wheelchair with his T-shirt covered in blood winced as teams tended to his wounds.

About a half-hour before the blast, the town's volunteer firefighters had responded to a call at the plant, Swanton said. They immediately realized the potential for disaster because of the plant's chemical stockpile and began evacuating the surrounding area.

The main fire was under control late Wednesday, but residents were urged to remain indoors because of the threat of new explosions or leaks of ammonia from the plant.

Firefighters used flashlights to search the still-burning skeleton of an apartment complex that was all but destroyed. A flood-lit football field initially was used as a staging area, then other triage centers sprung up around the blast site.

First-responders evacuated 133 patients from the nursing home, some in wheelchairs. Many were dazed and panicked and did not know what happened.

Erick Perez was playing basketball at a nearby school when the fire started. He and his friends thought nothing of it at first, but about a half-hour later, the smoke changed color. The blast threw him, his nephew and others to the ground and showered the area with hot embers, shrapnel and debris.

There were no immediate details on the number of people who work at the plant, which was cited by the Texas Commission on Environmental Quality in 2006 for failing to obtain or to qualify for a permit. The agency acted after receiving a complaint in June of that year of a strong ammonia smell.

The Chemical Safety Board has not investigated a fertilizer plant explosion before, but Managing Director Daniel Horowitz said "fertilizers have been involved in some of the most severe accidents of the past century."

He noted the 2001 explosion at a chemical and fertilizer plant that killed 31 people and injured more than 2,000 in Toulouse, France. The blast occurred in a hangar containing 300 tons of ammonium nitrate and came 10 days after the Sept. 11, 2001, terrorist attacks in the U.S., raising fears at the time it was linked. A 2006 report blamed the blast on negligence.

Horowitz also mentioned the 1947 Texas City disaster, when a fire in a cargo ship holding more than 2,000 tons of ammonium nitrate caught fire and exploded, killing more than 500 people.