Obama: Washington Has 'Taken Eye Off' the Economy

Seeking to build momentum for looming fiscal fights, President Barack Obama on Wednesday cast himself as the champion for middle-class Americans struggling to make ends meet. He chided Washington for having "taken its eye off the ball." 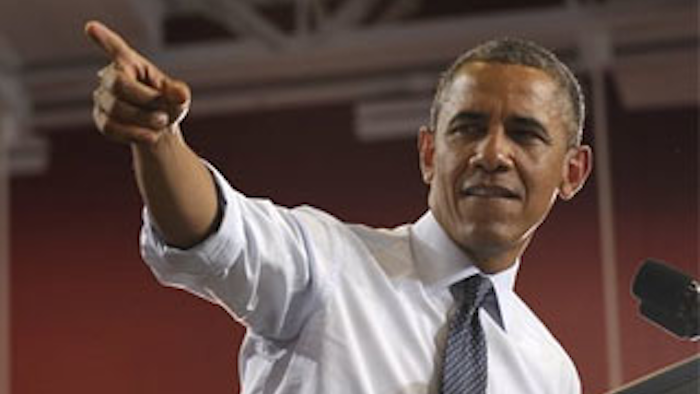 GALESBURG, Ill. (AP) — Seeking to build momentum for looming fiscal fights, President Barack Obama on Wednesday cast himself as the champion for middle-class Americans struggling to make ends meet. He chided Washington for having "taken its eye off the ball" and declared that the economy would be the "highest priority" of his second term.

Obama, in an hour-long address that was at times deeply partisan, also accused Republican lawmakers of succumbing to "an endless parade of distractions and political posturing and phony scandals." He said gridlock had only gotten worse since his re-election.

Obama, as he often does when criticizing Washington, glossed over his own status as the inhabitant of the city's most powerful office.

GOP leaders quickly panned the president's remarks as a series of repackaged ideas and empty promises.

"It's a hollow shell, it's an Easter egg with no candy in it," House Speaker John Boehner, R-Ohio, said.

Indeed, the president's remarks were void of new policy proposals or fresh solutions for breaking Washington stalemates. And there were no new approaches presented for resolving potential showdowns with Republicans this fall over raising the nation's borrowing limit and curtailing across-the-board federal budget cuts known as "the sequester."

For the president's advisers, a central goal of the speech was simply to refocus Obama's agenda squarely on the economy ahead of the fall deadlines. The first six months of his second term largely have been consumed by priorities like gun control and immigration, as well as an array of foreign policy crises and domestic controversies, including the National Security Agency's domestic spying programs and IRS scrutiny of political groups.

While official Washington's attention was elsewhere, the economy was slowly but steadily improving. The housing market is recovering, the stock market is soaring, and unemployment, while still high at 7.6 percent, is falling.

But the White House fears that standoffs this fall over the debt ceiling and the sequester could upend that progress. The president has declared that he will not negotiate over the debt ceiling and expects Republicans to lift the borrowing limit without concessions. He's also pushing to end the federal budget cuts before they extend into the next fiscal year, which begins Oct. 1.

The president panned the sequester as a "meat cleaver" that has "cost jobs, hurt our military and gutted investments in American education."

Obama will seek to keep up his renewed economic focus in the coming weeks with a series of speeches on manufacturing, education, housing, retirement security and health care. Advisers say some of those speeches will contain more specific policy proposals, both for congressional legislation and executive action.

The president said he welcomed ideas from lawmakers of both parties, but wouldn't stand for reflexive opposition to his own initiatives.

"I'm laying out my ideas to give the middle class a better shot," he said. "Now it's time for you to lay out your ideas."

For Obama, the day trip to Knox College marked a return to the site of his first major economic address. He spoke at the school's graduation ceremony in 2005 as a newly elected U.S. senator.

His remarks back then were strikingly similar to the themes he outlined Wednesday in Illinois and later in Missouri, including the government's role in ensuring all Americans have opportunities to get ahead and the need for the U.S. to be better prepared to compete internationally. Barring action now, Obama said, "We will be waving the white flag while other countries forge ahead in the global economy."

The economy in the surrounding Galesburg community reflects much of the underlying economic concerns facing many Americans. A Maytag plant in the town shut its doors in 2004, leaving hundreds of people unemployed. Today, the factory still sits vacant. Galesburg's unemployment rate is just under 8 percent, and nearly a quarter of its population lives in poverty.

"Those old days aren't coming back," Obama conceded. He said the proposals he will outline in speeches later this summer will be aimed at adapting the U.S. economy to an increasingly competitive and interconnected world.

On education, the president promised "an aggressive strategy to shake up the system, tackle rising costs, and improve value for middle-class students and their families."

During the second stop Wednesday, Obama highlighted a program at the University of Central Missouri in Warrensburg that gives students education and skills at a faster pace while lowering the costs. Students earn a bachelor's degree in two years.

"You are a laboratory for this innovation. ... I want the entire country to notice it," Obama said. "I've asked my team to shake the trees all across the country for some of the best ideas out there for keeping college costs down."

The president also said he would use the speeches he'll give in the coming weeks to renew his calls for increasing the minimum wage and giving all 4-year-olds access to pre-school programs. The first of those speeches will come Tuesday, when Obama visits an Amazon distribution center in Chattanooga, Tenn.

Obama also pledged to take steps to encourage home ownership, make it easier for people to save for retirement and to continue to put in place the elements of his health care law in the face of efforts by Republicans in Congress to repeal, delay or eliminate funding for its various parts.