Cause of Fla. Gas Plant Explosion Being Investigated

Equipment malfunction and human error are among the possible causes of a series of explosions that spawned a 20-by-20 foot fireball at a central Florida propane plant and left eight injured, authorities said. Tavares Fire Chief Richard Keith said sabotage was not suspected. 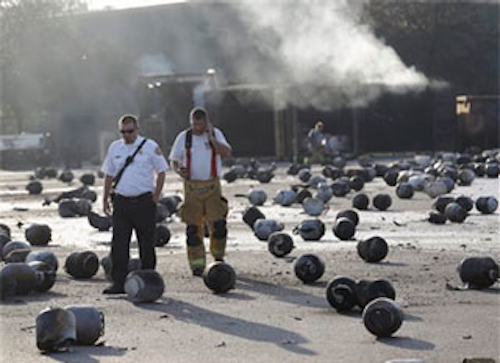 TAVARES, Fla. (AP) — Equipment malfunction and human error are among the possible causes of a series of explosions that spawned a 20-by-20 foot fireball at a central Florida propane plant and left eight injured, authorities said.

The federal Occupational Safety and Health Administration launched an investigation into the Monday night incident at the Blue Rhino propane plant, as did the Florida State Fire Marshal's office.

No one died, but eight workers were injured, four critically, including one worker who was hit by a car on a nearby road while fleeing the explosions. Officials said the damage could have been significantly worse if three 30,000-pound propane storage containers had caught fire at the plant that refills propane tanks for gas grills and other home uses. About 50 nearby houses were temporarily evacuated, though none was ultimately damaged.

If the large tanks had exploded, "it would have wiped us out," said Lake County Battalion Chief Chris Croughwell, one of the first responders to the explosions in the town northwest of Orlando.

After hearing two explosions, maintenance worker Gene Williams looked outside to see the fireball rising above an outdoor storage area at the plant.

Moments later, a forklift worker stumbled into the building with flesh hanging off his hands. His legs and face were burned. Exploding 20-pound canisters of propane began raining down around them during the series of explosions late Monday night.

Bright orange flames would grow as high as 200 feet, fueled by the exploding canisters that shot through the air like fireworks. Houses nearby shook, and residents awakened to the sound of "boom after boom after boom."

Williams said it appeared to begin about 100 yards from the loading dock in an area where some of the plant's 53,000 20-pound propane canisters are stored on plastic pallets.

The plant's two-dozen workers were preparing to go home when the explosions started, said Williams, who works the third shift. Based on what the forklift operator told him, the explosion was likely caused by a "combination of human error and bad practices, possibly. I don't want to speculate any further, that's what the forklift driver was telling me."

Williams said they were able to remotely shut the valves to the three big tanks. But they weren't able to turn on water sprays meant to keep the tanks cool during a fire.

"It was too violent, too hot, to get in there and turn them on," he said.

Croughwell said the hoses designed to spray water on the large tanks didn't go off because they had to be manually activated — requiring someone to brave dangerous conditions.

"Most sane people don't stick around for an event like this," he added.

Tavares Mayor Robert Wolfe said Tuesday that he was surprised to learn the hoses at the plant had to be manually activated. If Blue Rhino reopens the plant, Wolfe said, he plans to ask that the hoses be activated automatically by computer. "That way, it's fail-safe," Wolfe said. "We're lucky those tanks didn't explode."

"It's as sobering a situation as you can possibly imagine," Brockelmeyer said. "We have folks who are injured, and we've got Blue Rhino and Ferrellgas employees across the country who are keeping them in their prayers and sending good vibes their way."

Ferrellgas paid a $2,295 fine in November 2011 following an OSHA inspection that found a component at the end of an air hose used in the consumer tank refurbishing process was not present.

Brockelmeyer said the company corrected the issue and added that "the process is performed in an area away from where the tanks are filled....so no product was being processed in that area."

Four workers were listed in critical conditions at area hospitals. Tavares Fire Department Battalion Commander Eric Wages said five workers walked up to a command center firefighters set up near the plant Monday night with skin hanging off their arms, torso and faces. He said their arms were outstretched and they were in complete shock.

The Florida Highway Patrol confirmed that 29-year-old Leesburg resident Kaghy Sam was struck by an SUV driven by 72-year-old Gene Batson on a road near the Blue Rhino plant. A statement from the FHP said Sam was running on the road "due to a large fire and several explosions" just before 11 p.m. Monday and "ran into the direct path" of Batson's vehicle.

Sam was flown to Ocala Regional Medical Center with serious injuries. No charges were filed in the auto accident.

Croughwell said firefighters who responded to the fire had to wait to enter the plant site because conditions were so dangerous. Just as they were finally about to go in, four tractor-trailers parked next to the large propane tanks caught fire.

Chief Keith said the explosions shook his house several miles from the plant. "It truly sounded like a car hit our house," he said.

By early Tuesday, the plant's concrete lot was littered with thousands of charred 20-pound canisters.

About 50 homes were evacuated overnight, but they were allowed to return after four hours.

Marni Whitehead, 33, who lives less than a mile from the plant, said she was in bed ready to go to sleep when she heard a loud boom.

"We knew right away it was the plant, the propane plant," Whitehead said. "After that, it was just sort of panic."

Associated press writers Kyle Hightower in Orlando and Freida Frisaro in Miami contributed to this report.