Official: Nothing Criminal in Propane Explosion

Federal and state investigators trying to determine what caused a series of explosions at a central Florida propane plant said Wednesday they've uncovered nothing that indicates a crime was committed. Investigators have interviewed some workers who were at the plant when a fireball erupted in a lot outside the plant's two warehouses. 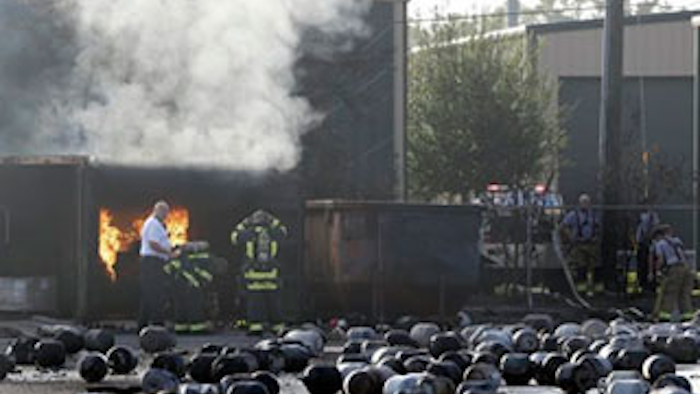 ORLANDO, Fla. (AP) — Federal and state investigators trying to determine what caused a series of explosions at a central Florida propane plant said Wednesday they've uncovered nothing that indicates a crime was committed.

Investigators have inspected the Blue Rhino plant's 5-acre property and also interviewed some workers who were at the plant when a fireball erupted in a lot outside the plant's two warehouses, said Maj. Brandon Ball of the Division of State Fire Marshal.

They have been unable to interview some of the eight workers who were injured, four critically, from the explosions due to their injuries, he said.

Investigators aren't ready to publicly say where the fire began or what caused it, Ball said, but he added that there was nothing to indicate the fire started inside the warehouses where propane canisters for gas grills are refurbished and filled. They also have done an extensive inspection on the plant's forklifts, Ball said.

Richard Keith, the fire chief of Tavares, the town northwest of Orlando where the plant fire occurred, said Tuesday that equipment failure and human error were among the possible causes.

The explosion Monday night sent flames 200 feet into the air and launched thousands of 20-pound propane canisters into the air. About 50 homes were evacuated for several hours. The day afterward, a lot next to two warehouses on the propane plant property was covered with tens of thousands of burned-out propane canisters. Officials have said the damage could have been significantly worse had three 30,000-pound propane storage containers nearby caught fire at the plant, which refills propane tanks for gas grills and other home uses.

A Blue Rhino employee who was at the plant when the explosions started told The Associated Press that based on what a forklift operator told him, the explosion was likely caused by a "combination of human error and bad practices."

The worker, Gene Williams, told the AP on Tuesday that the forklift operator came to him from the lot covered in burns from the initial fire. Williams drove him to a hospital.

Hoses designed to spray water on the large tanks didn't go off because they had to be manually activated — requiring someone to brave dangerous conditions.

Tavares City Administrator John Drury said Wednesday that this was an issue of concern for city officials and that "any corrective procedures and improvements would be looked at very closely" by fire inspectors.

Blue Rhino is a subsidiary of Kansas-based national propane provider Ferrellgas. The parent company paid a $2,295 fine in November 2011 following an OSHA inspection of the plant that found a component at the end of an air hose used in the consumer tank refurbishing process was not present.