A factory explosion that blew out windows and injured more than a dozen people likely originated in a room where acid is used to treat the surface of ball bearings, but it could be weeks before the exact cause is determined, investigators said Tuesday. 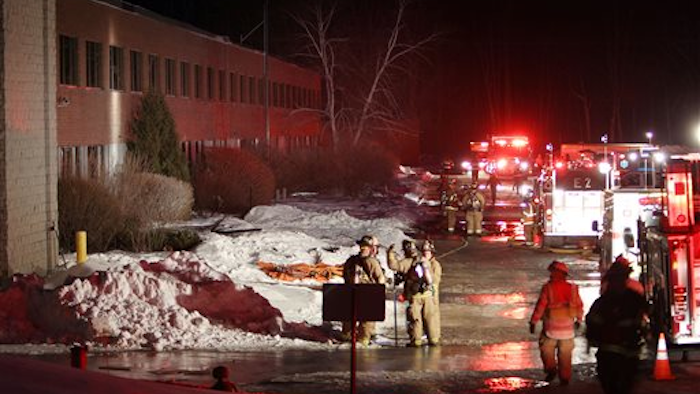 PETERBOROUGH, N.H. (AP) — A factory explosion that blew out windows and injured 15 people likely originated in a room where acid is used to treat the surface of ball bearings, but it could be weeks before the exact cause is known, investigators said Tuesday.

The Monday afternoon blast at New Hampshire Ball Bearings Inc. shattered glass, dislodged ceiling tiles and damaged walls, though the building was stable enough for investigators to work inside Tuesday.

Deputy Fire Marshal Max Schultz said the on-site investigation was expected to end later in the day, and the building would then be turned over to company officials for cleanup and repairs.

The plant makes parts for the aerospace industry and employs 700 people. Company spokeswoman Kathy Gerrity said about 450 people would have been working at the time of the blast, which happened just after a 3:30 p.m. shift change. No one was in close proximity to the blast, Schultz said.

"It's fortunate that more people weren't injured," he said. "When you have an explosion like that, it goes in every direction. It's just a matter of what stops the explosion."

Peterborough Fire Chief Joe Lenox said 14 people were injured. A spokesman for Monadnock Community Hospital said a 15th person was treated and released on Tuesday. Two people were transferred to other hospitals and the others were released by Monday night. Lenox said regular evacuation drills likely limited the number of people hurt.

"They're on top of their game when it comes to safety at the plant," he said.

Lenox and Schultz also praised first responders, including ambulance personnel who were on the scene within three minutes.

"It's about as best as something like this can go," Schultz said.

State environmental officials sampled catch basins around the building to make sure no chemicals had leakedinto the ground after the blast and found no evidence of contamination, Schultz said.

Heat and electricity were restored to most of the building by Tuesday morning. Richard Bardellini, the company's vice president of manufacturing, said once authorities determine it is safe, work will resume in the undamaged parts of the building.

Founded in Peterborough in 1946, New Hampshire Ball Bearings was purchased in 1985 by the Japanese company Minebea and has its corporate headquarters in Chatsworth, Calif.

Occupational Safety and Health Administration reports going back to 1972, the earliest they are available, show that the company's two New Hampshire facilities, in Peterborough and Laconia, were inspected five times and issued violations on three occasions. All the violations were deemed serious and one in 2005 included a Laconia worker who was hospitalized after his hand was caught between a rotating grinding wheel and a stationary work rest. The company was fined between $1,875 and $3,800 for the violations, all of which were later cut in half.

Asked about the company's safety record Tuesday, Bardellini described it as "excellent."