An explosion rocked a small-town ball bearings plant yesterday, shaking walls, shattering windows and sending at least 15 people to the hospital, but a company spokeswoman said none of their injuries appeared to be life-threatening. 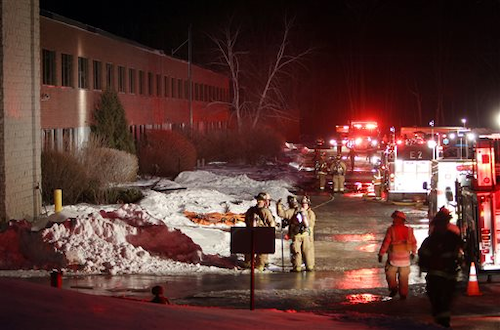 PETERBOROUGH, N.H. (AP) — An explosion rocked a small-town ball bearings plant on Monday, shaking walls, shattering windows and sending at least 15 people to the hospital, but a company spokeswoman said none of their injuries appeared to be life-threatening.

Hazardous-materials teams responded after Monday afternoon's explosion at the New Hampshire Ball Bearings Inc. plant in Peterborough, but firefighters said there didn't appear to be any environmental damage.

A plant machine operator, Paul Clark, said he was outside in the parking lot on Monday afternoon when he heard the blast.

"I was in my car backing out when I felt a rumble and heard a bang," he said. "I looked up, and snow on the building's roof was flying into the wind."

The blast blew out windows on the three-story building's ground floor, Peterborough Fire Department spokesman Eric Bowman said. There was heavy explosion damage, and the first arriving firefighters saw a column of smoke, he said.

The cause of the explosion was under investigation, but all indications were that it was an industrial-related incident, Bowman said.

First responders will try to determine the extent of the damage to the facility, company spokeswoman Kathy Gerrity said. It was unknown when the facility will be back in operation because it would need to be inspected and deemed safe first, she said.

The plant, in the southwest New Hampshire town that was the inspiration for Thornton Wilder's play "Our Town," manufactures high-tech parts for the aerospace industry and employs 700 people. Gerrity said she wasn't sure how many people were inside when the explosion happened Monday afternoon but there are usually about 450 working around that time.

Clark, who operates a machine used in a rolling procedure, said his girlfriend, Andrea Painchaud, was at work in the shipping department when the explosion knocked shelves off the walls and part of the roof came down around her. He said she was uninjured.

"Smoke came pouring out," said Clark, who lives in nearby Pepperell, Mass. "I could hear somebody screaming."

Bill Brock, owner of the Manhattan East Hair Design shop about a quarter-mile from the plant, said he heard and felt something but didn't know what it was. Then about 30 ambulances and fire trucks went by.

Gov. Maggie Hassan said the state emergency operations center was open to monitor the situation and she was "very encouraged" to hear that all employees had been accounted for.

"My thoughts and prayers go out to those injured in today's explosion, to their families and loved ones, and to the entire Peterborough area where NH Ball Bearings is such an important member of the community," she said in a statement.

Police advised drivers to avoid Route 202 through Peterborough, which has about 6,400 residents.

Local hospitals were asked to prepare for patients who may have been exposed to hazardous materials. Two of the 15 people who were treated at Monadnock Community Hospital later were flown to other hospitals, spokeswoman Laura Gingras said, and the rest were released by Monday night.

Peterborough, besides inspiring "Our Town," a Pulitzer Prize-winning play first performed in 1938, is home to the MacDowell Colony, a prestigious retreat for artists, writers and composers. Wilder based the fictional town of Grover's Corners on Peterborough, where he often spent his summers.