Ford managed to make its plug-in Fusion Energi gasoline-electric hybrid more fuel efficient for 2017, even while lowering the base price. Federal government fuel economy ratings for this mid-size sedan are increased from last year and now are 42 mpg in combined city/highway travel on gasoline... 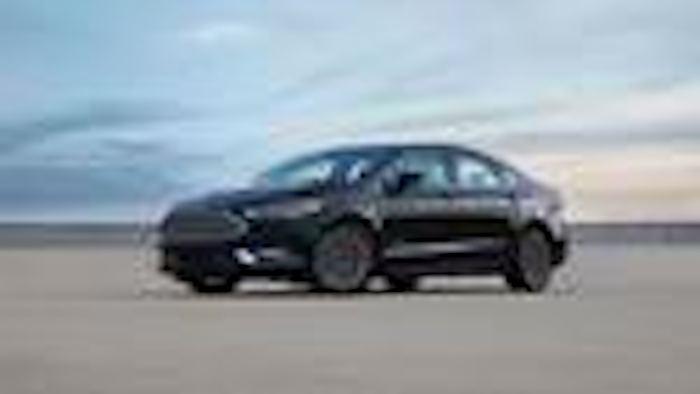 Ford managed to make its plug-in Fusion Energi gasoline-electric hybrid more fuel efficient for 2017, even while lowering the base price.

Federal government fuel economy ratings for this mid-size sedan are increased from last year and now are 42 mpg in combined city/highway travel on gasoline power, with up to 21 miles of travel available on electric power alone. The 2016 model got 38 mpg.

The result is an impressive travel range of just over 600 miles on a tank of gas, enough to drive nonstop from Chicago to Kansas City, Mo., and to have enough fuel left over to tour the town.

The 2017 Fusion Energi has a lower starting manufacturer's suggested retail price of $31,995, compared to last year's $34,775. Those prices include the destination charge. The new model looks good, too, maintaining its Aston Martin-type looks and adding a subtly restyled grille, freshened rear-end treatment and a rotary dial gear-shifter to give drivers have easier access to storage spots.

A new top-end model, the Fusion Energi Platinum, adds luxury features such as leather-wrapped and stitched instrument panel and an upscale 12-speaker Sony audio system, plus new standard safety features such as front pedestrian detection and blind spot monitor. It retails for $39,995.

The 2017 Fusion is a recommended buy of Consumer Reports magazine, with a reliability rating of better than average.

The Fusion Energi is versatile and can make trips of no more than 21 miles on electric power only. The driver just presses an EV button inside the car to activate this mode, which allows speeds of up to 85 miles per hour on electric power.

For longer trips, it can operate as a regular gas-electric hybrid, meaning the four-cylinder engine and lithium ion battery pack combine to propel the front-wheel drive car. Working together, the two power sources deliver 195 horsepower.

The test-driven Fusion Energi Platinum was comfortable to drive, with its premium leather seats. The front seats can be quickly heated or cooled and comfortably positioned, with 10-way power adjustments.

A standard moonroof gave the cabin an airy feel, and front-seat legroom of 44.3 inches is unexpectedly generous and more than what's in a 2017 Toyota Camry Hybrid. The Ford's back-seat legroom is good, too, at 38.3 inches, which is just 0.6 inch less than a 2017 Camry Hybrid's back seat.

The Fusion Energi's trunk space, however, is restricted to only 8.2 cubic feet by the sizable battery pack that's behind the rear seatbacks. The car is also heavy, weighing some 4,000 pounds, and the weight of the battery pack at the back can be noticeable.

Still, the instant torque of the electric power and the 2-liter Atkinson-cycle four cylinder, supplemented by the electric power, worked well to help the tester feel responsive, in an albeit artificial-feeling way.

The test-driven model's brakes also felt a bit underwhelming and were difficult to modulate for smooth stops.

Ring to Identify ‘Suspicious’ People by Voice, Fingerprint or Odor

This could help the carmaker catch up with Tesla.
Jan 6th, 2022

Robot is More Centaur than Humanoid

And it's dextrous. Also, another flying saucer, and Lockheed, Amazon and Cisco partner on Star Trek tech.
Jan 6th, 2022
Follow Us
Most Recent