Chevy Bolt isn't stylish, but GM is pushing its practicality

DETROIT (AP) — The executive in charge of marketing the new electric Chevrolet Bolt keeps coming back to one word. "Driving an electric vehicle is just now practical," Darin Gesse says of the Bolt. He repeats "practical" with the same fervor that Elon Musk might say "compelling." Gesse isn't... 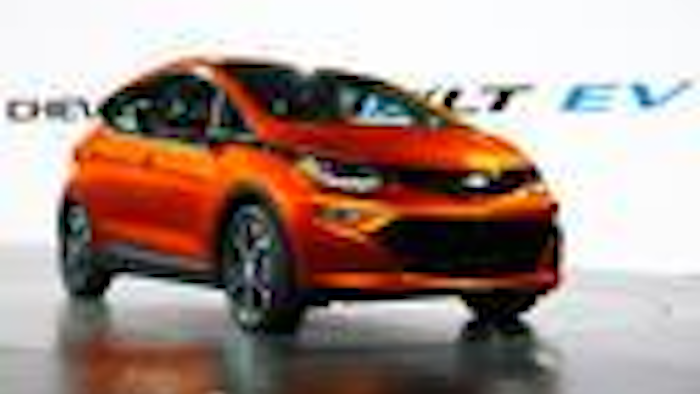 DETROIT (AP) — The executive in charge of marketing the new electric Chevrolet Bolt keeps coming back to one word.

"Driving an electric vehicle is just now practical," Darin Gesse says of the Bolt. He repeats "practical" with the same fervor that Elon Musk might say "compelling."

Gesse isn't plugging style or promising to awe your neighbors like Musk and Tesla Motors. In fact, the styling of the Bolt is so ordinary the people next door may not even notice the hatchback in your driveway.

What Gesse and General Motors want consumers to see is a car that will cater to their everyday needs — commuting, shopping, transporting children and gear — all on one charge of the battery. It's the first electric to get more than 200 miles per charge (238 to be exact) and fit most buyers' budgets (around $30,000, after a government tax credit). There are other things to like: gobs of interior space, a near-silent ride, no tailpipe emissions, and a 6.5-second zero-to-60 time that can beat a lot of old V8 muscle cars.

The Bolt hits showrooms in California and Oregon in days and rolls out nationwide next year. The highly-anticipated Model 3, Tesla's first mass-market car, won't be ready until at least the end of next year. While GM is proud of its head start, the company didn't even take pre-orders for the Bolt. Meanwhile, more than 300,000 people have already plunked down $1,000 to reserve the $35,000 Model 3.

For the practical Chevy buyer weighing an electric versus a comparable gas-powered vehicle, the electric's higher price is a major consideration.

Right now, with gasoline around $2 per gallon nationwide, the numbers don't necessarily work in the Bolt's favor. A rough calculation of operating costs shows it will take more than 24 years for a Bolt owner to recoup the extra cost over a comparable gas-powered Chevrolet Cruze.

The Bolt will save a buyer $450 per year on fuel at the current average gas price of $2.13 per gallon, according to the Environmental Protection Agency. Also, a Cruze owner would have to change oil at least twice per year for a total of $60. But insurance is generally 15 percent to 25 percent higher for electric cars, according to the Insurance Information Institute. That erases about $200 of annual savings. So the Bolt owner is saving only about $310 per year.

Yet cost isn't the whole equation for the Bolt's target buyer, highly educated people in their 40s with disposable income who are technology leaders among peers, says Gesse. The cost difference doesn't include time wasted standing at a gas pump, nor does it reflect that electric cars are better for the environment, he says.

The environment is important to Josh Liss, 30, a security analyst from near Princeton, N.J., who doesn't care so much about operating costs. He's got solar panels on his house to generate electricity and would be willing to trade his Ford C-Max plug-in hybrid in for a Bolt with the right deal.

But Liss personifies a major challenge for GM. The Bolt's pedestrian looks give him pause. He says if he gets a one, it only would be a stopgap car until he can buy a Model 3.

"I think they have enough of the technical bells and whistles and the cool factor to hold me over a couple of years," Liss said of the Bolt. If GM can give the Bolt a sportier, sexier look with more luxury, the company "would have far better chances of attracting the (waiting) lines that Tesla has."

While the Bolt won't have advanced features such as Telsa's Autopilot semi-autonomous driving system — an extra charge in the Model 3 — it's no tech slouch. It comes with a 10.2-inch touch screen with Apple CarPlay and Android Auto to integrate smartphones. And automatic emergency braking, lane centering and front pedestrian detection and braking are available.

Jake Fisher, Consumer Reports' director of automotive testing, says the Bolt drives great and has lots of space, but he agrees with Liss that it lacks the Model 3's sleek appeal. Fisher says there's a tug-of-war between designers and pragmatic engineers at every automaker. "The Bolt strikes me as a car where the engineers won every battle," he says.

Fisher expects GM to build a sportier-looking model on Bolt underpinnings before the Model 3 debuts. Gesse wouldn't confirm that but says electric vehicles in general are likely to have more body styles to match competitors.

Throughout GM, the company is proud to have beaten Tesla to the long-range, affordable electric car. Battery engineers tout years of electric car experience dating to the EV1 of the 1990s. And the company says that unlike Tesla, there's a nationwide dealer network should something go wrong.

The Bolt's range more than covers the average daily round-trip commute of about 40 miles in the U.S. But the 9.5 hours it takes to fully charge from empty will be an adjustment for those who have a late night at work or forget to plug cars in, said Stephanie Brinley, an auto analyst for IHS Markit.

Charging time aside, Gesse doesn't care if only a few people are waiting for the Bolt. He's selling a brand that's made cars for over 100 years, something Tesla can't say.

"We don't need to take reservations and deposits to fund the development and engineering of our vehicles," he says in a kind-of-snarky shot at Tesla, which recently posted its first quarterly profit in three years. "We've been generating revenue, cash flow."