WASHINGTON (AP) — Donald Trump changed some of his facts to fit his agenda Monday, pitching shades of truth and misconceptions in what was billed as a major economic policy speech. He wrongly accused Hillary Clinton of proposing to increase middle-class taxes and blamed crumbling roads and... 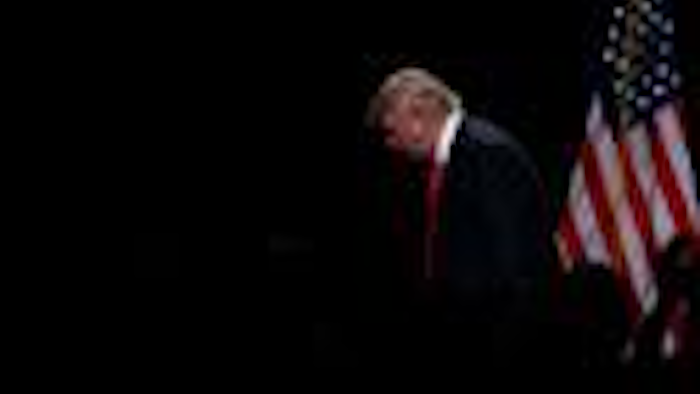 WASHINGTON (AP) — Donald Trump changed some of his facts to fit his agenda Monday, pitching shades of truth and misconceptions in what was billed as a major economic policy speech.

He wrongly accused Hillary Clinton of proposing to increase middle-class taxes and blamed crumbling roads and bridges on money spent on refugees, a minuscule expense in comparison with infrastructure. He overstated the corporate tax burden and declared the jobless rate — the prime statistic for holding leaders accountable for the state of the economy — a hoax.

A look at some of his claims and how they compare with the facts:

TRUMP: "She said she wanted to raise taxes on the middle class."

THE FACTS: If Clinton said that — and it's debatable — it's clear she didn't mean to. Her economic agenda calls for middle-class tax cuts (which are not specified) and she has repeatedly said she would not raise taxes on middle incomes. In a speech in Omaha, Nebraska, last week, she talked about "fairer rules for the middle class" and delivered a line that was difficult to understand, either "we are going to raise taxes on the middle class" or "we aren't."

If she said the former, it was obviously a flub. Her policy on middle-class taxes has been consistent — no increases.

TRUMP: "You cannot ever start a small business under the tremendous regulatory burden that you have today in our country."

THE FACTS: Trump is exaggerating. There are clear signs that new business formation has slowed, but it hasn't ground to the halt that he suggests.

Between 2011 and 2013, the most recent years available, the Census Bureau found that the number of companies that employ fewer than four people has increased by 43,232 to 3.58 million.

Nor should anyone assume that regulation alone explains the decline in small business starts. Most entrepreneurs relied on personal savings, home equity and credit cards to finance new companies before the housing bust hurt their ability to access credit, according to a speech by Dennis Lockhart, president of the Federal Reserve Bank of Atlanta. Other studies say student loans are inhibiting entrepreneurship among younger Americans.

TRUMP: "Our roads and bridges fell into disrepair, yet we found the money to resettle millions of refugees at taxpayer expense."

THE FACT: You have to go a long way back to get to "millions" of refugees.

Over the last eight years, the period Trump addresses when pointing to failures of President Barack Obama, the U.S. resettled 530,830 refugees. That includes many from the final year of the Bush administration. So far in the budget year that ends Sept. 30, the U.S. has resettled 59,099 refugees. Last year, 69,933. Over the last 15 years: about 850,000.

The State Department puts the cost of the resettlement program to taxpayers at less than $1.2 billion a year. That's roughly 0.03 percent of the federal budget, a rounding error according to most experts. That sum would hardly make up for the infrastructure shortfall. The American Society of Civil Engineers said in a report that the government needs to spend $1.4 trillion through 2025 to close the infrastructure funding gap.

TRUMP: "According to the Bureau of Labor Statistics, before NAFTA went into effect, there were 285,000 auto workers in Michigan. Today, that number is only 160,000."

THE FACTS: Trump is playing fast and loose with the stats. The numbers cited in his speech don't even line up with the footnotes provided by his campaign.

Michigan actually added jobs after the North American Free Trade Agreement began in 1994, when auto plants employed roughly 200,000 workers. Over the next six years, their ranks increased to 231,000. The decline only occurred after the tech bubble burst and U.S. automakers lost market share among U.S. consumers, a decline that prompted a government bailout that caused Michigan auto jobs to start rising again in late 2009.

Many U.S. auto jobs also relocated to other states. Foreign automakers such as Toyota, Honda and Nissan built plants in other states, including Ohio, Indiana, Kentucky, Tennessee and Alabama.

TRUMP on the unemployment rate: "This 5 percent figure is one of the biggest hoaxes in modern American politics."

THE FACTS: The unemployment rate has its shortcomings but it is not a hoax.

The unemployment rate has become controversial since the recession ended because many people have stopped looking for work, and the government doesn't count those out of work unless they are actively searching for jobs. If an unemployed person gives up on a job hunt, that reduces the unemployment rate without anyone being hired, so it has overstated the improvement in the job market.

Still, a broader measure of unemployment that includes people who have recently stopped looking for jobs has also fallen — from a peak of 17.4 percent in 2010 to 9.7 percent now.

The proportion of Americans working or looking for work is now 62.8 percent, near the lowest level since the 1970s. That's down from 66 percent before the recession. At least half that decline in the workforce stems from greater retirements, as baby boomers age.

Many of the figures Trump cited in his speech are compiled by the same monthly survey that produces the unemployment figure he considers a hoax.

TRUMP: "The United States also has the highest business tax rate among the major industrialized nations of the world, at 35 percent. It's almost 40 percent when you add in taxes at the state level."

THE FACTS: The stated corporate tax rate looks high, but most U.S. businesses don't pay it. The tax code is full of deductions, credits and loopholes that limit the tax burden for many companies. The effective corporate income tax rate is around 27 percent, roughly in line with global averages, according to government estimates.

Another way to look at it is examining federal corporate taxes as a share of the U.S. economy. Corporate taxes made up just 1.9 percent last year, according to the government. That is well below the historic average of 2.7 percent, but slightly above the Reagan-era levels during the 1980s. In some years, the majority of all large U.S.-controlled corporations reported no federal tax liability, according to the Government Accountability Office.

TRUMP, on what would happen if he became president: "The auto industry will come roaring back."

THE FACTS: The industry has already roared back from the financial crisis. Total U.S. auto sales reached a record level of 17.5 million last year, and are on track to top that figure this year. Overseas automakers are benefiting from those sales, but many foreign car makers such as Toyota, Honda and Volkswagen have factories in the United States. Ford Motor Co., meanwhile, says its sales are at the highest level in a decade.

THE FACTS: Since Obama's health care law came into effect, the economy has added more than 14.6 million jobs and the jobless rate has fallen to 4.9 percent from 9.9. percent. So how can it be that repealing the law would mean 2 million more jobs?

Trump's charge has its origins in an estimate by the nonpartisan Congressional Budget Office that the labor force would be smaller by about 2 million workers in 2025 under the health care law than without it. But that's not because the law is a job-killer. The agency explained that the main impact of subsidized coverage under the law is on the supply of labor. Translation: It gives many people the opportunity to retire, stay at home with family or switch to part-time work, because they can get health insurance more easily outside of their jobs.

That voluntary retreat from the workforce, made possible by the law's benefits, is not the same as employers slashing jobs because of the law's costs.

Overall, the health care law seems to have had limited impact on jobs.

TRUMP: "Nearly 12 million people have been added to the food stamp rolls and ... it's growing so rapidly since President Obama took office."

THE FACTS: He's right that the number of food stamp recipients has grown substantially since Obama took office. More than 28 million people received food stamps in 2008, before Obama was inaugurated. As of May, the most recent data available, 43.5 million people were receiving them.

If anything, Trump understated the rise of food-stamp recipients when he put the increase at nearly 12 million. His figure appears to be from 2009, when Obama already was in office.

The number grew rapidly in the aftermath of the recession, peaking at 47.8 million in 2012. It's fallen 9 percent since. That's because of an improving economy and the return of a three-month time limit on benefits for unemployed, childless adults that was suspended in many states when unemployment rates spiked. Even so, it remains far higher than before Obama became president.