WASHINGTON (AP) — The Latest on the U.S. presidential race (all times EDT): 1:15 p.m. Donald Trump is wrongly claiming that his Democratic rival Hillary Clinton supports the Trans-Pacific Partnership. Trump claims during an economic speech he's delivering in Detroit that "a vote for Hillary... 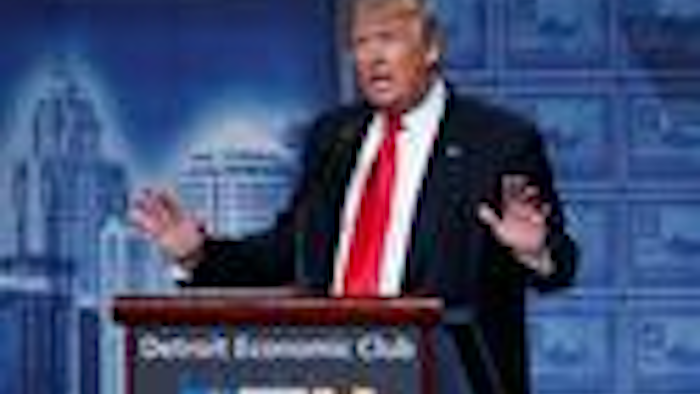 Trump claims during an economic speech he's delivering in Detroit that "a vote for Hillary Clinton is a vote for TPP."

He's citing comments made by Virginia Gov. Terry McAuliffe during the Democratic National Convention that he expects Clinton to change her position on the Asia-Pacific trade deal and support it if she's elected to the White House.

Clinton supported the TPP as secretary of state, but announced her opposition last October, saying it failed to meet her test of providing good jobs, raising wages and protecting national security.

Republican Donald Trump says that no business should pay more than 15 percent of income in taxes.

And he's calling for a temporary moratorium on federal regulations.

In a speech at the Detroit Economic Club, Trump is also proposing allowing parents to fully deduct the average cost of childcare from their taxable income.

The current Child and Dependent Care tax credit is capped at 35 percent of qualifying expenses or up to $3,000 for one cared-for individual or $6,000 for two or more.

A senior campaign aide says the proposal would be aimed at working and middle class families and that it would include an income limit, though the person declined to say how much. The person spoke on condition of anonymity to discuss details ahead of the speech.

Donald Trump is overhauling the income tax proposal he unveiled during the Republican primary and increasing the amount that would be paid by the highest-income earners.

Trump says in an economic speech in Detroit that he wants to simplify the tax code to three brackets: 12 percent, 25 percent and 33 percent of income.

That's a change from September, 2015, when he proposed four brackets that would pay zero, 10 percent, 20 percent and 25 percent.

He says, "We will make America grow again."

Experts said his old plan would have increased the debt by as much as $10 trillion over the next decade.

A string of protests during Donald Trump's economic speech in Detroit appear to be coordinated.

About 10 women have individually stood up and shouted "Mr. Trump," followed by questions that have been drowned out by boos. The protests are occurring in intervals every few minutes and each woman has used the same tactic.

Trump himself noted the protests seemed well planned. Trump is at times pausing while the protesters are dragged out and sometimes continuing his remarks. But he has not directly addressed any of the protesters or demanded they be removed as he has at previous events.

Trump is beginning an economic policy speech in Detroit by going after Democratic rival Hillary Clinton. He says she supports policies that have shipped jobs overseas.

He says, "she is the candidate of the past. Ours is the campaign of the future."

Trump is speaking in Detroit, a city that is a symbol of the country's manufacturing decline.

As Trump began to speak, he was repeatedly interrupted by protesters. Security personnel removed the protesters to loud applause from the audience at the Detroit Economic Club.

Donald Trump is being interrupted by three protesters just minutes into a major economic policy speech in Detroit.

Security has removed two women who stood up and began shouting as Trump spoke. One woman stood on a chair and was quickly pulled down and escorted. Another stood up several minutes later and was also removed.

It was unclear what the women were shouting.

Audience members are largely showing support for the women's removal, applauding as security guards lead them out. One person in the crowd shouted, "We love you, Trump!"

After the third protester, Trump said: This is what happens when you go from 35 people to 2,000."

Donald Trump's campaign has pulled his tax plan from his website ahead of a planned relaunch on Monday.

Trump is in Detroit to unveil a new version of his economic plan. He's calling for cutting business taxes, eliminating regulations and boosting domestic energy production. His plan calls for reducing the number of tax brackets down to three.

As recently as Sunday, Trump's campaign website featured his previous tax plan under a section describing his policy positions. The page had said his priorities were to provide middle-class tax relief, simply the tax code, grow the economy and avoid adding to the national debt.

Trump is revisiting his economic plan as he tries to move past a rough patch in his campaign marked by comments that have drawn criticism from both parties.

Donald Trump apparently has won over at least one member of the Bush family.

George P. Bush, the Texas land commissioner and son of former Florida Gov. Jeb Bush, is seen on a video posted online encouraging Republicans to unite behind the Republican nominee. The Texas Tribune reports the video of Bush's remarks was taken Saturday at meeting for state party activists.

He acknowledges that "from Team Bush it's a bitter pill to swallow. But added: "You get back up and you help the man that won and you make sure that we stop Hillary Clinton."

An early favorite in the Republican presidential race, Jeb Bush said in May that he wouldn't vote for Trump. Former presidents George H.W. Bush and George W. Bush have also withheld their support.

With a speech Monday to the prestigious Detroit Economic Club, the Republican presidential nominee seeks to reset his campaign and delve into a subject that is seen as one of his strengths.

The speech also is aimed at showing that Trump is a serious candidate in spite of a disastrous stretch that prompted criticism from Republicans and Democrats alike.

While polls have shown that voters have deep concerns about Trump's temperament and fitness for office, recent polling puts him ahead of or on par with his Democratic rival, Hillary Clinton, on who people trust on the economy.