CANBERRA, Australia (AP) — Australia's era of political chaos continued on Saturday, with a general election failing to deliver an immediate victor and raising the prospect of a hung parliament. Hours after the polls closed, Prime Minister Malcolm Turnbull sounded a confident tone despite early... 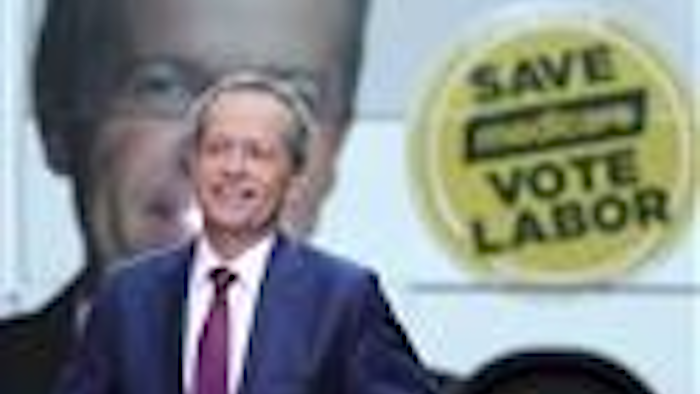 CANBERRA, Australia (AP) — Australia's era of political chaos continued on Saturday, with a general election failing to deliver an immediate victor and raising the prospect of a hung parliament.

"Based on the advice I have from the party officials, we can have every confidence that we will form a coalition majority government in the next parliament," Turnbull said in a speech to cheering supporters early Sunday morning.

Opposition leader Bill Shorten did not speculate on a Labor victory but celebrated the strong swing to his party only three years after it was convincingly dumped from power in the last election.

"There is one thing for sure. The Labor Party is back," he said in a speech to supporters.

Parties need to hold at least 76 seats in the 150-seat House of Representatives to form a government. When the count was suspended early Sunday, the Australian Electoral Commission said Labor was leading in 72 seats, Turnbull's coalition in 66 seats, and minor parties or independents in five seats. Counting was less clear in another seven seats.

The final tally was not expected to be known until Tuesday, after mail-in ballots and those cast ahead of Saturday's election were counted. In past elections, these votes have favored the conservatives.

Just two possibilities remain: The coalition will win by the slimmest of margins, or there will be a hung parliament.

Nick Xenophon, leader of the Nick Xenophon Team minor party, would not say on Sunday which side his party's sole lawmaker in the House of Representatives might support in a hung parliament.

"It still looks more likely than not that Malcolm Turnbull will have the numbers — just," Xenophon, a senator, told Nine Network television.

"But If he doesn't, then it's a question of sitting down in good faith with both sides to go through a number of key issues ... that are in the national interest," he added. These issues included maintaining manufacturing and farming jobs in Australia and reducing problem gambling in the community.

Turnbull called the rare early election — dubbed a "double dissolution" because both the House and the Senate are dissolved — in a bid to break a legislative deadlock over a bill that would have created a construction industry watchdog. But the result of the election may bring further deadlock: If neither party earns a majority of seats in the House, both Labor and the coalition will be forced to try to forge alliances with independent lawmakers to form a minority government.

Hung parliaments are extremely rare in Australia, with only two since 1940. The most recent was in 2010, when then-Prime Minister Julia Gillard's ruling Labor Party was forced to secure an alliance with the minor Greens party and three independent lawmakers to form a fragile minority government. Three years later, the coalition swept to power after winning 90 seats.

Tony Abbott, the prime minister ousted by Turnbull in September in an internal party showdown due to poor opinion polling, declined to say on Sunday whether he would have led a stronger campaign.

"I'm just not going to speculate on that. The fact is that I didn't," Abbott told reporters outside his Sydney home. "It's obviously been an extremely tight result."

Saturday's elections continue an extraordinarily volatile period in the nation's politics, where internal party squabbling and fears over sagging poll ratings have prompted five changes of prime minister in as many years.

Amid the chaos, Labor and the coalition each tried to paint themselves as the safer, more stable choice. But selling stability was a tough job for either party, both of which have been marred by infighting in recent years. Bill Shorten played a key role in ousting two of Labor's own prime ministers in the space of three years, and Turnbull himself ousted Abbott less than a year ago. Up until 2007, conservative John Howard served as prime minister for nearly 12 years.

"Whatever happens next week, Mr. Turnbull will never be able to claim that the people of Australia have adopted his ideological agenda," Shorten told supporters. "He will never again be able to promise the stability which he has completely failed to deliver tonight."

Monash University political expert Nick Economou said Turnbull's leadership had been terminally damaged by his decision to call the early election. It involved the longest campaign since 1969 and appeared to have delivered several hard-line social conservatives and right-wingers to the Senate that the moderate prime minister would have difficulty working with if his government survives, Economou said.

"What an amazing amount of political damage Malcolm Turnbull has been able to inflict in a very short period of time as prime minister," Economou said. "I think his credibility is shot to pieces."

Opinion polls had predicted a close race, but had largely tipped the government to win by a narrow margin. Several government ministers blamed the surprisingly strong result for Labor on what they dubbed a dishonest campaign that claimed the conservatives were threatening Australia's universal health care system known as Medicare.

"Even today people were talking about not being able to afford health care because we were going to get rid of Medicare. It was utter rubbish," Liberal Party Deputy Leader Julie Bishop told the Australian Broadcasting Corp. "But what do you do when one party relies on a monstrous lie to get elected?"

Two weeks before the election, Shorten ramped up his campaign on health policy by describing the poll as a referendum on the future of Medicare. A Labor government introduced the government-funded program in 1984 to provide free or subsidized health care for all Australian citizens and permanent residents.

Labor accused the government of planning to privatize Medicare — a claim Turnbull dismissed as an audacious scare campaign.

But aside from the privatization debate, Shorten also promised to better fund Medicare than the government. He vowed to increase the government subsidies paid to private doctors to treat patients. The government had frozen the subsidy rate for the next four years, with many patients likely to be charged more for consultations.

Shorten also promised to restore incentives paid to private companies to provide free X-ray and pathology services to patients. The government cut those incentives from July 1.

The government focused much of its campaign on a promise to generate jobs and economic growth through tax cuts to big businesses. Economic growth is a key issue for many Australians, who have seen thousands of jobs vanish from the country's once-booming resources sector amid China's industrial slowdown.

Labor has said it will keep the higher tax rates and use the revenue to better fund schools and hospitals.