Clashes amid Italy's crackdown on its Chinese community

ROME (AP) — A crackdown by Italian authorities on the increasingly powerful Chinese community in Tuscany resulted in new searches Friday in Italy's Chinatown and clashes this week that drew the ire of China's Foreign Ministry. Several people were injured in clashes Wednesday outside a factory... 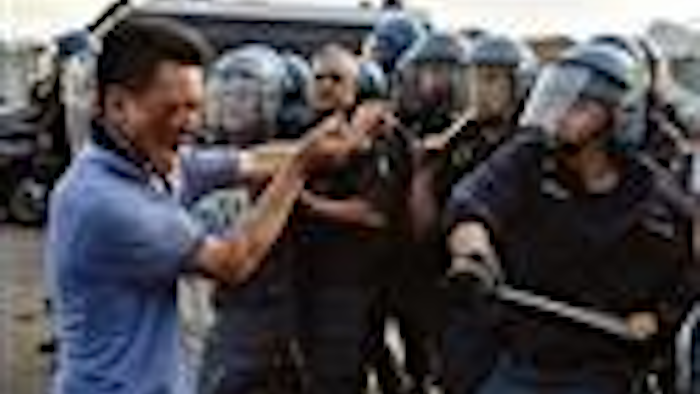 ROME (AP) — A crackdown by Italian authorities on the increasingly powerful Chinese community in Tuscany resulted in new searches Friday in Italy's Chinatown and clashes this week that drew the ire of China's Foreign Ministry.

Several people were injured in clashes Wednesday outside a factory near Florence where workers tried to prevent Italian health inspectors from entering. Riot police were called in after members of the Chinese community, including the leader of a vigilante group, descended on the scene.

On Friday, Chinese Foreign Ministry spokesman Hong Lei said the Chinese embassy and consulate had lodged a complaint with Italy, "urging it to carry out civilized law enforcement and fair investigation" while protecting the rights and safety of Chinese citizens in Italy.

Italy has beefed up inspections of Chinese-run businesses following a 2013 fire at a Chinese-run garment factory that killed seven people in Prato, the heavily Chinese manufacturing district in Tuscany known for its black market factories and illegal workers.

Chinese activists have complained that Italian authorities are only interested in handing out fines, and are planning protests this weekend.

As part of the crackdown, police in Prato conducted searches Friday and placed nine people under investigation in a separate probe into the operations of a Chinese community group, the White Stag association, said Prato's deputy police chief, Francesco Nannucci. He said members of the group, formed recently to safeguard the interests of the Chinese community, had conducted vigilante patrols, beating up Moroccans and other North Africans.

Those detained were accused of criminal association aimed at racial violence, he said.

Nannucci said Friday's searches were unrelated to the clashes earlier in the week but were part of a broader crackdown into criminal activity within the Chinese community. He noted that the head of the White Stag association and another Chinese expat were arrested last month as part of an investigation into prostitution and the drug trade in Chinese-run nightclubs.

The Italian crackdown is also financial: Preliminary hearings are underway in Florence against some 300 people accused of money-laundering charges after 5 billion euros ($5.6 billion) passed from Italy to China via wire transfers.

A judge in April rejected a prosecutors' request to indict three Bank of China officials in the probe, saying he must interrogate them first, news reports said.