US says IS chem weapons effort "degraded" but not destroyed

WASHINGTON (AP) — The U.S. has "disrupted and degraded" the Islamic State's ability to produce chemical weapons by launching multiple airstrikes in Iraq based on information provided by a militant leader who was captured last month and turned over to the Iraqi government on Thursday, Pentagon... 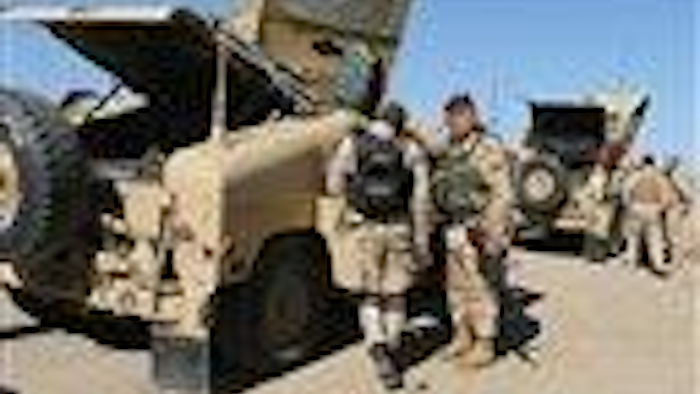 WASHINGTON (AP) — The U.S. has "disrupted and degraded" the Islamic State's ability to produce chemical weapons by launching multiple airstrikes in Iraq based on information provided by a militant leader who was captured last month and turned over to the Iraqi government on Thursday, Pentagon officials said.

"We feel good about the damage we've done to the program," Pentagon press secretary Peter Cook said. He declined to say which elements of the militants' chemical weapons program were struck or how severely they were damaged. "I'm not going to say we knocked it out in full, but we feel confident that we made a difference."

Cook said Sulayman Dawud al-Bakkar, whom he described as the Islamic State's "emir of chemical and traditional weapons," gave up important information about the chemical weapons program during interrogations after being captured in February. Cook declined to say more about the capture, but other defense officials have said al-Bakkar, also known as Sleiman Daoud al-Afari, was captured by U.S. special forces in northern Iraq.

In its daily tally of airstrikes in Iraq and Syria, the U.S.-led coalition reported on Sunday that it conducted two airstrikes Saturday near Mosul against an IS "weapons production facility," but it did not specify that this was a chemical weapons facility. Cook declined to specify which airstrikes were carried out on the basis of al-Bakkar's information, saying to do so could compromise future military action against the Islamic State.

Cook declined to offer details about the size, scope or components of what he called a dangerous Islamic State chemical weapons effort.

"These are agents that obviously cause tremendous suffering for people," he said. "We've seen their use demonstrated in Syria and Iraq." He referred to public reports of the use by IS of sulfur mustard in a powder form.

Asked whether the Iraqi government had promised to make al-Bakkar available for further U.S. interrogation as part of the arrangement for transferring him from U.S. custody on Thursday, Cook replied, "We feel confident that we have the cooperation of the government of Iraq in this particular instance."

Al-Bakkar worked for the late Iraqi President Saddam Hussein's now-dissolved Military Industrialization Authority, where he specialized in chemical and biological weapons. Iraqi intelligence officials said he is about 50 years old and headed the Islamic State group's recently established branch for the research and development of chemical weapons.

He was captured in a raid near the northern Iraqi town of Tal Afar, the officials said. They spoke on condition of anonymity because they weren't authorized to discuss the matter publicly.