The probe was launched after provincial and health authorities separately reported that since November, about a half-dozen babies died shortly after receiving hepatitis B vaccine made by Biokangtai. One case has been ruled out while the others are still being investigated. 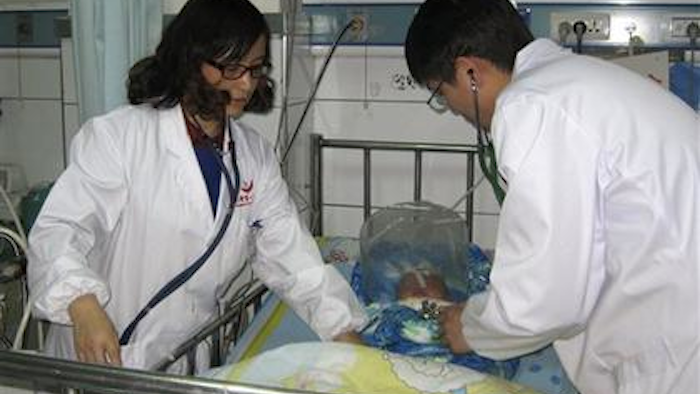 BEIJING (AP) — China sent health experts to investigate a drug maker Tuesday to see if several recent deaths of babies were related to a vaccine they received in a government immunization program.

A team of government investigators was sent to Biokangtai, a drug maker based in the southern city of Shenzhen, state broadcaster China Central Television said, amid growing public concern about the safety of the vaccine.

The probe was launched after provincial and health authorities separately reported that since November, about a half-dozen babies died shortly after receiving hepatitis B vaccine made by Biokangtai. One case has been ruled out while the others are still being investigated.

Repeated calls to Biokangtai's Shenzhen headquarters were disconnected after a few rings. In a statement earlier this month, the company said it was confident of the safety of its products and that the deaths could be caused by underlying diseases that coincidentally began showing symptoms after the vaccinations.

"Coincidental diseases arise the most easily and are the easiest to misinterpret," the statement on Biokangtai's website said.

A senior government expert on diseases said vaccine-related deaths could be due to coincidence, but that Biokangtai was not in a position to make an objective assessment.

"We should not treat the company's statement like a conclusion," Dr. Zeng Guang, chief epidemiologist with the China Center for Disease Control and Prevention, said in a phone interview. "They may be trying to protect their self-interest. Or they may have a lot of confidence in their product."

Hepatitis B is a chronic liver infection that is spread through the blood or bodily fluids of infected people. It can cause liver inflammation and jaundice.

The vaccine was given to children free of charge as part of the government's national immunization program. Chinese health authorities suspended the use of Biokangtai's hepatitis B vaccine last Friday after the first deaths of babies were reported.

Four babies reportedly died in the southern province of Guangdong, although one was said to have died from pneumonia. The National Health and Family Planning Commission reported that two babies in Hunan province and another in Sichuan had also died in a similar way.

One more child in Sichuan died on Monday, less than 24 hours after receiving a hepatitis B vaccine made by a different company, the official Xinhua News Agency said.

Autopsies were being conducted and results were expected in a few weeks, reports said.

Public confidence in Chinese health authorities and the country's drug safety regime is shaky at best, though improvements have been made in recent years since government agencies withheld information about the spread of SARS and bird flu.

Concerns over vaccine safety have surfaced in recent years after media reports of problems with vaccines for encephalitis, hepatitis B and other diseases, though the health ministry said the vaccines had been improperly stored but were unrelated to subsequent illnesses that were reported.

Zeng, the government expert, urged the public not to panic, saying that in general Chinese vaccines were safe and that more people would die if everyone refused inoculations.

"If the public refuses to be vaccinated, or if they try to change the vaccination procedures, the consequence will be extremely bad," Zeng said. "Instead of several deaths, it will cause tens of thousands of deaths."