Strange infections don't pose an increased health threat to humans, scientists say, but they could be devastating to prized species and their fishermen. 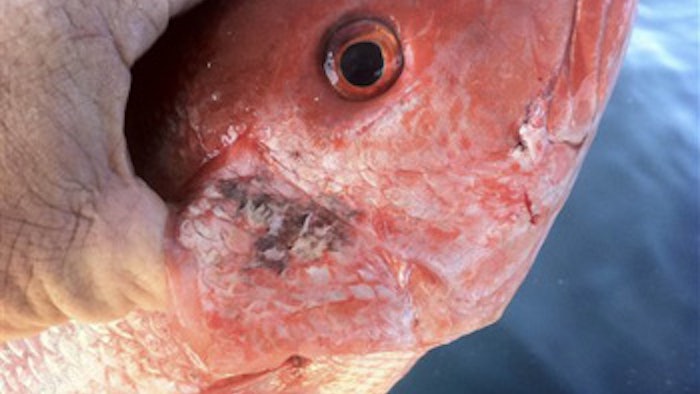 BARATARIA BAY, La. (AP) — Two years after the Deepwater Horizon rig exploded and sank in the Gulf of Mexico, touching off the worst offshore spill in U.S. history, research into the disaster's environmental effects is turning up ailing fish that bear hallmarks of diseases tied to petroleum and other pollutants.

Those illnesses don't pose an increased health threat to humans, scientists say, but the problems could be devastating to prized species such as grouper and red snapper, and to the people who make their living catching them.

There's no saying for sure what's causing the diseases in what's still a relatively small percentage of the fish, because the scientists have no baseline data on sick fish in the Gulf from before the spill to form a frame of reference. The first comprehensive research may be years from publication. And the Gulf is assaulted with all kinds of contaminants every day.

Still, it's clear to fishermen and researchers alike that something's amiss.

— A recent batch of test results revealed the presence of oil in the bile extracted from fish caught in August 2011, a year after BP's broken well was capped and nearly 15 months after it first blew out on April 20, 2010, leading to the rig explosion that killed 11 men.

"Bile tells you what a fish's last meal was," said Steve Murawski, a marine biologist with the University of South Florida who was chief science adviser for the National Marine Fisheries Service until November 2010 when he began working on oil spill studies for USF. "There was as late as August of last year an oil source out there that some of those animals were consuming."

Bile in red snapper, yellow-edge grouper and a few other species contained on average 125 parts per million of naphthalene, a compound found in crude oil, Murawski said. Scientists expect to find almost none of the toxin in fish captured in the open ocean.

"Those levels are indicative of polluted urban estuaries," he said.

— Last summer, a team of scientists led by USF conducted what experts say is the most extensive study yet of sick fish in shallow and deep Gulf waters. Over seven cruises in July and August, the scientists caught about 4,000 fish — from Florida's Dry Tortugas to central Louisiana — using miles-long fishing lines dragged from close to shore out to depths of 600 feet. The work was funded with a federal government grant and help from the Florida Fish and Wildlife Research Institute.

About 3 percent of the fish they caught displayed gashes, ulcers and parasites symptomatic of environmental contamination, according to Murawski, the lead researcher. The number of sick fish rose not only as scientists moved west away from the relatively clean and oil-free waters of Florida but also as they pushed into deeper waters off the coasts of Alabama, Mississippi and especially Louisiana, near where the Deepwater Horizon sank.

About 10 percent of mud-dwelling tile fish caught in the DeSoto Canyon, to the northeast of the well, showed signs of sickness.

"The closer to the oil rig, the higher frequency was" of sick fish, Murawski said.

Past studies off the Atlantic Seaboard found about 1 percent of fish suffering from diseases, Murawski said. For now, he's taking that as a historical reference point; but he says it's not possible to directly apply that baseline to the Gulf, which is warmer and because of that an incubator for bacteria and parasites that could be the cause of lesions and sicknesses. Other important differences are that oil and natural gas have been pouring out of fissures from the floor of the Gulf for centuries, and the muddy waters of the Mississippi River flush into the same spots where scientists and fishermen are finding sick fish.

ABOVE: This 2011 photo provided by Donald Waters shows a fish harvested from the Gulf of Mexico with unusual lesions and infections. (AP Photo/Courtesy Donald Waters)

BELOW: This 2012 photo provided by Steven Murawski shows a fish harvested from the Gulf of Mexico with unusual lesions and infections. (AP Photo/Courtesy Steven Murawski)

— Laboratory work over the past winter on the USF samples indicates the immune systems of the fish were impaired from an unknown environmental stress or contamination. Other researchers say they have come to similar conclusions over the past year.

"Some of the things I've seen over the past year or so I've never seen before," said Will Patterson, a marine biologist at the University of South Alabama and at the Dauphin Island Sea Lab. "Things like fin rot, large open sores on fish, those were some of the more disturbing types of things we saw. Different changes in pigment, red snapper with large black streaks on them."

All of this has biologists — and many fishermen — worried.

James Cowan, a reef fish expert at Louisiana State University doing long-term sampling for the Louisiana Department of Wildlife and Fisheries, received his first report of fish with what looked like ulcers in November 2010. He began reading up on what scientific literature was available on oil spills and fish.

"There is so much in the literature that links exposure to PAHs (the compounds in oil) to exactly what we are seeing: sicknesses, lesions and everything else," Cowan said.

Even if oil could be pinpointed as a contaminant, however, it's difficult to definitively tie it to BP's Macondo well. The Gulf is littered with natural oil seeps, pipelines and oil wells and pollution from passing ships. In addition, there are the discharge of the Mississippi River, salinity and temperature fluctuations and other ecological factors to consider.

These early findings with fish are not out of step with what researchers are turning up all over the Gulf two years after the spill: The oil disaster whacked the Gulf. In the past year, research has emerged showing deep-water corals, seaweed beds, inshore bait fish, dolphins and other species were injured by the spill.

"There is lots of circumstantial evidence that something is still awry," said Christopher D'Elia, the dean of LSU's School of the Coast and Environment. "On the whole, it is not as much environmental damage as originally projected. Doesn't mean there is none."

Last year, as a string of fishermen reported problems with lesions, the National Oceanic and Atmospheric Administration advised fishermen to throw suspicious-looking fish back into the water. Fishermen say they've been doing just that to make sure bad fish don't get to dock.

While portions of a few bays remain closed because of the spill, the Food and Drug Administration and state agencies say they've undertaken the most thorough testing ever of seafood from the Gulf and found no problems or concerns of contaminated fish, and researchers agree there is little cause for concern.

"It's not a people issue, and people should not be concerned about fish entering the market," Murawski said.

For the second year, fishermen like Wayne Werner, a 53-year-old Louisiana captain who catches red snapper commercially, are calling in with reports of lesions.

He and other fishermen said they want to get to the bottom of a problem that's forcing them to take longer trips to fishing spots outside the spill zone and perpetuating their fear for their livelihoods.

"Every time we talked about bad fish, everybody kind of went nuts on us. Just like, 'You're hear-saying,' you know? And we're saying, 'Well, they're there,'" he said this week.

"They're still there. Now that the water is getting warm again, we're starting to see more and more again."