The shelf life of Twinkies is the stuff of legend (and mostly nonsense), but beyond the myth and behind the silliness is a kernel of truth; If Twinkies can indeed achieve a fabled longevity, it will have more to do with savvy business practices and innovation than secret, Frankenstein recipe formulations. 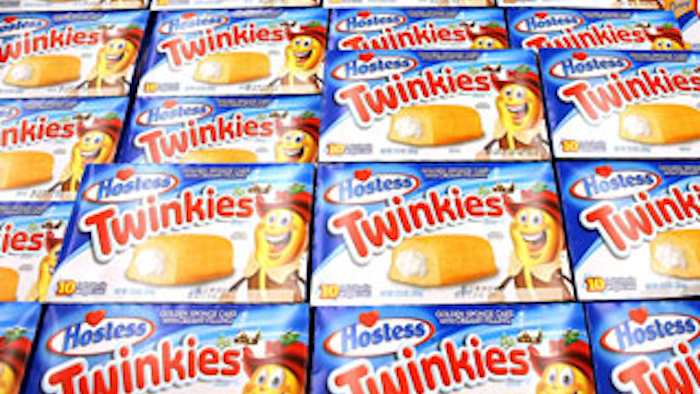 Rumor has it Twinkies are space age products made from such resilient ingredients that they last for decades. The shelf life of Twinkies is the stuff of legend (and mostly nonsense), but beyond the myth and behind the silliness is a kernel of truth; If Twinkies can indeed achieve a fabled longevity, it will have more to do with savvy business practices and innovation than secret, Frankenstein recipe formulations.

Twinkies as well as other Hostess Brands snacks were produced by Continental Baking Company until 1995 when the business failed and Hostess Brands was acquired by Interstate Bakeries Corporation. When IBC itself famously entered into bankruptcy and liquidation last year after years of financial woes, a portion of the company’s assets was purchased in a joint venture between Apollo Global Management and Metropoulos & Co. The new leadership aims to preserve the iconic snack brands while doing away with some of the business practices that got previous owners into financial trouble.

“When Hostess products disappeared last year there was an incredible groundswell of emotion from consumers who couldn’t imagine a world without Hostess snack cakes,” Dean Metropoulos, the new CEO of Hostess Brands, LLC said in a press release. “That’s why we’re here today; America wanted its snacks back — they wanted the original and we’re honored to make that happen.

“We are committed to investing in this company, reinvigorating these beloved brands, innovating to meet evolving consumer preferences with new products and continuing to bake the high-quality, fresh and delicious snack cakes that have given Hostess its enduring appeal,” he added. “Judging by the incredible reception we’ve received, Hostess has a very exciting future.”

This reinvigoration includes a number of strategic modifications to Hostess Brands’ business model.

Hostess Brands, under past leadership, utilized a fleet of Teamsters to deliver directly to grocery stores and other retailers. In addition, the company ran a number of dedicated retail outlets to sell Hostess Brands products.

Under new ownership, the retail outlets will be shuttered and distribution will be modernized. Instead of direct-to-store delivery by a fleet of drivers, Twinkies and other Hostess Brands products will be shipped to distribution centers and then packed into orders to be sent to customers. This distribution model has the potential for significant cost savings for the new owners, as the ability to pack multiple orders together will mean fewer miles — and less gasoline — needed to get each product to its intended destination.

“Clearly retailers and consumers could not wait to have Hostess snack cakes back in stores,” Rich Seban the new President of Hostess Brands, LLC said in a statement. “We are already hearing early reports of products flying out of stores almost as fast as they’ve appeared on shelves. As orders have continued to pour in, we are doing everything possible to fulfill them equally and timely for everyone.”

The company is hoping that this new model will increase Hostess Brands’ reach and visibility.

“Our goal is as simple as it is ambitious: wherever consumers can buy a candy bar, they should be able to purchase a Twinkie,” Dean Metropoulos said in a press release.

In addition to these distribution changes, the retooled Twinkie will see a significant labor reduction. As few as 20 percent of the jobs lost during IBC bankruptcy will return, Natalie Everett, a snack foods analyst with market research firm IBISWorld,told CNN Money.

Hannah Arnold, a spokesperson for Apollo and Metropoulos, however, mentions to CNN Money that comparing total employment levels to previous Hostess incarnations is likely not useful, as Apollo and Metropoulos only purchased a portion of IBC’s assets. Indeed, the company purchased only five Hostess bakeries and has plans to operate only four of those facilities.

In addition to these factors, companies that buy iconic brands like those produced by Hostess invest in equipment and machinery to replace laborers — which could be part of the reason some jobs will not return, according to Everett.

“We live like gods, and we don’t even know it,” begins economic historian Tom Streithorst in “Post-Scarcity Economics,” published July 11 in the Los Angeles Review of Books. His essay focuses on the rapid changes in automation and technology that have allowed manufacturers (among other businesses) to make more and better products delivering consumers conveniences beyond belief.

He argues that not only have these advances created more products for consumption, but that we can produce these products with fewer workers than ever before. Streithorst sees a world in which supply has exploded but demand remains stagnant, a world in which fewer workers are paid to make more products, meaning dwindling wages with which to purchase the glut of merchandise suddenly and widely available.

“Back in the 1970s, pop stars sang songs about of the tedium and anomie of factory work,” writes Streithorst. “Today the sons of laid-off autoworkers would trade anything for that security and steady wage.”

At a tradeshow a few years ago, an executive told me his favorite employee was “Otto” (as in “Otto-matic”): he never gets sick, he never complains and his kid never has to go to the dentist.

And while the new Hostess model will clearly rely on competent and reliable workers to operate complex machinery, take orders and ensure the integrity of food safety systems, replacing human labor with automation where possible has the potential to increase efficiency and lower costs for Apollo and Metropoulos.

Changes in production will not only impact plant workers and drivers, but seem to have some impact on the products themselves as well.

Reports indicate the new Twinkies are smaller than previous incarnations of the product. And in a move that is sure to revive talk of Twinkies that stay fresh forever, the new Twinkies have reportedly nearly doubled their shelf lives — from 23 days to a staggering 45.

“No surprise that Twinkies are smaller,” said Anthony Michael Sabino, a business professor at John's University's Peter J. Tobin College of Business. “The iconic treat’s new owners want to be certain they don’t repeat the mistakes of Twinkies’ prior owners, whose inability to cover costs drove them into bankruptcy twice… You take a beloved but money-losing brand, reshape its finances, and crank out the newer, albeit smaller version.  It’s worked with airlines and carmakers.  Why not America’s most beloved snack food?”

Eatocracy's Kat Kinsman put the new Twinkies to the test for CNN Money and found some surprising differences between the revived Twinkies and the ones she remembers.

But, Kinsman admits, the new Twinkies retain their nostalgic charm. Daren Metropoulos, principal of Metropoulos & Co. said in a press release, “This comeback has created a once-in-a-lifetime opportunity to leverage the nostalgic sentiment and, at the same time, reintroduce the Hostess brand with a bolder attitude and a more contemporary voice.”

The Twinkie of Tomorrow

Apollo and Metropoulos have been transparent about their new plans for a brand that has seen its share of trouble. Twinkies face an uphill battle considering their rocky past and a future that looks to be bending more toward healthy and natural than sweet and highly processed.

But Apollo and Metropoulos are hoping that their updated business model along with the strong nostalgia associated with Twinkies and other Hostess Brands products will help drive future success.

“Hostess has an inherent cool factor — a magical quality that has transcended time and trends and given the brand a lasting appeal, generation after generation,” Evan Metropoulos, principal of Metropoulos & Co. said in a statement. “There’s no question the Hostess brand is back — and back big.”