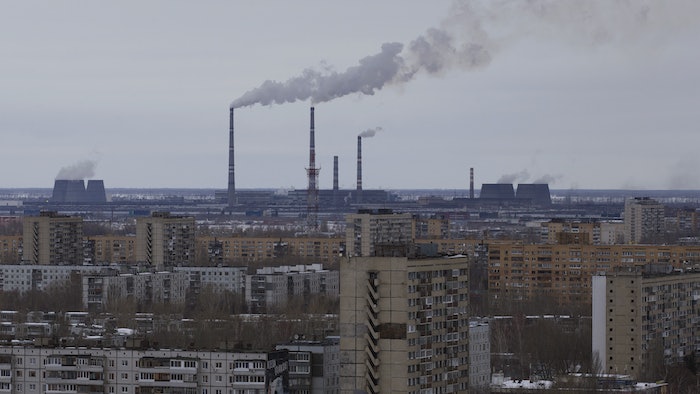 In this photo taken Wednesday, Feb. 17, 2016, buildings of the AvtoVAZ car plant is seen above the residential buildings at the bottom of chimneys in the southern city of Togliatti on the Volga River, Russia. Once intended as a Soviet rival to the capitalist symbol of Detroit, Russia’s auto-making hub is sliding into economic depression. (AP Photo/Ivan Sekretarev)

Security Worker Found Dead Inside Ohio Steel Plant: A security worker at a steel plant in Ohio may have died from nitrogen exposure, federal investigators said. The Occupational Safety and Health Administration said the 32-year-old worker was found dead inside TimkenSteel's Faircrest Plant in Canton. The agency said nitrogen that's used in the plant flooded the air and caused oxygen levels to drop where the worker's body was found. OSHA is working with TimkenSteel to figure out if the nitrogen system has affected oxygen levels in other areas.

Russian Factory To Declare Bankruptcy, Workers Still Unpaid: Two days after industrial workers at a plant in eastern Russia threatened to go on hunger strike over unpaid salaries, the company is due to declare bankruptcy. The Primorsky regional administration announced last week that the government-owned electronics manufacturer Radiopribor will declare bankruptcy and become a subsidiary of the Dubnensky car factory. Russian media on Tuesday reported that approximately 1,000 factory workers had said they would go on hunger strike if there was not a favorable outcome to talks with the Radiopribor administration over eight months of unpaid salaries.

OSHA Finds West Virgina Saw Mill Workers Exposed To Dozens Of Serious Violations: OSHA has issued citations for one willful, 24 serious, and two other-than-serious violations against Kenneth Snider Inc., a Princeton, WV-based saw mill. OSHA said an investigation it began in October 2015 included an onsite inspection in which employees were observed within inches of an unguarded saw — the willful violation. OSHA also cited Kenneth Snider for not having a hearing conservation program for workers exposes to noise above the permissible limit over an eight-hour period, and failure to provide hearing protection. OSHA has proposed penatives of $59,000.