How Does Shell’s Environmental Record Stack Up?

Before we pack our parkas and head north, let’s review the reality behind a some of Shell’s environmental record and see how the company’s rhetoric stacks up to its history in dealing with disasters. 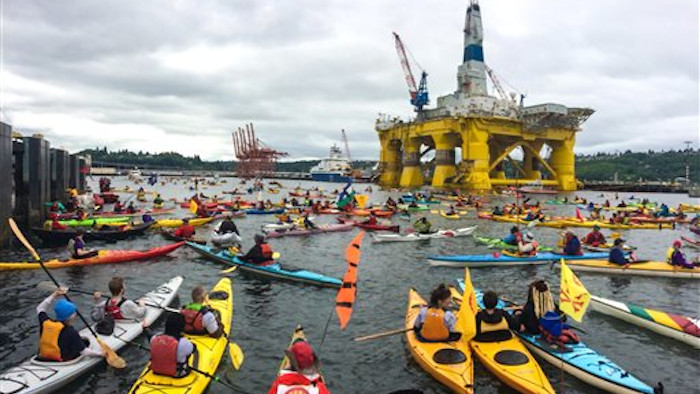 The cold reaches of the Arctic have been the focus of heated debate this week. After Royal Dutch Shell floated a massive oil rig into a Seattle port to ready it for Arctic drilling exploration, hundreds of activists took to kayaks and the streets to protest. Their main complaints?  The risky nature of Arctic drilling endeavors and Shell’s contributions to global warming by selling fossil fuels.

The colorful kayaks made for stunning photos, but unsurprisingly, have done little to halt Shell’s inevitable march to the top of the earth, which holds an estimated 13 percent of the world’s undiscovered oil.

In response to the environmentalists argument that Shell should be helping the world shift away from fossil fuels and toward renewables, Shell’s CEO, Ben van Beurden, defended the oil giant’s interest in the Arctic.

Reinforcing the idea that the world won’t be able to keep the lights on without fossil fuels, he said at a shareholders meeting, “If there will be no further investments in oil production, the gap between supply and demand could be 70 million barrels per day by 2040 ... we will need sustained and substantial investment just to meet the demand to fuel economic growth especially in the developing world.”

To its credit, Shell has also invested in several companies developing renewable solutions, including biofuels, wind power and solar.

When it comes to the environmental risks, van Beurden said the company has oil spill response technology that would allow it to deploy equipment to the site of any accident within an hour.

“We are actually also doing what I believe is unprecedented and over and above requirements that a regulator would set,” van Beurden said. “We have gone to tremendous lengths to make sure we understand the risks.”

In theory, the logic behind the need for eventual Arctic drilling seems reasonable, even if we’re currently producing so much oil in the U.S. that we’re running out of places to keep it. Then again, the environmental concerns are grounded in that reality that accidents are part of the oil game — and like every oil company, Shell has had its share of hiccups.

So before we pack our parkas and head north, let’s review the reality behind a some of Shell’s environmental record and see how the company’s rhetoric stacks up to its history in dealing with disasters.

Major spills and fires at the Martinez, Calif. refinery: In the 1980s, Shell’s Martinez refinery was the scene of several accidents. In 1986 the plant unleashed 48,000 gallons of toxic wastewater into a local waterway. Shell was later fined $75,000 for being negligent in not repairing a stuck valve.

Then, in 1988, the refinery spilled 440,000 gallons of crude, contaminating nearby wetlands and shoreline. Shell did not report the incident for four weeks and was fined $19.8 million by the EPA.

River Mersey spill, UK: In 1989 a Shell pipeline leaked 150 tons of thick Venezuelan crude into a river in the England. The spill created a 20-mile slick and according to one report, killed at least 300 sea birds, while putting another 2,000 at risk of oil ingestion.

Local authorities said Shell made the incident worse by attempted to flush out the pipeline with lighter crude and water to stop oil from backing up in the pipe. Shell was eventually fined 1 million pounds by the Liverpool Crown Court for the pollution.

Nigeria Delta oil spills: Two massive spills in Nigeria in 2008 and 2009 unleashed so much oil that officials estimated that it could take 20 years to completely clean up.

Shell was widely criticized for its handling of the disaster, as many believed the company initially attempted to downplay the damage. The harm to local wildlife caused by spills from the continued presence of eroding pipelines in the area has also prompted mass protests by local Nigerians. Earlier this year, Shell finally agreed to pay $84 million to residents in the delta.

Worker deaths and spill on the North Sea: The most damning evidence against Shell’s claim it can drill safely in the Arctic is its record in the North Sea, where the waters are much tamer and it’s considered safe to operate.

Since 2000, Shell has been fined numerous times for safety lapses on North Sea rigs. One of the worst incidents happened in 2003, when two workers died on a North Sea platform in an accident that union officials said could have been prevented if Shell would have repaired a neglected lift and stairs.

Shell’s operations have also caused numerous spills in the North Sea. In just one six-month period alone, a government report revealed 20 pollution accidents. Though most of the spills were minor, in 2011, one of Shell’s North Sea rigs spilled 200 tons of oil. Environmentalists criticized Shell for not being transparent enough about the incident as it unfolded.

The Kulluk debacle in the Arctic: In 2012, Shell’s first foray into Arctic waters quickly ended in disaster. Just days after floating away from the shores of Alaska, Shell’s drilling rig, Kulluk, broke free from its tow ship and floated out of control for four days. The 18 workers aboard the ship had to be rescued by helicopter and the vessel finally ran aground in freezing, storm-battered waters.

Luckily, the Kulluk’s steel fuel tanks (holding 150,000 gallons of diesel fuel and lubricants) held firm and there was no environmental damage. But the incident cost Shell dearly and showed just how treacherous and unpredictable Arctic drilling is going to be.