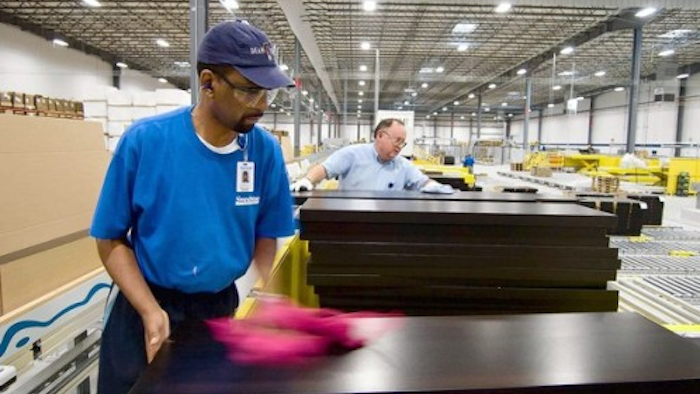 Bradley J. Holcomb, CPSM, CPSD, chair of the Institute for Supply Management (ISM) Manufacturing Business Survey Committee states, “The past relationship between the PMI and the overall economy indicates that the average PMI for January through April (52.4 percent) corresponds to a 2.9 percent increase in real gross domestic product (GDP) on an annualized basis. In addition, if the PMI® for April (51.5 percent) is annualized, it corresponds to a 2.6 percent increase in real GDP annually.”

ISM’s New Orders Index registered 53.5 percent in April, an increase of 1.7 percentage points when compared to the March reading of 51.8 percent, indicating growth in new orders for the 29th consecutive month. A New Orders Index above 52.1 percent, over time, is generally consistent with an increase in the Census Bureau’s series on manufacturing orders (in constant 2000 dollars).

ISM’s Production Index registered 56 percent in April, which is an increase of 2.2 percentage points when compared to the 53.8 percent reported in March, indicating growth in production for the 32nd consecutive month. An index above 51.1 percent, over time, is generally consistent with an increase in the Federal Reserve Board’s Industrial Production figures.

The Inventories Index registered 49.5 percent in April, which is 2 percentage points lower than the 51.5 percent registered in March, indicating raw materials inventories are contracting in April following three consecutive months of growth in inventories. An Inventories Index greater than 42.9 percent, over time, is generally consistent with expansion in the Bureau of Economic Analysis (BEA) figures on overall manufacturing inventories (in chained 2000 dollars).

ISM’s Imports Index registered 54 percent in April, which is 1.5 percentage points higher than the 52.5 percent reported in March. This month’s reading represents 27 consecutive months of growth in imports.

The ISM Prices Index registered 40.5 percent in April, an increase of 1.5 percentage points when compared to the March reading of 39 percent, indicating a decrease in raw materials prices for the sixth consecutive month. In April, 7 percent of respondents reported paying higher prices, 26 percent reported paying lower prices and 67 percent of supply executives reported paying the same prices as in March. A Prices Index above 52.1 percent, over time, is generally consistent with an increase in the Bureau of Labor Statistics (BLS) Producer Price Index for Intermediate Materials.